On the other side of the globe, the folks at Universal Studios Japan have been privileged to receive a giant replica of Resident Evil’s Raccoon City full of zombies you can shoot with laser training guns. It’s something many people here in the US have wanted for decades on our own soil… 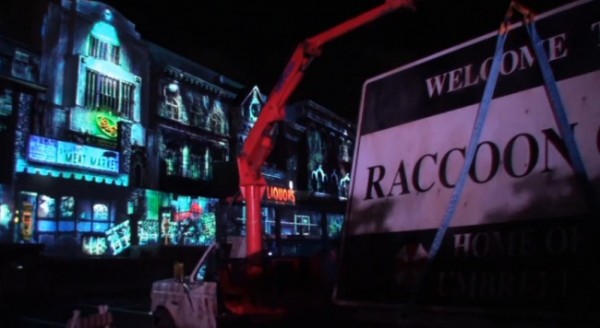 But now that wait is over.

LAtimes.com has released information regarding a giant zombie invasion scenario where you get to shoot your way through hordes of zombies…and it’s coming this Halloween season!

Coming this October, Buena Park’s own Knott’s Halloween Haunt will transform Camp Snoopy into a zombie free-for-all called Special Ops: Infected. Players will be armed with an M4 replica laser weapon as they battle through Camp Snoopy’s 6 acre area.

But don’t expect to be there all day, squadrons of 12 people have 15 minutes to just “kill as many zombies as you can” while completing a series of objectives. The squads will depart from two different outposts and led by two commanders that will take people to the kill zone. There will be 6 squadrons at any one time inside the area and is expected to cater to at least half of the Haunt crowd on any one day. Once at the kill zone, you’re dropped into a live zone filled with around 135 zombies!

A small band of militia members that are more anti-government than pro-zombie will confront each squadron at some point during the mission. A mad scientist who knows what caused the zombie apocalypse and how to stop the outbreak also factors into the scenario.

Based on a M4 carbine, the custom-made infrared laser weapon carried by each recruit will be similar to the mock guns used by military and police training academies. Rifle-mounted LCD screens will record every player’s kills, accuracy and points. Armed with unlimited ammo, each player will score kills by shooting zombies in the head and get “bitten” every time a zombie comes within a 10-foot radius.

At the conclusion of every mission, winners will be declared “war heroes” and losers branded “infected.” Top scores will be displayed on monitors throughout the theme park.

Inspired by movies like “World War Z,” television shows such as “The Walking Dead” and video games like “Resident Evil,” the Special Ops: Infected attraction is a high-risk/high-reward gamble for Knott’s.