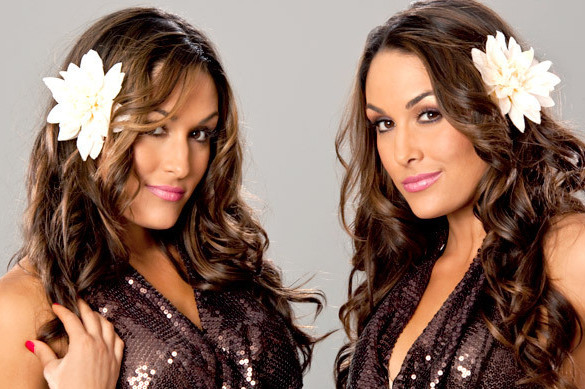 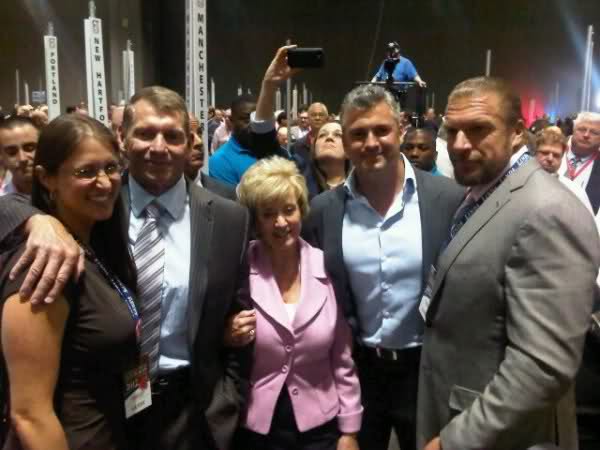 For those that have lived under a rock for the last 30 years, the WWE is primarily run by the famous (infamous?) McMahon family. Way before the Vince McMahon we know, there was Vince McMahon Sr. (Yes, the Vinnie we know is actually a Jr.) and he set the foundation for what would become WWE by running a company called WWWE (yes, 3 “w”s) or the World Wide Wrestling Federation.

But this is obvious information. What a lot of people may not know is that there are a lot of families that work under the WWE banner, siblings, sons, daughters, cousins, etc. and I believe that these families have kept WWE going strong all these years.

Let’s get into the families within the WWE infrastructure. While this may not be EVERY family represented, these are the some of the more prominent ones today. 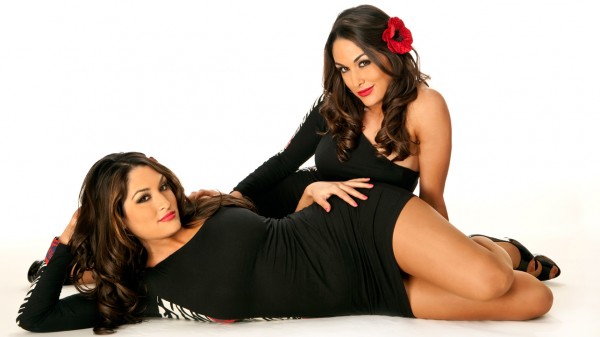 The most obvious family example (aside from the McMahons) are the Bella Twins, Nikki and Brie (real names Nicole and Brianna Garcia-Colace). Beautiful and dangerous, they’ve been the talk of Hollywood with popularity of E! Network’s Total Divas and they’ve been featured in major story lines within the WWE Universe. “You can look, but you can’t touch” is their intro song and they make sure you’re getting an eyeful. Unfortunately, with Nikki dying her hair and Brie marrying Daniel Bryan (in real life, now Brianna Danielson), the two aren’t the identical twins as they used to be; their signature move “Twin Magic” in which they switch during the match to gain the advantage, became nullified the moment Nikki went under the knife and got a little “Twin Magic” of her own (breast implants if you didn’t get that). 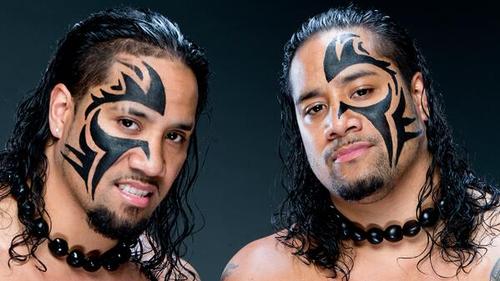 The next obvious example of family comes in the form of the current Tag Team Champions, Jimmy and Jey Uso (real names Jonathan and Joshua Fatu). Another set of twins, these Pacific Islanders have been consistently stealing the show since 2010 and are looking to defend their Tag Titles at Night of Champions against another set of brothers, currently known as… 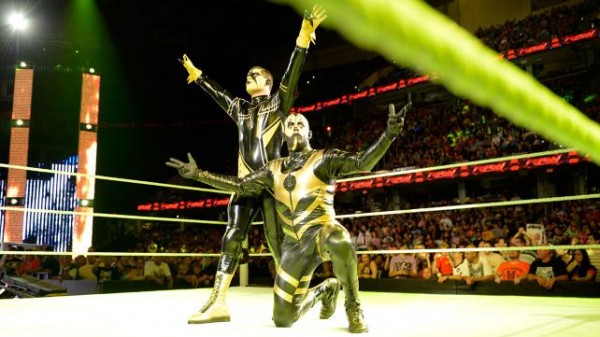 Goldust (real name Dustin Runnels) isn’t a new wrestler, in fact, he’s been an active wrestler since 1995, bouncing between WWE, WCW, All Japan Pro Wrestling, TNA, and various independent federations. He’s wrestled under his real name Dustin Runnels, Dustin Rhodes, and Black Reign, but he’s famously known for his androgynous latex-clad “bizarre one” character Goldust. Last year in 2013, he’s partnered up with is real life half-brother Cody Rhodes (real name Cody Runnels), who hasn’t had much breakout success since his debut. When they teamed up, it seemed like magic, they won the Tag Team Titles and just had an amazing dynamic. After they lost the titles, the rumors of a possible brother vs. brother conflict at this year’s Wrestlemania gave the opportunity for WWE to make a nice bait and switch and “reform” Cody into the wildly eccentric Goldust clone, StarDust (who, I think, looks like an oversized Rockstar can). Now it seems like the two are in full throttle, turning heel (becoming bad guys) and causing a ruckus. They are due to face the Usos at Night of Champions to get back their Tag Team Championships.

Randy (real name Randall Orton) and father Cowboy Bob Orton (real name Robert Orton) aren’t seen together much, but it seems the transition between the Golden Age of wrestling in the 80’s and the Modern Age of today. While Cowboy Bob doesn’t do much nowadays, his son Randy has become a 12-time World Champion. And if you think that’s legacy, check out… 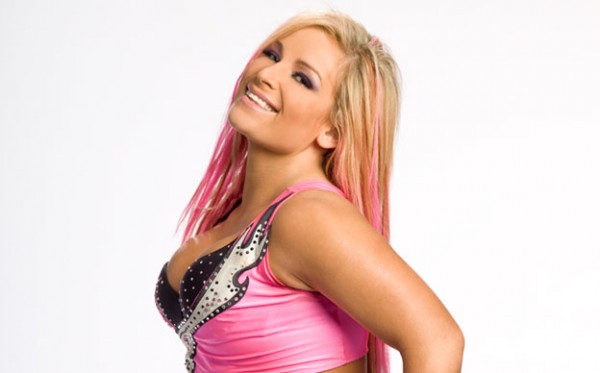 Waaay back when there was the Hart Foundation, wrestlers Bret Hart and Jim Neidhart (no relation) made a huge scene in WWE in the 80’s. Both trained under Bret’s father Stu in the infamous Hart Family Dungeon and, even though they weren’t related, they soon would be. Jim married Bret’s sister Ellie, and had a baby Natalie.

Well that baby grew up proper as she is currently a WWE diva. Related to Bret, (the late) Owen, and (the late) British Bulldog, among others, she’s got a pedigree that’s full of amazing quality.

And here are the ones that you may not know about: 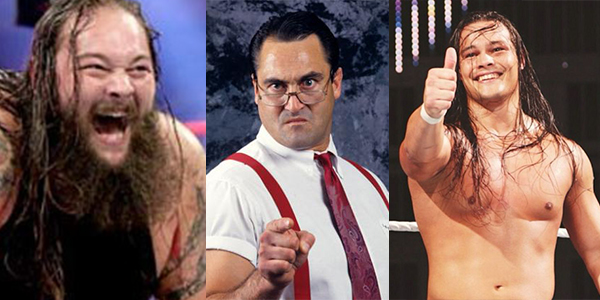 Mike Rotunda made his debut in the WWE as Irwin R. Shyster in 1991 after several attempts to create a character that would click with the audience. What he probably didn’t know was that he would create a legacy that shines today in his two sons, Windham Rotunda and Taylor Rotunda, better known as Bray Wyatt and Bo Dallas respectively. And, just like their father, both men have gone through some “refining” before settling on their current character; Bray was previously “Husky Harris” formerly of the Nexus faction and Bo had previously competed in the 2013 Royal Rumble match and was headed to the main roster, when he was suddenly taken back to the minors (NXT) to “repurpose” his character. There has been no move to put the brothers together on TV, let alone reveal that they are brothers. Still, they do share that creepy smile… 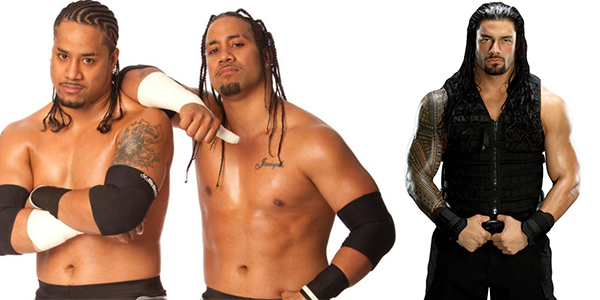 This one may be a little harder to catch, but something to note. We’ve already talked about the Usos being twin brothers, but the Usos are also related to the fast rising Roman Reigns. They are cousins. And if you think that is pretty cool, these three are also related to former superstars Rikishi (father of The Usos), Jamal and Rosey (3-Minute Warning…Jamal would later become Umaga), and even The Rock.

Of course I can also mention many other related superstars…I haven’t even touched the ones that married in like HHH/Stephanie McMahon, Naomi/Jimmy Uso, Tyson Kidd/Natalya, Miz/Maryse or other parent/child relations like Mr. Perfect/Curtis Axel and Jimmy Snuka/Tamina Snuka. Do I even have to mention the Guerrero’s?

I guess when it comes to wrestling, it’s truly a family business. 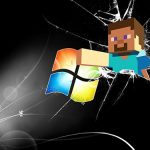 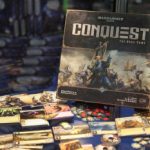