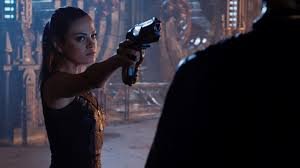 Jupiter (Mila Kunis), so named by her astronomer father (James D’Arcy), is a janitor stuck with her Russian immigrant family until Caine (Channing Tatum) rescues her from aliens with his gravity surfing boots. It turns out Jupiter is the long lost descendant of a space kingdom.

I really liked the first half of Jupiter Ascending. It’s the same old nonsense mythology but I’d rather see the Wachowskis’ version of it. At least they’ve got alien egg harvesters, a space harem and robot/alien bureaucracy to keep it creative and entertaining. The human characters are as cartoonish as any aliens, like the Russian cousins. The fabulous wardrobe changes Kunis makes throughout the film could only be a celebration of ridiculous costume.

The Wachowskis still know how to make an action scene work. The action in Jupiter Ascending is busier than ever, but it still has the fundamental build and flow. At least while it’s earthbound. Once they get into space, it’s too much green screen, and green screen that looks like green screen. The Matrix green screen still mimicked our world (because it was the matrix) and Speed Racer transitioned green screen scenes together to create bigger ones. In Jupiter it’s just stuff crumbling behind the actors, at best. Usually it’s actors sitting on thrones in front of green screened backgrounds. The climax is just dead weight.

The ultimate plan of the Abrasax royals is essentially the same as the matrix turning people into batteries. It’s a little lighter and more absurd, because it’s not Bound (see what I did there?) by pseudo-realistic techno-sci-fi. No one would have accepted the bureaucracy scene in The Matrix, although Matrix Revolutions could have benefited from it.

The main disappointment of Jupiter Ascending is that it cannot maintain its weirdness and settles right into the “defeat the evil kingdom/fulfill your true love” story that’s mediocre. Some other small technical quibbles include Tatum’s blonde goatee. Flamboyant facial hair is great but there must be some kind of dye you can use that doesn’t look like space frost. It never looks like that color is growing out of Tatum’s face. The 3D is worthless, although I had to see it in Dolby 3D. Maybe IMAX 3D uses it to some effect. Anyone can choose to see it in 2D though and get just as much out of the crazy first half, and figure that this is the extrapolation of the rest of the plot of Moonquake Lake.