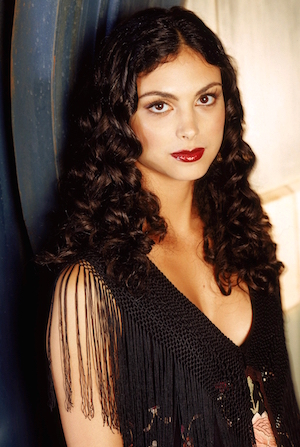 Morena Baccarin has joined the cast of Gotham this season. Dr. Leslie Thompkins met Jim Gordon (Ben McKenzie) when he was demoted to guard at Arkham Asylum. After an inmate literally tried to take over the asylum, Leslie has joined the Gotham City police force, and sparks continue to fly with Jim Gordon.

The Gotham cast had a meet and greet snack break for the Television Critics Association and I got some time with Baccarin one on one to talk about her new character and her role in Gotham. Gotham airs Mondays at 8 PM on Fox.

Nerd Report: Was it an audition or an offer to be on Gotham?

Nerd Report: When they offered you the role of a doctor in Arkham Asylum, did you feel how monumental that was in the world of Batman?

Morena Baccarin: I wasn’t sure. In the process of speaking to Bruno and sussing out if it was the right thing for me to do, I realized it was going to become a very big part of the world. So that excited me because I really liked the look of the show and the actors, the writing, everything about it.

Nerd Report: Had you heard the name Arkham before? There’s a whole series of games named after it and it’s in a lot of the movies.

Morena Baccarin: I know. To be honest, I hadn’t. I’m not a big comic book buff but as soon as it was described to me and I read the episode I would be in, I thought wow, this is such an interesting world.

Nerd Report: Did it start out as just one episode and grow?

Nerd Report: What are we going to see coming up on Gotham?

Morena Baccarin: Well, you will see our romance blossom. They have a really great relationship and a good rapport back and forth. We kind of pair up and are able to deal with the corruption of Gotham together. Then she starts to work at GCPD as a medical examiner so there’ll be a little bit of fighting crime together and occasional date nights.

Nerd Report: Are you sort of in a CSI show yourself?

Morena Baccarin: A little bit, but I think what’s great about the procedural aspect of this show is that it doesn’t get too bogged down by the details of it. It’s more about the fantasia of it, introducing phenomenal new characters and villains through the crime scene.

Nerd Report: On CSI or Bones they have to analyze real science.

Nerd Report: So do you get a lot of fantastical made up chemicals that these supervillains are inflicting on Gotham?

Morena Baccarin: Sometimes, or real things that are used in a fantastical bizarre way. Like, we are introducing Scarecrow and the way it comes about is in a very medical way.

Nerd Report: Do you come face to face with Scarecrow?

Morena Baccarin: I do not personally but I am behind the scenes helping figure out how he’s working, how he’s operating.

Morena Baccarin: Actually, that’s a really good question. I don’t think that they’ve talked about it. Actually, that’s not true. It doesn’t happen on camera. She does talk to him and calls him on his sh*t a little bit about not allowing me in, even though the last relationship he was with somebody that couldn’t handle it. What I say to him is I can handle it, but you’re not allowing me to handle it. So there’s obviously been a conversation about the past.

Nerd Report: Jim may still be on the rebound.

Nerd Report: Could a character like Leslie cut through to him?

Morena Baccarin: I think so. I’d like to believe Leslie’s around for a bit but we’ll see.

Nerd Report: Does Leslie have a relationship with Harvey Bullock?

Morena Baccarin: Not yet. Because I start to work with GCPD, we have exchanges. In typical fashion, he’s not very happy about the fact that I’m his girlfriend and working there at the same time.

Nerd Report: Does Gotham really have rules about inter-office dating?

Nerd Report: They just have so many other problems, I can’t imagine they’d care about workplace relationships?

Morena Baccarin: They don’t. We do and he does.

Nerd Report: After doing three seasons of a very intense cable show, has it been hard to come back to network?

Morena Baccarin: No, it’s been great. They’re just very different shows and there are different things about them. Just different is what I’d say.

Nerd Report: On V you had a lot of green screen work. Is Gotham a lot more practical?

Morena Baccarin: Yes, it is. They create the world in a physical way and that’s really nice.

Nerd Report: They’re still doing Firefly comic books. Have you kept up with any of that?

Morena Baccarin: I haven’t. It’s frustrating to see it go on and not be the one portraying it, so I don’t really read it. But I think it’s great that the fans have something to read and something to look forward to.

Nerd Report: I didn’t think about how hard it could be for you to see a comic book of yourself.

Morena Baccarin: Yeah, I’d rather be doing it. [Laughs]