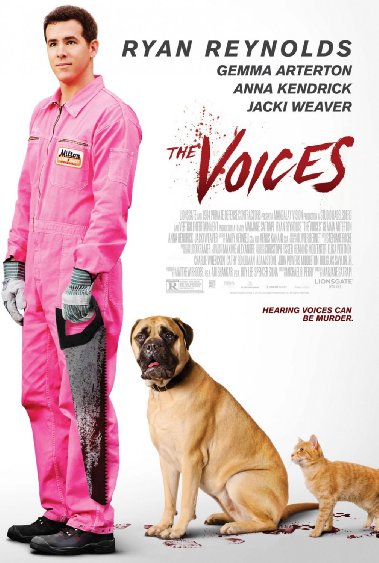 I missed The Voices at Sundance last year so I’ve been waiting for it to be released. Here I am, back from the most recent Sundance, and The Voices is now making its way into theaters and VOD.

Jerry (Ryan Reynolds) is a meek, awkward guy at the office. He can’t get a date with his dream girl Fiona (Gemma Arterton) but at home his cat and dog talk to him. This isn’t a happy talking animals movie like Dr. Dolittle though. This is the dark tale about what the voices mentally ill people hear tell them to do.

The Voices is a dark comedy, emphasis more on dark than comedy, and it goes there. It maintains a creepy tone throughout but it’s sensitive to Jerry too. This is a man with legitimate mental issues and you root for him to get better, but his setbacks are scary and tragic.

Reynolds has always been a good actor relegated to comic relief parts. The Voices allows him to play a sympathetic yet frightening character. There’s no defense mechanism of one-liners for Jerry. Jerry is overwhelming so you can understand why most people wouldn’t have patience for him, and may be better off for it. That’s why Jerry gets to be the central character of a movie, so we have to consider what makes the Jerrys of the world the way they are, and how we can help them, if we can at all.

The animal voices aren’t particularly funny. They’re vulgar and confrontational, which may be amusing coming from a dog and a cat. I think they speak much more to the truly dangerous mental state Jerry is in. There are several weird, surreal sequences that add to an unsettling, unstable tone, whether they are in Jerry’s head or actually happening.

The Voices opens in theaters and VOD on Friday so you can take your pick where to see it. I recommend it either way.