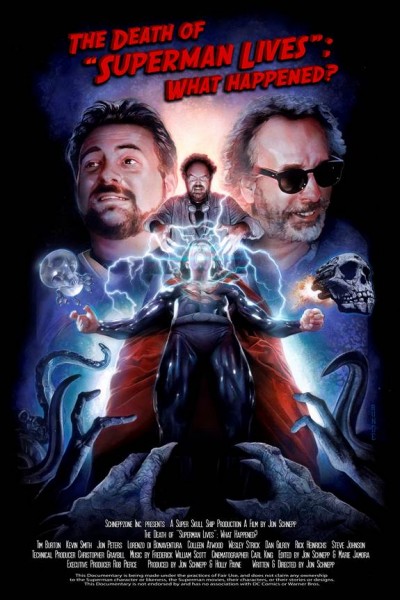 Kevin Smith attended the third screening of The Death of Superman Lives: What Happened? on Saturday. Smith appears in the documentary speaking about his experience writing the first script for Superman Lives, which would later be rewritten by Wesley Strick and Dan Gilroy. Fans of Smith know the story of his meeting with producer Jon Peters very well from his Evening with Kevin Smith DVD. Director Jon Schnapp interviewed Peters as well, so this was the first time Smith has heard Peters’ side of the story.

“I’ve been telling that story and he never told his side,” Smith said. “When I watched the movie, I was like oh my God, he’s exactly the way I described him. All the years I’ve been telling that story, the one line people always thought was funny, after I pitched the movie he goes, ‘You and me are going to do a great job on this. You know why? Because you and me are from the streets.’ He said nine times, ‘I’m from the streets, I’ve gotten in 500 fights.’ He’s amazing. He’s a character. I was so delighted because I hadn’t seen him since ’96.”

One thing Peters refutes is that Smith says he insisted Superman never fly. Peters tells Schnapp that of course Superman would fly. That doesn’t bother Smith.

“I was delighted by that but I remember exactly what happened,” Smith said. “Also the rest of his interview, for me I was like, well, even though he says he didn’t, he kind of contradicts himself a few times and what not. I didn’t represent him as anything but what’s up there on the screen. It might be a matter of semantics in terms of him going, ‘I never said I didn’t want to see him fly.’ He did see that literally. He’s like, ‘I don’t want to see him f***in’ fly.’ But they wanted to do the leap tall buildings thing more than anything else. The compromise was I never wrote that he flew in the script. I was like: There’s a red bolt through the sky and then blur.”

Smith even has more Peters stories.

“I hadn’t seen him since the Chasing Amy premiere. He came out of it and I go, ‘Did you like it?’ And he goes, ‘It’s cheap.’ because he’s used to making big movies. I go, ‘Yeah, it was low budget. We made it for $250,000.’ He goes, ‘I liked the gay guy,’ the character Dwight Ewell played. He goes, ‘I liked the gay black dude. We should put him in Superman.’ I said, ‘Right on, Dwight’s an excellent actor.’ He goes, ‘No, no, no. Not the actor. We need a gay voice. Can we make the robot sound like that?’ We had this conversation outside the premiere of Chasing Amy about trying to turn L-Ron into a gay robot. This was oddly progressive but really weird.”

The script Smith wrote is readily available online, but he is fairly self-critical about his work, calling it fan fiction. Even though it was based on the “Death of Superman” comic book series, Smith added his own twists.

“In the beginning, the Krypton scene, you have to give them Kryptonian names, like Jor-El of course. I was so self-referential and masturbatory there were characters named Dan-Tay and Ran-Dal. It really was fan fiction.”

The Death of Superman Lives also features Tim Burton, who was set to direct the movie, costume designer Colleen Atwood and then president of Warner Bros. Lorenzo di Bonaventura. Everything after his own involvement was news to Smith.

“I remember I went to eat dinner at Lorenzo’s point,” Smith shared. “I really f***ed up my future by not taking it seriously. I went to eat at Lorenzo’s. They liked the script. He particularly liked the script that I had done. He made me this proposal and I only just remembered now. He was like, ‘Warner Bros. has all these comic book characters and we don’t do anything with them. We only ever talk about Superman and Batman. There’s a wealth of other characters.’ I was like, ‘Yeah, you could do Green Lantern, you could do Justice League, build an entire universe.’ No lie, I swear to you this happened, he goes, ‘How would you like to do that? How would you like to work here at the studio and build a universe?’ In my 26-year-old mind, all I could hear was, ‘You’re gonna steal my indie soul? F*** you, studio man!’ Because I’m not Joss Whedon, obviously. I had no vision and I couldn’t see this could be a real thing. So I remember sitting there being like, ‘That’s nice but that sounds like an executive job.’ It never came to pass. I was going on to make Dogma. I was up my own ass.”

The film ends when Warner Brothers cans Superman Lives, but it seems there was even more to the story. I’d never heard who else was considered to step in for Burton.

“Robert Rodriguez was going to direct it at one point,” Smith said. “I’m pretty sure it was after Tim Burton had backed out. Google when The Faculty was made. I remember it was down to two movies. I remember Robert called me, and I didn’t know him that well. He’s like, ‘Hey man, I’m reading this Superman script Warner Bros. wants me to direct.’ I was like, ‘Holy sh*t, that would be amazing. You should direct it.’ He goes, ‘I don’t know the character that well’ and he went through the stuff on the phone with me. I was like, ‘Please do it, dude. I’ll stay there the whole time. I’ll write with you.’ It died there but that conversation, at one point right before we made Dogma, since he called me I had this long dark night of the soul right before we made Dogma because it was too big for me I thought. I called Robert Rodriguez and I was like, ‘You doing Superman?’ He goes, ‘No, I decided to do The Faculty. I owe Harvey and Bob.’ I said, ‘Great, you really do own Harvey and Bob and I’m making a movie with Harvey and Bob called Dogma. Would you direct it? Because I’m terrified right now.’ He talked me off the ledge. He was like, ‘You can make that movie Kevin. I read it. It’s not that difficult. There’s not a lot of exploding sequences. Just take your time.’ And he really talked me through it.”

One last story about Smith writing Superman Lives. As the slacker icon who brought Clerks to life, Smith almost missed the deadline for his first draft.

“Like so many things in life, the idea of getting the job was fantastic and once I had the job, I was like I don’t want this. For a while, I didn’t take it very seriously. They chased me for that script for a while. One day they called my agent and said, ‘If we don’t get a draft by the end of the day today, we’re taking him off the project.’ I had only written 30 pages at that point. So I said to my agent, ‘What do you do?’ He’s like, ‘You’d better write the rest of it.’ I was like, oh, I got a better idea. So at the end of the day, I faxed them 120 blank pages. Then I got a phone call, ‘They got 120 blank pages’ and I was like ‘Oh, f***, I must’ve put it in upside down.’ That’s the slacker mentality, man. Bought myself a weekend and wrote the rest of the script. If I had been smart, I’d have poured my heart and soul into it and it wouldn’t be the Marvel Cinematic Universe but it would’ve been something cool. Instead, I half assed it.”

The most famous part of Smith’s Jon Peters story is that Peters wanted Superman to fight a giant spider, something he ultimately put into the box office bomb Wild Wild West. One audience member asked Smith the valid question, what’s wrong with a spider? Superman fights lots of things, so aside from what it became in Wild Wild West, why couldn’t Superman fighting a spider be cool?

“Look, I wasn’t against the spider,” Smith said. “Obviously I wrote it into the script. It wouldn’t be my first choice. In a rich world of DC comics, there’s a billion characters you could pull to have him punch instead of the spider. So as a fan, that’s how I reacted. I was like I’d rather see him hit Braniac, Doomsday or Deadshot instead of creating a monster for him to fight. Also, I don’t like to hurt animals. I don’t even step on ants. If a fly’s in the house, I catch him and release him. So the idea that he’s beating up this spider from some other world who’s like, ‘I didn’t want to do this. They’re making me fight you.’ Honestly, it was more just about I’d been waiting for years to see another Superman movie. Last one we saw him fight Nuclon, a fake made up character. The dude scratched his neck. So in this world, wouldn’t it be great if he fought somebody else? And he fights Doomsday in the movie but the idea of the spider just never captured my imagination, but I didn’t fight it. I wasn’t sitting there going, ‘This is horse sh*t.” Ever since it was explained to me until this moment in time, I always muse about it because I find it really funny, especially because he was the guy driving the spider. It was all Jon Peters’ vision. If that spider had come from a comic book, I’d have no problem with it but I know where it came from. He literally told me where it came from.”

As an indie filmmaker who has gotten into self-distribution, and even made a movie based on a podcast, Smith also complimented Schnapp on his documentary. Schnapp used Kickstarter for the budget and is releasing the film himself on VOD. “You’re my dream kid, man,” Smith said. “You wanted to make a flick. You had a vision, man, and you went out and you built it. Then I’m sitting here listening to you go, ‘Yeah, I’m going to grass roots it myself because I’ve done it this far.’ You’re my dream. Well done.”

The Death of Superman Lives: What Happened? comes out July 9. Find more screenings on their Facebook page: https://www.facebook.com/TheDeathOfSupermanLivesWhatHappened