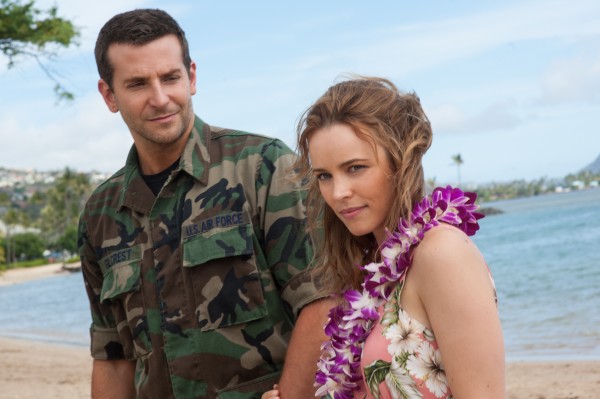 I’ve been concerned that Cameron Crowe hasn’t really had anything to write about since Almost Famous. Once he told his autobiographical story, he was out of experiences to dramatize. His follow-up was a remake Vanilla Sky, a worthwhile creative endeavor but not necessarily personal. He’s a writer/director though, and both Elizabethtown and We Bought a Zoo felt like a storyteller struggling to find a story.

Aloha is more watchable than his last two movies. This time, he actually did find something to say and I admire using the vehicle of a Cameron Crowe rom-com to say something about geopolitics. That vehicle remains a narrative mess.

The TV spots have actually given away the end of the movie. Don’t worry, the ads have taken it so far out of context that you’ll still be surprised, but it makes sense. Those were the only scenes that create the illusion of a plot. Brian Gilcrest (Bradley Cooper) is a disgraced officer now working for private contractors. He’s on Hawaii to perform a ceremony that seems perfunctory. His ex-girlfriend Tracy (Rachel McAdams) lives on the island with her new family, and Brian is paired with Allison Ng (Emma Stone) who’s clearly going to be the one for him because he hates her at first.

There’s nothing wrong with doing a fluffy rom-com, but you ought to know that’s what you’re making. Aloha is so desperate to create full backstoried lives for all of its supporting characters, it creates subplots that go nowhere and convolute a simple story. Tracy is really just the love triangle element, but Aloha wants her to have a whole family story that it has no room for. Fingers (Danny McBride) has a physical affectation to compensate for the fact that he’s the supporting character there for Brian and Allison to tell their plans. The character are essentially gimmicks, especially Allison’s peppy Type A personality. The film coasts on the stars’ winning personalities, but it is just coasting.

No matter how much mediation on the island and nature you throw in there, it’s still the cookie cutter formula. Characters, Allison especially, relate myth after myth about the island, but that’s not a narrative. Characters tell Brian what his problem is instead of letting us see it. I liked how the story unfolded what Brian’s actual mission was and what he would need to do to find redemption, until it turned out there were no consequences for him whatsoever.

Yet Aloha is light and affable, so you might enjoy hanging out with the stars on a pretty island. You’ll know something is missing, but it might not be until later that you get angry about all the wasted opportunities. There is a subtitle gag that should be a movie classic, except nobody will remember it from this movie. There’s a scene where Tracy is recapping to Brian their failed relationship and he has a good reaction to this cliche, but it’s still exposition.

You can’t blame it on the laid back spirit of the island, because it’s already Cameron Crowe’s aesthetic to let his stories breathe. When they’re filled with brilliant diversions, or layers that add to the whole, it’s really special, but you can’t fake it. This isn’t the island’s fault. If anything, Aloha is too busy to really settle into the flow of the island. Funny, when I interviewed Crowe for Elizabethtown I asked him if he’d ever be interested in doing an action movie, because I kind of wanted to see what a Cameron Crowe action movie would be. I guess this is what it looks like, and it’s my fault.