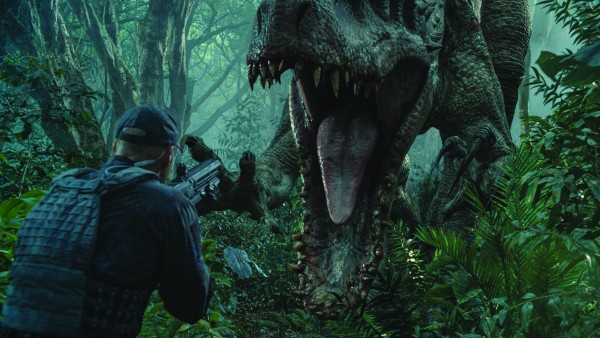 I love Jurassic World as both an allegory and a sequel. They have finally opened the dinosaur theme park John Hammond always envisioned, and why wouldn’t they continue cloning dinosaurs? Colossal failure has never stopped any corporation from proceeding. Now they get corporate sponsorship, and a competitive mandate that requires them to make bigger, scarier dinosaurs. The allegory is corporations encouraging our worst instincts to consume more and more. The sequel is that, duh, we’ve already seen three movies worth of dinosaurs, and even the third started stretching with the Spinosaurus. 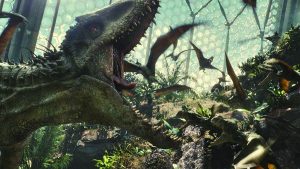 The original Jurassic Park was Steven Spielberg doing Jaws with dinosaurs. Jurassic World is even more Jaws than Jurassic Park was. Jurassic World is pretty well contained and safe. There’s just the one big bad monster dinosaur running around, like that pesky great white on the beach. Only now it’s Jaws meets Aliens because the military has an agenda too. Again, allegory and sequel. Why wouldn’t the military try to appropriate something that’s already of questionable safety? Look what they’ve done with drones.

The Spielberg spirit is alive and well in a film totally worthy of the Amblin logo at the top. The macro Spielberg of course is a broken family. Zack (Nick Robinson) and Gray (Tye Simpkins) are visiting their aunt Claire (Bryce Dallas Howard) at Jurassic World, who ignores them and leaves them and sticks them with a chaperone. The micro Spielberg is that mix of wonder and danger.

You can’t show us dinosaurs for the first time again, but director Colin Trevorrow creates wonder in seeing the fully functioning dinosaur park with thousands of tourists roaming the streets and food courts. Where Spielberg opened with awe and built towards dread, Trevorrow does a good job interspersing the two tones throughout. There’s excitement right away, but even when all hell is breaking lose there’s still, as Jeff Goldblum put it, “Ooh”s and “ahh”s. 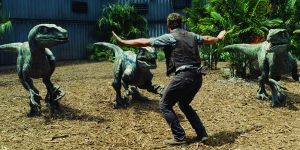 The body count is high, probably higher than The Lost World, and that’s a good thing. Those Amblin movies had edge. Jurassic World has a great sense of humor too, that macabre humor that comes out in a crisis. Not just Chris Pratt as raptor trainer Owen Grady. The kids get some big laughs too.

Callbacks to the original range from clever repurposing of our favorite things, to sometimes we’re just seeing old stuff from the first movie. Sometimes the CGI gets a little too busy, with raptors flopping around more than a real dinosaur probably would. The big thrills are when Trevorrow hides the big dinosaurs and builds up the chase.

Jurassic World total summer fun. With the perfect blend of magic and mayhem, this is what summer movies should be.