Ashley Tisdale stars on the new TBS comedy Clipped as a Boston hairdresser working in Buzzy’s barber shop. I got to visit the set of Clipped at Warner Brothers studios and join a roundtable interview with Tisdale. It was such a chill group, I was able to ask a lot of questions submitted by fans of Ashley on Twitter, so here are the questions I asked Tisdale during the Clipped roundtable. Clipped premieres June 16 on TBS and airs Tuesdays at 10 PM. 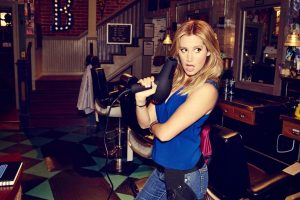 Nerd Report: Is there a chance to show any flashback of what your characters were like in high school?

Ashley Tisdale: Yeah, actually we shot an episode last night where there is a flashback scene. So that was a lot of fun. We got to play our 15-year-old selves which was interesting and crazy, but it was a good time.

Nerd Report: Are there braces?

Ashley Tisdale: Yeah, they put braces. It’s a flashback between me and Mike [Castle] who plays A.J. We asked for the whole thing. We were like, “Whatever you guys want to do.” Pretty much I just wore no makeup. I look really young I guess, but I wore no makeup. They had these braces fitted for us. I was rocking a side pony with butterfly clips that I used to wear. I was really impressed that Cynthia the hair chick had all of those butterfly clips because it took me back to eighth grade, so it was really funny.

Nerd Report: What is Danni and A.J.’s relationship? 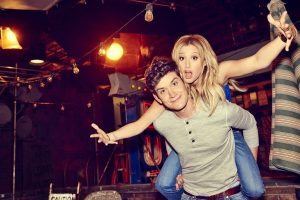 Ashley Tisdale: I think Danni has, from the moment they got together in high school, she’s like this is the guy for her. But I feel like she knows that he’s not ready and he’s just, I think, has kind of this thing about him that he’s still reaching for something and that he’s not settled in his life yet. So he’s like her best friend but she obviously is still so in love with him. It’s kind of this on and off. They do get together but then I think she wants something more eventually, but she’s hanging on for it.

Nerd Report: If you could have any dream celebrity cameo on Clipped, who would you like to have?

Ashley Tisdale: Oh, that’s a good one. Max [Mutchnick] always gets mad at me because I throw out names like Tom Brady. He thinks I’m crazy, which I am. Probably someone like, I would like to get one of my costars from High School Musical on the show. I’d love to do something like that. That could be cool. I think that any of them would be down. It’s their schedules that are so insane. We almost tried to get Zac but he’s literally back to back with movies and not in town. And then Vanessa’s not in town but hopefully if we get a second season, we’ll be able to do more cameos like that.

Nerd Report: Have you heard anything about a 10th anniversary celebration for High School Musical?

Ashley Tisdale: I haven’t, I haven’t. That’s so crazy. Is it 10 year next year? That’s interesting. I don’t know about in the works for you guys, but maybe we should get together. 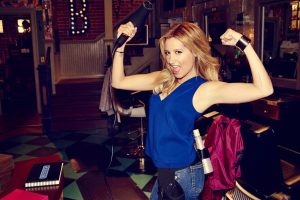 Nerd Report: Do you have any plans for a new album?

Ashley Tisdale: You know, I don’t have any plans for an album right now. It’s funny because everybody always asks me about music. For me, I love music. I love singing and I actually get to sing on an episode of Clipped which is really cool, but I don’t have that “I need to do that right now.” I have so much going on, obviously with this show, I have a movie Drive, She Said coming out. I also want to do more movies in between stuff and I have a lifestyle website coming out called The Hot Mess. I also have my production company so there’s a lot of stuff going on. Until I’m ready to be like, “I want to do music,” I’m just not going to, but I never want to say never. I also have a husband who’s a musician so I sing whenever I wanna really sing.

Nerd Report: What have been your favorite moments from the set of Clipped? 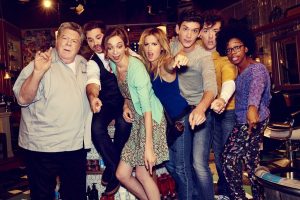 The cast of Clipped

Ashley Tisdale: There are so many moments. It’s been so amazing. It’s one of those projects that is really special and it’s just different from a lot of stuff I’ve experienced. I think it’s just mainly because Max and David [Kohan] know what they want. They know how they want the episodes and the characters. I think in the past I’ve felt like I’ve been given direction, but pretty much people have just been like, “That’s great.” This is like I’m super challenged weekly on just pushing myself as an actress which is really rewarding at the end of the day because I get to look back and be like oh my God, I definitely feel like I sit back into it better. That’s really rewarding for me so I think that it’s like those moments, the moments that have the cast, Matt Cook and Ryan [Pinkston], they’re constantly scaring the sh*t out of me in the dressing room. It’s just a bunch of people having so much fun at work and hanging out, and just getting inspired all the time. It’s been so much fun.