I was able to get some hands-on time with the game Rocket League and it was such a great experience to play and was a real high adrenaline game where you must calculate where you strike on the ball will help you or give your opponent a chance to score a point. A very well designed and simple game that allows you to customize and personalize your car with over 1 billion combinations within the game. 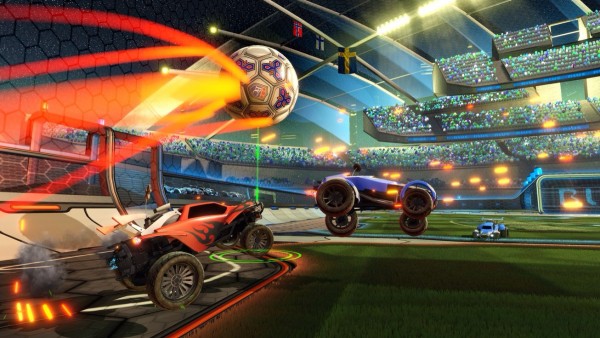 Rocket League is a futuristic action-sports game where players pilot rocket-powered vehicles in an enhanced version of soccer by driving their vehicles into the ball and other players in a variety of arenas. Rocket League uses an advanced physics system to simulate realistic interactions between cars and the ball, where mass and momentum determine how hard balls and cars hit each other, creating a unique and visceral playing experience

Fully Upgraded Online, Local and Splitscreen Multiplayer Modes:
Fans of the original will love the returning options for two- to four-player competition, from on-the-couch split-screen competition to the robust online play.

Team-focused Gameplay:
Rocket League’s team-oriented play compels gamers to learn short- and long-term tactics and strategies to stay in the game, challenge their friends, and stay atop the monthly leaderboards.

Content Overload:
Rocket League builds upon its predecessor with a healthy array of completely new unlockable vehicles, arenas, more than 100 customization items, and other surprises.

Broadcast-Quality Replays:
Gamers can play with, stylize, and create the ultimate replay of entire games with the new replay system. Fast forward, rewind, or view the action from anywhere in the arena!