Last week at E3 2015 in L.A., I got to get my hands on some awesome and interesting games. While in the Bandai Namco game room, where there were all kinds of games at my disposal, I picked up the controller to a game called Attractio. Here’s my recap of the hands on demo. 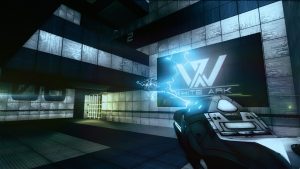 First let me explain what Attractio is with the help from the game developers themselves:

Attractio is the new mind-bending single-player game from indie developer GameCoder Studios. This fresh and innovative game will change your perception of physics and reality.

In the year 3275, humankind inhabits a big part of the Solar System and looks forward to the new season of the famous reality show: Attractio. This program broadcasts live from the Entertainment Space Station (ESS)—an artificial satellite orbiting Mars—created specifically for Attractio. It is the only place that meets the requirements to host experiments with gravity manipulation. Deadly challenges and puzzles await those willing to change their lives on live television to win a better life.

Choose from three participating contestants—Keir, Dalek, or Mia—each with unique abilities and storylines. Some puzzles can be solved alone while others require teamwork, where you’ll need to combine two characters’ abilities and switch between the contestants. To survive, you’ll need to use different gadgets to manipulate gravity and play as a team in this exciting reality show.

In Attractio, each object has its own gravitational direction you can change and manipulate. Interactions between objects, combined with different gravity directions, create a range of possibilities. Solve deadly physics-based puzzles using never-before-seen gadgets with gravity-manipulation capacity, all the while creating unexpected mechanics. Each puzzle across the game can be solved in many different ways!

Now that that’s out of the way, Attractio (published by Bandai Namco) reminded me a lot of the popular video game Portal and I was told by Alfonso Cabrera Ibarra, Chief Commercial Officer at GameCoder Team who is one of the creators of this game, that a lot of people also told him that it was similar to Portal. The game is a first-person puzzle strategy game. As I made my way through different areas of the stage, I quickly learned that I really needed to put my brain to work when it came to things like opening doors and jumping from one area to the next. I had to use different boxes, which all had their different gravitational directions, and put them onto a platform which would then open the door. The controls were pretty easy to get used to which makes it easier to focus on the tasks.

To be honest, I’m not one for puzzle strategy games but what had me interested in this game was the story and the fact that you get switch between three different characters, who all have different abilities and weapons. Alfonso explained to me that each character has their own story and secrets. Reasons why they are in this reality game. Knowing that, I think people will want to keep playing Attractio to find out all the secrets of these characters.

The graphics were pretty good and you can tell that the creative team spent a lot of time on this game based on all the details in every object you see on the screen. Take a look at some of the key art and screen shots from Attractio, below: 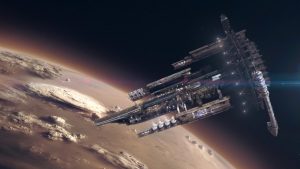 Attractio will be released some time in September-October for PS4 (Digital), PS Vita (Digital), STEAM (Win/Linux/Mac).