I met Boaz Yakin at a screening of his previous movie as director, Safe. We kept in touch through his work on Now You See Me and appearance on a Sundance panel, so when his new movie Max was coming out, we reconnected for an interview.

Max tells the story of a Marine dog who can no longer serve after his commander (Robbie Amell) is killed in action. The Marine’s family adopts Max and the dog forms a friendship with the Marine’s younger brother Justin (Josh Wiggins). Max opens in theaters June 26.

Nerd Report: Was Max what you developed immediately after Safe?

Boaz Yakin: I actually wrote a number of other scripts as well, on the more independent film type of front, but this is the first more studio oriented film that I wrote. Sheldon and I wrote it together. 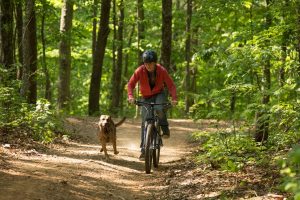 Nerd Report: One thing I like about it is that it becomes a full on action/adventure by the end. Was that part of your and Sheldon’s concept?

Boaz Yakin: In fact, in some strange way it’s the other way around. When I first thought of doing the movie, I just threw at Sheldon the idea that no one had done a dog movie in a really long time, where the dog was treated as a protagonist, a heroic protagonist but not in a kind of cute Disney environment. I was thinking about the dogs that had been used in the original Hills Have Eyes are some of the most exciting sequences in that movie. I just thought about making a dog adventure movie. Sheldon, who is a Marine and a Vietnam vet, was the one who suggested making it about a military dog, about a MWD, and it sort of ended up evolving from there and actually becoming much more of a family drama and a story about the American family experience in constant wartime than it had ever started out. It started more as an adventure film and it ended up becoming much more of a drama rather than the other way around. For me, as a storyteller, part of the challenge was and a lot of the model that I used was actually Jaws, which is probably still my favorite Spielberg film. He did this really interesting thing in that movie where the first half of the movie is essentially a horror movie, a slasher movie with a shark. The second half of the movie is a high seas adventure. The tones are really disparate but because of the way the film is constructed and designed, they flow into each other really smoothly so you kind of get two great movies in one. You get a great horror movie and then a great adventure and you’re happy to have had them both. For me, that was similar to Max where for half the movie you’re hopefully getting a satisfying, interesting or at least emotionally compelling family drama. In the second half of the movie it segues into a Tom Sawyer-like boys’ adventure story. Trying to make those two tones work and make those two halves feel as seamless as possible was my challenge.

Nerd Report: Since the title is Max and Warner Brothers just released a Mad Max film, I wouldn’t put it past a studio to change the title. Did you have to assure anybody there wouldn’t be confusion?

Boaz Yakin: I’m worried about confusion. It was meant to come out well before Mad Max. It just sort of worked out that way that both movies ended up getting a summer release and that came first. Obviously, it’s got a way bigger advertising budget and profile so yeah, am I concerned that people at the mall are going to see Max and say, “Oh, I guess that movie’s still kicking around?” Yes, I am but there’s not much we can do about it at this point and everyone’s just making an effort to make people aware of this movie and get a chance to see it. I think it’s risky to have put this movie out, like a small tree in the middle of all these big trees that are coming out around it. We’re in a very crowded summer with huge movies with huge advertising budgets. Hopefully we’ll get noticed and find our niche in that particular environment.

Nerd Report: Did they ever suggest alternate titles?

Boaz Yakin: Not for a long time, not for that reason certainly.

Nerd Report: As far as dog behavior goes, were most of the things in the script easy for the trainers to achieve?

Boaz Yakin: The trainers are really amazing at what they do. The company is called Birds and Animals and it’s run by a guy called Mark Forbes and his team. That’s who I interfaced with when I made the film. It was very challenging because the dog was such an integrated part of the movie and was in so much of the movie, doing so many things. A lot of it was that the dog had to be really expressive and do a lot but not be anthropomorphic or cute. They had a lot to do, a lot on their plate so actually it was very challenging. It was challenging for me too because you have to have a pretty quick learning curve in terms of understanding where you can put the camera and how you can film an animal based on what the relationship with the trainer is and where they have to be at all times. So I worked very closely with the trainers even in terms of how we were shooting things or what to expect.

Nerd Report: I was especially impressed that the dog still performed when he was wet. Dogs don’t like to get wet.

Boaz Yakin: Not especially. They’re very cranky about it.

Nerd Report: Did the trainers have a secret to getting the dogs to let themselves get wet and still perform?

Boaz Yakin: They’re very well trained dogs. Part of what makes the Belgian Malinois such an ideal type of dog for the military is that they’re so task driven and reward driven. So they’re very trainable. They’re not good pets. They’re really high maintanance and high energy and I hope people don’t watch the movie and think, “Well, I have to get a Belgian Malinois. They’re so cute.” They’re going to have surprise on their hands, but they’re very well trained. 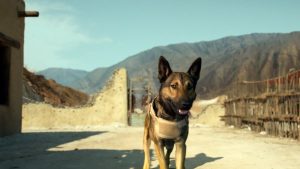 Max on the job

Nerd Report: You shot sequences of Afghanistan for probably not the budget American Sniper had. How did you pull of convincing scenes of the war?

Boaz Yakin: It’s a combination of real location, the location we found in North Carolina deep in a defunct rock quarry. By the way, I’ve been in the Middle East and it’s never been as hot as it was in North Carolina in the summer in that rock quarry. It was outrageous. It was 110 degrees in the shade and humid which makes everything worse. That being said, the sets were built into that rock quarry in North Carolina but then there were digital extensions of mountains and hills. So it was a combination of an actual location and some careful digital work, because we didn’t have a big digital budget either.

Nerd Report: Dealing with the military, was it important to show hints of corruption so it’s not pure rah rah hero stuff?

Boaz Yakin: It was important for me that it not be at all rah rah hero stuff. When you’re making a family movie and you’re making an American movie, you’re attack needs to be gentle if you want the chance of getting something made and scene. Maybe that was another challenge was making a film that was respectful of the individual experience but not jingoistic and also really questioning the effect of the myth of American power and its effect on the American male. [Laughs] In a gentle and not too obvious way. I think it’s possible to look at the movie and say it’s some kind of patriotic thing, but I think when you really look at the effects of that environment on all the characters, especially the male characters, you see that it’s actually a movie about how everyone is suffering from those expectations.

Nerd Report: The cinematography was really interesting too, like shooting under the dog’s nose or shooting a scene through a fan. What was your concept for that cinematography?

Boaz Yakin: Other than just trying to keep it interesting, I always approach the cinematography as a way to enhance the storytelling and give you a point of view on the scene and create a specific energy. Obviously in a movie like this, I studied the master of these types of movies, Mr. Spielberg, quite a bit and definitely tried to draw inspiration from that style of moviemaking and that style of storytelling.

Nerd Report: There’s definitely some Boaz Yakin in it though. Was the shot of the car’s side mirror a reference to yourself in Safe?

Boaz Yakin: [Laughs] Well, when there’s a mirror you’ve got to use it. I’m always looking for an opportunity to shoot a reflection.

Nerd Report: Do you have your next film lined up?

Boaz Yakin: I know what I’d like to do. There’s a couple of things I’d like to do but they’re not remotely lined up. As always, they tend to be more independent films, and then I struggle and see if they can get made. Then eventually I have to make a decision and see what happens.