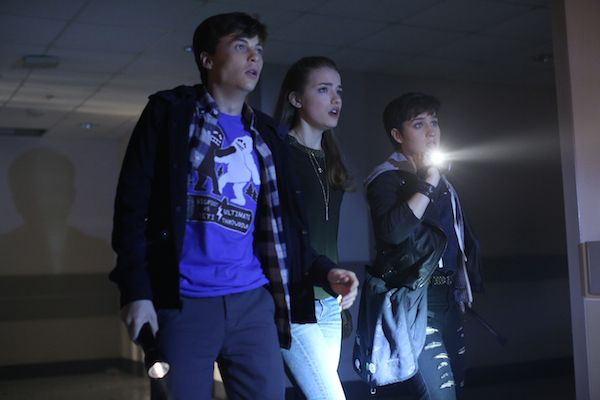 Television is about to be very good for Franchise Fred, as new series based on hit movies are coming this fall. You don’t even have to wait to see movies continue on the small screen. Tonight, MTV premieres their adaptation of Scream. While the Scream TV show does not feature any characters or storylines from the movies (they even designed a new Ghostface mask), it is still distinctly a Scream story.

When the pilot for Scream premiered at the Los Angeles Film Festival, I spoke with Jill E. Blotevogel, one of the showrunners. She and Jamie Paglia have a show that riffs on the tropes of horror TV shows in a meta way, and also creates a new mythology for Scream. Scream airs Tuesdays at 10PM on MTV.

Jill E. Blotevogel: Actually, when I was talking about doing that Noah reference about horror on TV, I wanted to reference the Stab movies saying, “Oh, come on, even the Stab movies couldn’t get it right” just to make it an in joke. Bob [Weinstein] was like, “I want this to live on its own.” That was going to be a very subtle nod to the original ones and he said, “No, this one’s gotta live and breathe as its own entity. We do try and write in some little winks and nods to the audience.

Franchise Fred: I love the idea that Stab had a failed TV series.

Jill E. Blotevogel: That would be hilarious. That’s a great idea.

Franchise Fred: How did you approach creating the Brandon James mythology that’s original to the show?

Jill E. Blotevogel: For me, the way to give this series longevity was to find a deeper mystery. It’s such a classic horror trope, the killer from the past who nobody’s quite sure, is that killer dead or alive? So creating someone like that was a way to give this masked killer real context. It was also for me a way to tie the main character’s mom into the story in a more organic way. Like Tracy said, the mom character’s almost always just the one who’s there to pat her daughter after her friend’s been killed. So I wanted to make her an organic part of the story. I always said she was the Sydney Prescott of her generation. So the story is coming full circle now.

Franchise Fred: I think you found the Drew Barrymore of television. Did she audition for the role of Emma first?

Jill E. Blotevogel: Very early on, she was someone that we were talking to because she had done this movie with the Weinsteins and they had such a great relationship. I just thought, “She’s such a lovely actress and actually so age appropriate to the part.” She was 16 when we filmed the pilot but she had so many things going on, and we weren’t sure when we would be producing it and we couldn’t guarantee that it was going to be in Los Angeles, so we moved on pretty quickly but we always said we want [SPOILER] to be a part of this somehow.

Franchise Fred: Should we not say who is in the opening scene?

Jill E. Blotevogel: No, it’s out there. It was in Entertainment Weekly and she’s in all the trailers. Very early on, we were like, “Is there any way we can keep this on the down low?” It was like, probably not.

Franchise Fred: We know when we see her first that she’s going to be the Drew Barrymore, but that’s a similar story to how Drew got the part. She auditioned for Sydney but suggested she play Casey because it would be a big surprise.

Jill E. Blotevogel: Right, I do remember that now that you say that.

Franchise Fred: You say there won’t be a kill each week. Are you nervous to see how that first episode with no murder in it will play?

Jill E. Blotevogel: I’m not because I actually worked on a show that did promise a kill every week, Harper’s Island. It actually became something that made the show a little less fun because it just became people going okay, how is someone going to die? Now, with these characters, we have the time to get to know them, to fall in love with them and I want people to watch these episodes where someone doesn’t die and just go away relieved for another week because they’re falling in love with this character and this character. Like Noah says, “When it happens, it’ll break your heart.” We hope.

Franchise Fred: Is that where the meta analysis of Scream applies to television, since the rules of television are different?

Jill E. Blotevogel: Yeah, the same way that Scream paid homage to horror movies, we’re trying to pay homage to horror on TV because it is such a healthy genre right now. There’s so much great horror on TV. Every week, we’re going to try to find a way. I kind of coined a phrase for what Noah does. I call it meta-logging. As we go along, he’ll be doing a lot of very fun commentary on the world today and horror’s place in it. If he recognizes something that’s happening to them, he’ll be like, “This is totally like on PLL when there’s a lair, you find this thing and A is doing this thing.” It’s just so fun to be able to reference the pop culture of our time. I don’t know if it’ll play in 100 years but for now it’s a lot of fun.

Franchise Fred: Is there a little less time for Noah to do that every week than there was for Randy in the movies? Do you have to be a little more strategic about that?

Jill E. Blotevogel: Oh no, we still have time to fill.

Franchise Fred: Have the rules for how social media works in movies and television changed recently?

Jill E. Blotevogel: I mean, we’re trying to show that teenagers don’t even understand how vulnerable they make themselves. They put everything out on Facebook, Instagram or every website. They just put themselves out there without realizing that they might be endangering themselves. A killer used to have to stalk someone. Now that person checks in at the Froyo at the mall. You just go wait in the dark parking lot outside the Froyo store and you got someone.

Franchise Fred: I know you look back on Wes Craven for directing the movies. Do you look at Kevin Williamson too for his sceenplays?

Jill E. Blotevogel: Oh, absolutely. He is another full fledged godfather of this series for sure. His mind is where it all sprang from. He created something fabulous. To be able to take that and write a new chapter in it has just been an honor and a thrill.

Franchise Fred: Is there some sort of cold open every week even if it’s not a Drew Barrymore scene?