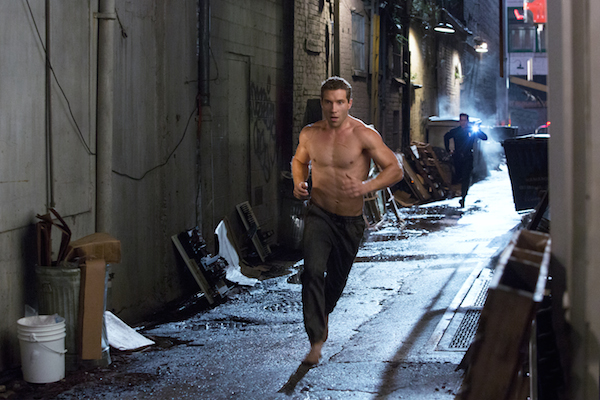 As Franchise Fred interviews go, this is actually my third with Jai Courtney. I first met him on A Good Day to Die Hard for CraveOnline, but got to interview him for Nuke the Fridge for Felony. That’s where I introduced him to Franchise Fred, and also my friend Courtney’s plan to become Mrs. Courtney Courtney for comedic purposes.

Courtney plays Kyle Reese in Terminator: Genisys, the classic role of Sarah Connor’s protector from the future and father of John Connor. Only this time, when Reese arrives in 1984, Sarah has already been living with a Guardian Terminator she calls Pops, and has been waiting for Reese to arrive in the new timeline. Terminator: Genisys is now playing.

Jai Courtney: Indeed I do.

Franchise Fred: Do you also remember when I proposed to you for my friend Courtney, who wanted to be Mrs. Courtney Courtney?

Franchise Fred: She was the one sitting next to me who asked you about doing stunts naked, so now you’ve met.

Franchise Fred: So how did it feel to do those classic scenes with the homeless man and in the department store as Kyle Reese?

Jai Courtney: It was awesome and it’s really fun trying to recreate certain sequences shot for shot. It was great when I watched the film back to see them come together. It’s kind of strange how easily I was transported. It was almost like you were watching the original movie again which was kind of cool It was fun. I think it was nice to have a few of those in without having the whole film laden with references.

Franchise Fred: And to see them from a different perspective lets you relive it all over again.

Franchise Fred: Were you studying those particular scenes from the original film?

Jai Courtney: Not too closely. I’m familiar with the early movies but just generally. I went back and watched those more for tonal reference and that sort of thing. Pretty quickly you find yourself in a place where it’s more constructive to focus on the script that we were dealing with and handle it by putting your own spin on it.

Franchise Fred: In the time travel scene, you’re actually hanging in mid air. Was that some difficult harness work?

Jai Courtney: Yeah, it was a balance of I suppose a bit of smoke and mirrors. We did some harness stuff. There was an interesting rig when Emilia and I had to do one together and we were kind of levitating. That was quite funny. We were both sitting in a joint little swing saddle thing. It was quite amusing.

Franchise Fred: So you shared a harness?

Jai Courtney: We both had a harness but it was kind of rigged so we were joined together. Couple that with the fact that you’re wearing next to nothing. It was not a flattering moment.

Franchise Fred: How about the scene with Arnold where you’re racing to load ammo into the guns?

Jai Courtney: Yeah, that was fun. It was cool. I remember the day we approached the idea and I thought, “Oh, f***, I wish I’d practiced at home so we can get some real legit speed up.” I’m sure there’s guys that’ll watch this movie and think we’re not going that fast at all, but I think that’s a nice little beat. It’s an interesting turning point for the character there and his accepting of the role that Pops has. It’s a nice moment because it sort of marries the antagonism that they have for one another but then there seems to be a bit of mutual respect as well.

Franchise Fred: Did they play The Ramones for you on set?

Jai Courtney: They did not. [Laughs]

Franchise Fred: This is the first entry in the series where Kyle Reese has had to relate to a Terminator as an ally. Was that interesting new territory for you?

Jai Courtney: Yeah, I think it is. It was a continual exploration of his attitude towards that. He was orphaned at the hands of one of the machines so he has such lack of understanding for Sarah’s dependence on Pops. You always want characters to be able to travel somewhere emotionally. I don’t know that he’ll ever really see one of them as human or as family, but it’s cool to explore that.

Franchise Fred: Is also playing a love story with Sarah, where she’s resisting that destiny, an unprecedented dynamic for a love story? Was it interesting for you and Emilia to figure out?

Jai Courtney: Yeah, it was great. It’s cool to come at it from a strange angle where, whether she likes it or not, it’s going to happen. I think it’s that journey of accepting that and then perhaps somewhat becoming or starting to feel organic at the end anyway.

Franchise Fred: There is a point where Kyle very appropriately freaks out. How did you figure out the appropriate reaction to all this news would be?

Jai Courtney: I don’t know. Trying to, I guess, just relate to it in a way that you can understand and identify with. It’s easy with these kinds of films where they’re kind of heightened realism or actually stretch everything out to that level, but I think the key is to anchor it in a space that’s not that far from reality. Whilst it’s weird as hell for us to imagine that someone traveling back is his son and all this, there’s got to be real emotional stuff behind that. I think the key is trying to put yourself in that position, or as close to it as you can and imagining what receiving that news might be like.

Franchise Fred: Is it sort of speaking for the audience too?

Jai Courtney: I guess so in a way.

Franchise Fred: Is Kyle more the audience surrogate in Genisys, where Sarah was in the first movie?

Jai Courtney: Yeah, I definitely think that’s the case. Especially him trying to catch up, being brought up to speed across the whole thing. It’s like he’s the fish out of water. He’s the one that doesn’t really know what’s going on so he kind of asks the questions for us.

Franchise Fred: What were the scenes they had you audition with?

Jai Courtney: That is a good question. That was a long time ago. Uh, there was the scene where they’re arguing about the time travel that Guardian has built and debating which time to go back to. Kyle’s kind of having this realization of what he saw while he was traveling and piece that together, figure out what that meant. Then he has that motif that comes back to him, the stroking of the hand and remembering that somehow, that different timeline. That was one of them. The scene really moves and we see a bit of that relationship where they’re butting heads and then pared back to a point of vulnerability where he’s saying, “I can’t explain it. I don’t know what it is but you have to trust the fact that I know that it’s real and I know that it happens. We need to listen to that.”

Franchise Fred: Did the audition get close with other actors?

Jai Courtney: Yeah, I’m sure. There was a bunch of us that were all testing at the same level. Um, I certainly wasn’t a front runner. I’m not sure who or how many but Emilia tested with a bunch of us guys.

Franchise Fred: Basic question, but when did you first see The Terminator and Terminator 2.

Jai Courtney: One wouldn’t have been until I was a teenager. I think I caught up with that later on, but Terminator 2 was really the one that I remember really well. My sister and I drilled that a lot as a kid. I can still remember how that film made me feel. I was identifying or trying to identify, idolize really the young John Connor. This rebel kid and then I just remember Robert Patrick’s T-1000 being so beautifully scary. There’s sequences from that movie I can see running through my head.

Franchise Fred: This obviously isn’t relevant to this story or this timeline, but as a superfan I know that on the TV show, Kyle had a brother, Derek Reese. Were you aware of that?

Jai Courtney: No, I didn’t even know that.

Franchise Fred: If you ever need that research for the next movie, that’s there.

Jai Courtney: Sure, maybe we’ll touch on that.

Franchise Fred: Since Kyle may have a new fate in this movie, are you on board to continue this new timeline?

Jai Courtney: Certainly, yeah. If there’s interest in creating that, then I’ll be there for sure.

Franchise Fred: You’ve joined a number of franchises that I already liked, but is it different doing Suicide Squad as part one of a franchise?

Jai Courtney: I guess my experience, there’s been two examples where I’ve jumped in late but it’s fun to be part of something that is unprecedented. I guess that frees you up and gives you the ability to not have to think about anything before it. If you just create something new and there aren’t any rules to stick to or break.

Franchise Fred: Is Captain Boomerang also your first character who has a definitive uniform?

Jai Courtney: Sort of. Look, the different incarnations over the years meant that we had freedom with the design. Some characters are a little more stringent but his stuff’s changed so we were able to create something that fits with the world and it’s really cool, man.

Franchise Fred: Is Suicide Squad just a David Ayer movie as much as it is a superhero movie?

Jai Courtney: Definitely and that’s what really attracted me to the project was the fact that he was at the helm. I’m sure he’s going to kill it.

Franchise Fred: I got to see Be Here Now at the Los Angeles Film Festival. There’s a scene where you both audition for a film together. Neither of you got that part, did you?

Franchise Fred: What were your recollections of them shooting that?

Jai Courtney: Look, man, he’s a very, very special friend of mine and I’m just happy to see that that film finally got to see the light of day and people can experience it now. I’m thrilled that it picked up the audience award at the LA Film Festival. It’s wonderful.