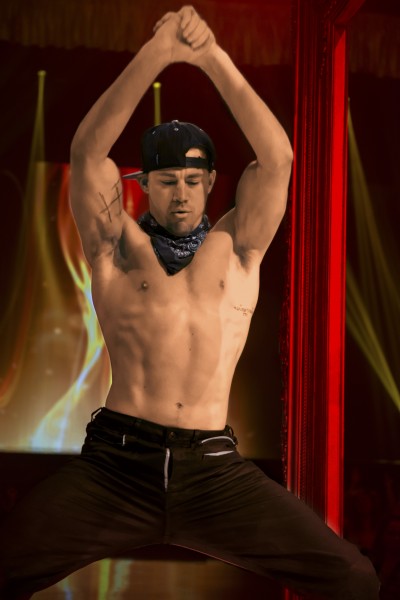 I was one of the few critics who did not like the first Magic Mike. I thought the plot it felt the need to have was boringly obvious. So the unreliable f*** up Mike tried to help ended up screwing him over? You don’t say! Definitely not enough dancing, like it was embarrassed to be the male stripper movie. But you know me, the fact that they made a sequel is automatically more interesting to me.

I love the way they reintroduce the returning characters and explain why Matthew McConaughey isn’t in this one. There’s one way to write out a character, and they have fun with that. Everyone else, honestly I didn’t remember who they were from the first movie. I knew they were in it, but they were all satellites orbiting Channing Tatum. In Magic Mike XXL they all get superficial traits, but dammit they own those superficial traits.

Magic Mike XXL is closer to the gratuitous man candy movie the first Magic Mike should have been, but it’s still not quite there. In between dance scenes, there is talking, and this talking goes on way too long. The boys are on the road and road movies always have pit stop encounters, but these pit stops are supposed to be memorable incidents. In XXL, they stop at a house and have full biographical conversations with the housemarms and their daughters. These conversations are not as interesting as they think they are. Plus, everyone is mumbling, whispering or drawling.

When they dance, the dances are relatively good. Every character’s individual routine is diverse at least. They’re just a tad limited by the format. Since they’re strippers, they’re supposed to seduce, and they have to shoehorn in some grinding and thrusting. They can’t go all out Step Up with beefcake.

There’s a real missed opportunity in the plot of Magic Mike XXL. They are driving to a stripper convention and there is not one rival gang of evil strippers trying to sabotage them along the way. They perform at the end, but who have they triumphed against? Don’t say themselves. They haven’t come that far either.

Respecting the male stripper movie doesn’t mean you have to be pretentious. Here is what the plot of a Magic Mike movie should be: “The bank is going to foreclose on the club unless we raise $50,000 by Monday. How are we going to come up with that cash so fast? Strip off!” And you do the best “we have to raise $50,000 dollars by holding a strip off” movie the world has ever seen.

That’s not Magic Mike XXL but it’s getting there. Having less plot helps, but they still need to cut all that dialogue. This needs to become like the Fast and the Furious franchise of male strippers. Each new sequel introduces a new character. Get a Hemsworth in there or some Nickelodeon heartthrob trying to grow out of teen roles, like when Nick Jonas buffed up to do Kingdom. Of course, the golden geese will be Ryan Reynolds and Ryan Gosling. They would be The Rock and Jason Statham to Magic Mike.