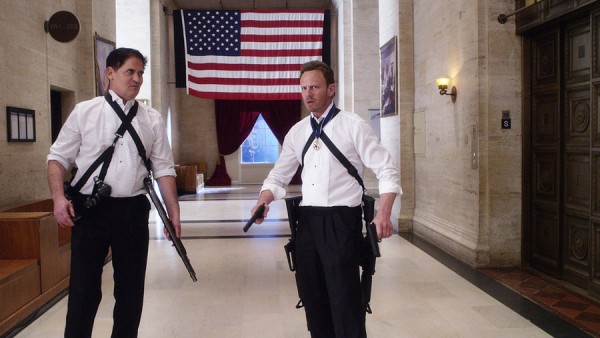 I knew when I started talking to Anthony C. Ferrante about Sharknado 3: Oh Hell No we would get into some spoilers. I was lucky enough to get to see the movie a week early, but I wasn’t going to ruin the fun of discovering all these crazy jokes and action for viewers. So if you’ve had a chance to watch Sharknado 3 on Syfy, you might want to know the answers to these questions. If you haven’t seen Sharknado 3 yet, you can still stick with our first interview. But go watch a rerun on Syfy or it must be available On Demand now.

Franchise Fred: So speaking about new territory in Sharknado 3, you wanted to save the reveal of the space finale so it’s a surprise for everyone who sees it.

Anthony C. Ferrante: If you want to refer to the big stuff at the end, there’s something that we’ve never done. There’s four ideas that are crammed into this one movie and we get to do this big epic sci-fi thing at the end that instead of it just being a footnote, instead of it being like Jason Takes Manhattan where the last five minutes are Jason in New York and you’re like that’s kind of a copout. Most of this is set on a boat. We’re not even telling people what we’re doing at the end of the movie but we give them a meal. We give them a 30 minute movie at the end that’s unlike anything that we’ve done before. Especially on our short shooting schedule, the fact that we accomplished so much of that is unheard of.

The Kennedy Space Center, I pulled that off at the 11th hour. We reached out to them in post-production and said, “Look, we need this to make the movie look epic.” They said, “If you can do it with a crew of seven, you can do it.” So with our crew of seven, we went there and had Ian walking around in the suit in the Vehicle Assembly Building and getting suited up. We got Mission Control. The only reason I’m in the movie is because we had seven people. Someone needed to be the head of NASA.

Franchise Fred: Was the idea of a Twitter vote your idea or something Syfy asked for?

Anthony C. Ferrante: That was all Syfy. They thought it would be a “Who killed J.R.?” kind of thing, which I think is neat. Twitter’s been good to us, so any way to prolong that and keep the conversation going I think is worth a shot with this stuff.

Franchise Fred: Thunder tells me the James Bond graphic was your idea?

Anthony C. Ferrante: Oh yeah. That was another thing we didn’t know that we would be able to actually do or pull off. It’s one of those very gray areas where we pay a lot of homage but we don’t necessarily parody. So we’re always on that edge, but I really wanted to do the James Bond opening. The producers were a little on the fence about it initially. So we shot it anyway on green screen. Then I had a friend of mine who did the main titles on the second movie, Jason Swearingen, I had him do a proof of concept of this thing so I could show them this is what I was intending. So I showed them the proof of concept and they’re going, “I hate you. This is good.” So it ended up in the movie. It’s one of those things where you say it and you think it could look really cheesy, and then you show what it could be, and it’s like of course that makes sense for the movie. But even I wasn’t sure it was going to work 100% but I knew we had to at least try. We had Ian in a tuxedo so you had to do that, and I loved it. He did a second pass on it. There were only two passes done on that opening.

Franchise Fred: So you must’ve been a fan of Jason Lives also.

Anthony C. Ferrante: Yup, actually that was a reference point. Jason did it, so why can’t we do it? The other thing too, we were actually going to do a Bond thing with the main titles, with silhouetted girls with fins and Ian Ziering. We were going to go full Bond, because you have the teaser and then you go into the opening titles 12 minutes later. But we started working on that. Timothy Hopkins, my storyboard guy, did some conceptual designs. I wanted him to storyboard this out. We were going to do a mixture, like what Captain America: The Winter Soldier did with their graphics where it looked like a graphic novel but it wasn’t, and with James Bond. But Tim did such a good job with the animatic, he actually fully animated a couple areas of it, we all said, “Let’s just do this for the main titles because this is cool.” So he fully animated that thing in about a week. I love the main titles because we still felt like if we’re going to go full Bond, we needed to have a big Bond theme song, which we were thinking of taking (The Ballad of) Sharknado and turning it into that Shirley Bassey kind of sound. The thing is, we realized it needs to be happy. That’s why we went in that direction.

Franchise Fred: Did you want a new song for the end titles?

Anthony C. Ferrante: We have “Crash” which works a little bit with the Tara thing but it was kind of a fun song about the relationship between Fin’s daughter and the boy in the movie. “I’m gonna crash into you” so it kind of works both ways. There’s another song that we wrote for the movie called “Badass” which will be the second song on the DVD. That’s Fin’s song. It plays when he’s in Kennedy Space Center. There’s some really fun lyrics with that. ‘

Franchise Fred: Babs is “the” Babs, right? So Sharknado 3 is also Animal House 2!

Anthony C. Ferrante: That’s not the actual actress but it is a reference to Animal House. That’s another thinly veiled reference. Again, it was one of those things where we’re shooting at Universal Orlando, so why don’t we do it? I even told makeup and hair to try to make her look a lot like [Martha Smith] in that movie. I don’t think she’s there 100% but she’s pretty damn close.

Franchise Fred: Does having Ann Coulter at the vice president prove that Sharknado is bigger than politics?

Anthony C. Ferrante: Oh yeah. Of course. The thing that’s great about this is, I’ve said this before, Sharknados are bipartisan. There’s no real political agenda with them. It’s right, it’s left, it’s everything. It’s hard to attack a sharknado for having politics. It’s about sharks in a tornado. It’s one of those great things, you can put whoever you want into it and it kind of evens itself out a little bit.

Franchise Fred: Did Mark Cuban want to be in it because of Shark Tank?

Anthony C. Ferrante: I think that’s one of the reasons we were after him, but also just because we thought he would be a great president. And also Daymond John was in the last movie so there’s actually an in joke to him. The president says, “I lost a friend of mine in New York.” So he’s not the first Shark Tank person in Sharknado. There’s a lot of weird meta in joke things and I’m glad you caught the Animal House reference. That’s going to go over the heads of a lot of people.