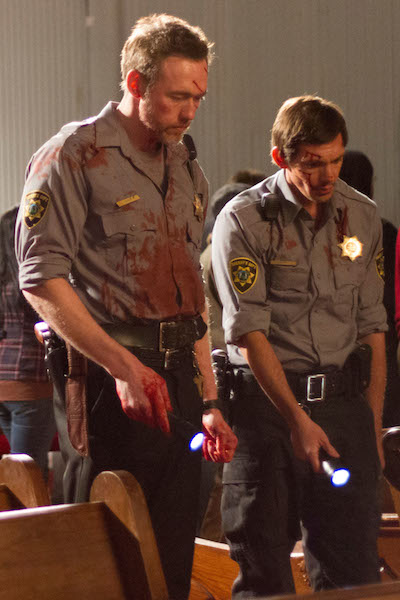 Kevin Durand and Lukas Haas in Dark Was the Night

I was not surprised that Kevin Durand played such a compelling leading man, as Sheriff Paul Shields. I know that Hollywood likes to put people in boxes, and when you’re as good at character parts as Durand is, it can be hard to break out. So I was happy for him, and for audiences, to see Dark Was the Night and I got to speak with Durand about his role in the film.

Nerd Report: Has it been a fight to get Hollywood to see you for leading roles?

Kevin Durand: I don’t even know if it’s a fight. It just hasn’t really existed. It wasn’t really a fight. People generally come to me with these great characters but who usually don’t carry as much weight in the narrative as I do in Dark was the Night. When they offered me that, I just thought wow, that would be incredible to get to use all the stuff that I’ve been bringing to the table over the years in these smaller parts and get to do it over the course of a full two hours. It was such a pleasure. I had so much fun. I hope I get to do more of that, getting to carry that much weight in the future.

Nerd Report: You transform so much from role to role, was there as big of a transformation in Dark Was the Night?

Kevin Durand: Oh, thank you. Yeah, with Sheriff Paul Fields, it was kind of on the page. It was wild to see the movie because it really is the closest that I’ve ever seen myself playing to me basically. The situations are changed. I’m the sheriff of this small town and all this horrible stuff had happened to him. It really felt like I was playing myself in that situation, which as you know, I’m usually a very, very different human being from job to job. It was both unnerving and wonderful.

Nerd Report: Were you basically playing the family drama rather than the monster movie?

Kevin Durand: Oh yeah, absolutely. Just playing the words which even as he and Donny (Lukas Haas) start tracking this beast, we weren’t playing up the horror of what is this thing? It’s more like the fact that all the human beings that he loves in this town are in danger, including himself, including his other son. You don’t want to fail at that too.

Nerd Report: It occurred to me, when everyone in town is trying to help Paul and give him advice, their help is actually as scary as the monster because they won’t leave him alone to deal with things his own way. Did that speak to you?

Kevin Durand: Absolutely. I think Paul just really wishes that he could just get the hell away from Maiden Woods for a little while and just be alone with his thoughts and allow himself to mourn and heal, hopefully ultimately forgive himself. But because he carries that burden of responsibility of being the sheriff of the town, everyone looks up to him, he’s on everyone’s mind so everyone tries to offer their condolences, and try to offer him antidotes and ways to get over the pain. It’s just constantly reminding him of the fact that his son died eight months previous to the start of the film and he cannot get it out of his mind and heart. It’s really weighing him down.

Nerd Report: Was the scene in the principal’s office a fun one?

Kevin Durand: [Laughs] Oh my gosh, yeah. It’s a good place for some brief moments of light. Bianca Kajlich is just so wonderful in this movie. She’s known as being a comedic actor. For most of the film she’s playing opposite that, but then in that moment to get to be with someone who’s very comfortable with humor, it felt like that scene really soars.

Nerd Report: Had you done Dark Was the Night before The Strain?

Kevin Durand: I did. I’m trying to figure out when exactly we shot it. I think it was about three years ago. Jack Heller, who produced and directed the film, we had many conversations in between when we wrapped to now, until the movie was first finished and he was ready to show it to me. Just about how wonderful it is to not be in a rush to get it right. He felt the performances in the movie were really strong and he really wanted to be able to back that up with the special effects that he had to incorporate into the film in post. I’m really grateful that he took the time and got it right. Now I get to watch that movie and I’ve seen it three or four times. I really truly love the film. I love how it marries those genres. I love the fact that you really care about the people and there’s an evil lurking in the woods that could take those characters that you love away in a second. I think it really heightens the movie watching experience.

Nerd Report: I sincerely loved Winter’s Tale. I loved the wild, crazy perspective it took. When you were making the movie, did it seem like an otherworldly, different reality?

Kevin Durand: Yeah, the script felt that way. The scenes that I was involved in definitely had that feel as well. It was one of those projects that if Akiva Goldsman had asked me, “Hey, do you want to come out and fetch water for us for the next couple of months?” I would’ve because it’s so great to be around great creative minds and spirits. I was really grateful to be a part of it.

Nerd Report: Were you aware of the alternate ending?

Kevin Durand: No, I wasn’t.

Nerd Report: Oh, it’s on the DVD. You have to see it. [I describe the alternate ending to him.]

Nerd Report: Has The Strain raised your profile a lot?

Kevin Durand: Yeah, I think it has. I think it’s the first time that people get to see me play an intelligent, heroic character. Luckily, they’re reacting really well to it. I’m so pleased by the reaction so far.