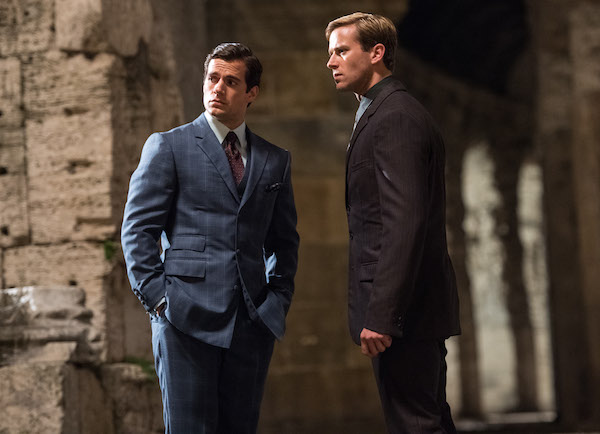 I’d never seen The Man From U.N.C.L.E. TV show, so I can’t tell you how well the movie captures the show. I’m up for a Guy Ritchie spy movie with Henry Cavill and Armie Hammer though, and that was pretty good.

The film captures the “looking over your shoulder” feel of Cold War spy movies, with the Guy Ritchie Snatch energy. Intercutting picks up the pace, subtitles interact with the scene but Napoleon Solo (Cavill) remains cool throughout it all. It’s almost musical choreography, and it is all set to music so the analogy is somewhat overt.

It’s not James Bond. This is clearly looking back at Cold War, but it’s at least once removed. James Bond, even at its goofiest, was always sincere. U.N.C.L.E. is maybe turning these spies into idyllic caricatures, but it’s not irreverent. Even the bumbling is really cool bumbling.

U.N.C.L.E. delivers the action, more than I imagine a ‘60s TV show could have been, but in that Guy Ritchie way I described. The point isn’t the spectacle, it’s how much can they pretend there’s not a big spectacle happening, often keeping it in the background. The focus in the foreground is on something more civil. Without sound effects or a bombastic score, it creates an entirely subtle effect. The stunts are just as big as the competitive summer blockbusters, but stand out for their downplayed context. There is a considerable amount of shakycam, so that’s modern, but it’s mostly intelligible. At least, if something is obscured it is for effect.

Hammer does an impeccable Russian accent, as Cavill does an American one. The one-upmanship between Solo and his Russian counterpart Kuyakin (Hammer) is fun. There’s a slinky villainess, and you can still see Cavill’s Superman muscles under his linen shirt.

The point is clearly to do more Man from U.N.C.L.E. movies and I had a good enough time with this that I would be on board for a franchise. A series of historical spy movies with Cavill being suave ought to have a good future.