The brand new game Velocibox (PS4 and Vita) from Loot Interactive has been out for a couple of weeks now and let me tell you how addicting and fun it is!

Unlike most games on the market these days, Velocibox is all about gameplay. There is no story arch and it just let’s you play the game. It’s a strategic face-paced game that brings back the nostalgia of Atari and Nintendo. You take control of a speeding box (hence the name Velocibox) and you have to avoid obstacles in your path. If you hit the obstacles it’s game over and you have to start the level all over.

To play the game, all you need to do is use three buttons, X, right direction pad and left direction pad. Simple right? Now that the simple part is done, here’s the difficult part, the actual game. The actual game seems a bit harder than the demo that I played at E3 but it’s very much the same game. Now it’s not the kind of difficult that gets you annoyed and makes you want to throw the controller into the tv. It’s the kind of difficulty that makes you want to try over and over just to beat it and have bragging rights over your friend about how got further in the game. It requires you to think on your feet (or couch) and you have to learn quickly how not to be indecisive. If you do eventually beat all the levels, there’s always “uber-hardcore” difficulty, which is for the hardcore gamers.

The graphics are simple yet crisp. Everything is cubed but very smooth looking and smooth moving. The colors of the box and obstacles change the further you get but the game starts out as a simple orange box with navy blue obstacles and a white background. Nothing too fancy. 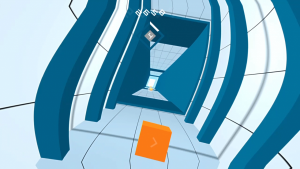 Velocibox is a perfect party game. It’s a game that anyone can pick up and play and to top it off, it only costs $9.99. You can’t get many fun games for that price, let alone many games in general for that price. It’s addicting and something you can enjoy for hours. The courses are almost constantly changing so it always feels a bit new and different each time you play it. I’d say it’s a sure buy. 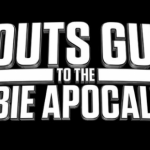 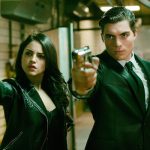