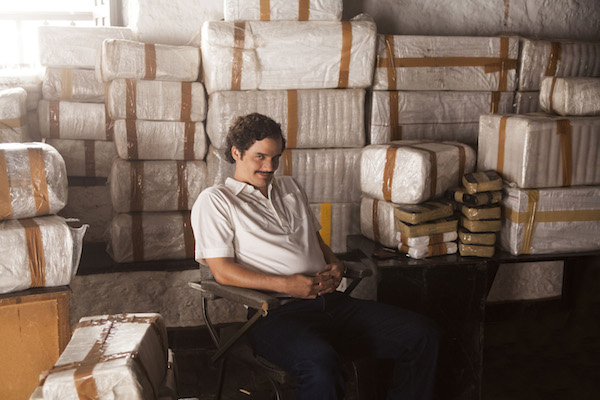 Pablo Escobar could be the role of a lifetime for any actor. At least, it was for the fictional actor Vincent Chase. In real life, Wagner Moura is playing Pablo Escobar in the Netflix original series Narcos. From Jose Padilha, the director of the Brazilian cop drama Elite Squad in which Moura starred, Narcos shows Escobar’s rise in the cocaine trade while the DEA tries to stop him.

I met Moura when Netflix presented Narcos to the Television Critics Association. After the Narcos panel I got some one on one time with Moura. He had spoken about learning Spanish for the role, in which Escobar’s scenes are presented with subtitles. Narcos season one is now available on Netflix instant.

Nerd Report: Did Jose make you audition for this?

Wagner Moura: No, we have worked [together]. I did his two first films and he just called me and I said yes. I didn’t even know what we were going to do. He said, “I have this Netflix thing. You want to do it?” I said sure. We’re big partners.

Nerd Report: So when he said it’s Pablo Escobar, what was your reaction?

Wagner Moura: I was like, “Yeah, let’s do it. For sure.” I was afraid because in the beginning we were supposed to do it in English and I can speak English with an accent. It’s okay. But then we decided to do it in Spanish which, for me, was a big, big deal. Like I said, I had to fly to Colombia and learn Spanish. That was difficult, but I was super excited to do it. He’s probably the most important artistic partner that I have. We did two big films together. Then we did a short film. Then we did this Netflix thing.

Nerd Report: You never had to speak Spanish for a role before?

Wagner Moura: At all. I didn’t know how to speak Spanish at all. It was the most difficult thing I have ever done in my life and I was acting with Colombian actors, people from Chile, Mexicans, people that were born speaking the language so it was a big, big deal for me.

Nerd Report: Is any of the violence in Narcos hard to stomach?

Wagner Moura: His style is completely documentarist. So it’s part of the thing and you cannot talk about the Medellin cartel and what really happened in Colombia in the ‘80s without being really violent because it’s a violent history. The history of Colombia and the history of this policy against drugs that comes from the United States, it’s a history of violence. If we didn’t show violence in the show we wouldn’t be fair to what happened.

Nerd Report: Were you familiar with the Entourage storyline about making a Medellin movie?

Wagner Moura: No, not really. I know what the show is, about an actor, but I have never seen it. Is it good?

Nerd Report: Entourage is, but the story was that movie didn’t do well.

Nerd Report: It’s just funny that was a joke and now the real versions of the Pablo Escobar story are being made.

Wagner Moura: There is a very good Colombian soap opera called El Patron del Mal that I like very much. It’s very good.

Nerd Report: Was Jose’s style for Narcos the same as Elite Squad with very fluid cameras?

Wagner Moura: Yeah, totally. I think it’s the thing that he did that’s more like Elite Squad than I have ever seen. It’s pretty much Elite Squad. The voiceover. He is a guy who tries to understand reality and then tries to explain this reality to people. This is his thing. So the voiceover is very important to him. He was talking about Goodfellas which is of course a big influence, but I think he has his own way of doing this, of dealing with the voiceover and trying to make it as real as possible with the research and actors improvising and handheld cameras. I think what makes this show so unique is basically his style.

Nerd Report: Are there times where you don’t know where the camera is?

Wagner Moura: Not really, no. I’m used to working with his DP that did Elite Squad with us. We brought him to the show so I know what he’s doing and we work well together.

Nerd Report: Have you ever had an opportunity to play so much of a character’s entire life before Narcos?

Wagner Moura: I did a character in a series in Brazil about the Brazilian President once, so this is the second real person that I’ve played.