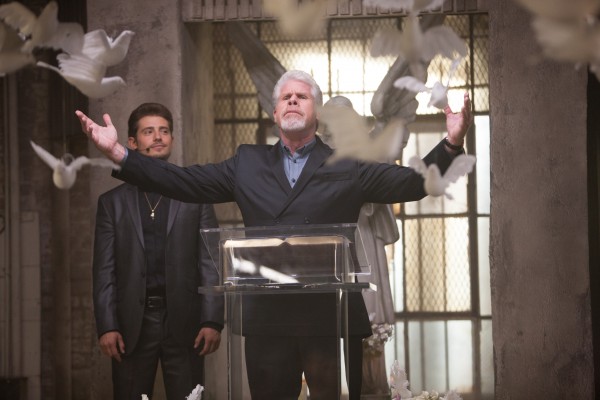 Ron Perlman is back in the Amazon original series Hand of God. If you saw the pilot, which has been available on Amazon Prime, or for free viewing on Amazon video services, you’ve met Pernell Harris (Perlman), a judge whose family suffered a tragedy. His son is in a coma, and he’s started seeing visions of blood that he thinks are pointing him to the person responsible.

Amazon greenlit Hand of God for a series and the entire first season is available today. When Amazon presented a Hand of God panel to the Television Critics Association, Perlman stayed around after to talk to a few more journalists. Nerd Report was there to bring you the interview with Ron Perlman for Hand of God.

Q: How do you relate to the Christianity of Hand of God?

Ron Perlman: I’m kind of agnostic when I’m an actor. When I’m an actor I’m basically a tube of paint to be used at the will of the creator as to what the color’s ultimately end up looking like. The world of Pernell Harris, being the last person in the world who would ever embrace any kind of spirituality, much less Jesus, finally clinging to this for all he’s worth is an act of seminal desperation and calls into question what it is we use religion for, what it is we need religion for. So it wasn’t so much the details of what he was worshiping. It was more the impulse behind it. It could’ve been judaism, could’ve been muslim, it could’ve been anything. It wouldn’t have changed my approach to his zealotry.

Q: Does this open up the conversation about mental health also?

Ron Perlman: Maybe. We’ll see. There’s always a conversation about everything. Is that the goal of the show? I don’t think so, no. I think the goal of the show is to put a whole lot of stuff that you don’t think works together onto the table to realize how complex the human psyche is and what it will do when faced with a certain set of variables. We have a guy who has a very, very strong, very dynamic, very powerful presence who now has become mythified by a series of events. So we’re not dealing with mental health in a clinical way. We’re dealing with stability, balance and things that one needs in order to function properly in a society.

Q: Is it a big challenge as an actor?

Ron Perlman: I mean, as I went along, I realized by watching the different situations that Ben Watkins placed this character and all these characters in, that there was way more to this than two or three facets. This was a completely holistically realized individual with all of the power of a King Lear or a Macbeth and all of the sorrow and vulnerability of a Hamlet. I’m not throwing those words around capriciously. This is royalty, this guy. This guy is royalty. We’re watching him grappling with falling apart and losing, for the first time in his life. The concept of losing is not in his vocabulary so this is a real comeuppance for him. This is a real study in all of the ramifications of loss, or lack of control, of a guy who’s used to waving a hand and people live or die or get rich or get poor. Now he’s compromised for the first time in his life and he doesn’t like it. And he’s going to do everything in his power to meet that feeling head on and win, even if it means destroying himself and his family.

Q: Sons of Anarchy had Shakespearean elements too. Is there something about that epic storytelling that appeals to you?

Ron Perlman: When it’s not gratuitous. When it really has that kind of gravitas, that’s why I prefaced what I said with “I don’t throw these things around lightly.” The minute I hear somebody intone the word Will Shakespeare, my hackles go up. How dare you? That’s kind of pretentious. He’s the greatest writer in the history of the world. For you to compare him to what exists mostly as pop culture these days is rather pretentious. But I’m telling you, by being forced into the situations I was forced in playing the judge, over the course of time, especially the dynamic between him and Mrs. Harris, you realize that these are the rules of the land. Metaphorically, they are. And they have real power. Not manipulated power. Not power that you’re trying to convince an audience they have. They truly behave differently than the common folk. They are able to move mountains by what they do, what they feel because they’re privileged in that way. So it’s a modern version of royalty. It’s a more accessible version of royalty. I felt like I was playing Lear, particularly because of how he’s falling apart emotionally and he’s losing control of the kingdom and he’s grappling with how much of a kingdom do I even want to hold onto? What’s important? Because I’m losing my son. Everything else has taken on a completely different look.

Nerd Report: When KD (Garret Dillahunt) reports to Pernell what he found out at the end of the pilot, how will that fuel Harris?

Ron Perlman: Well, the alliance between Garret’s character and mine is one of the more twisted aspects of all the various relationships on the show. Everybody relates to each other because they have to. For instance, the relationship Crystal Harris, Mrs. Pernell Harris has with everyone is different depending on what she needs and what she wants. Everybody’s got an agenda. In fact the only character on the show that has no agenda is Tessie, the hooker, which is why she maintains such an incredibly important, anointed place in the judge’s life that she’s the one person who’s not asking anything from him or needing anything from him. It’s clearly a relationship that is as adult as is humanly possible. But the relationship between KD and the judge is not for me to comment on. It’s for you to take a spoon and eat it like it’s the best chocolate mouse you’ve ever had. It’s not describable. It’s too visceral.

Nerd Report: Is it a very technical process when you see the visions?

Ron Perlman: It’s always challenging when you’re having to act with something that’s going to be added later on. Unfortunately, it’s become such the tail that’s wagging the whole dog right now. Everything is CG these days. It’s one of the little languages you learn to speak as an actor, and we used it minimally. But use it, we did. There are just things that he’s seeing that no one else is seeing. You’re going to see the world without it like the rest of the world does, and you’re going to see Pernell’s world which includes something . So that’s a question of filmic manipulation, let’s call it, for lack of a better word.