Richie and Santanico pose as sex traffickers to infiltrate Malvado’s food supply, while Sonja forces Seth to kick his drug habit. Meanwhile, Freddie faces off with Sex Machine, who attacks his family to retrieve the codex.

“From Dusk Till Dawn: The Series”
In Season Two of El Rey Network and Miramax’s supernatural crime saga, “From Dusk Till Dawn: The Series,” the show travels between Mexico and the edgy, tricked-out Texas of Robert Rodriguez. It also deepens and complicates the core relationships between the characters, while adding new faces and new dynamics. Our characters are all living in very separate worlds -Santánico and Richie are outside Houston, doing their best Bonnie and Clyde; Seth and Kate are scraping by South of the Border; and Freddie Gonzalez is protecting his wife and young daughter in the suburbs. Carlos Madrigal and Scott Fuller emerge from the Titty Twister, changed men. They will all come together once again – this time facing off against an even bigger threat.

Miramax is distributing “From Dusk Till Dawn: The Series” internationally in all territories.

To find El Rey Network in your area please check out the channel finder at http://bit.ly/ElReyChannelfinder

Follow the “From Dusk Till Dawn: The Series” on social media

“MIRAMAX®” and the “MIRAMAX” Logo are the registered trademarks, trademarks and service marks of Miramax, LLC. 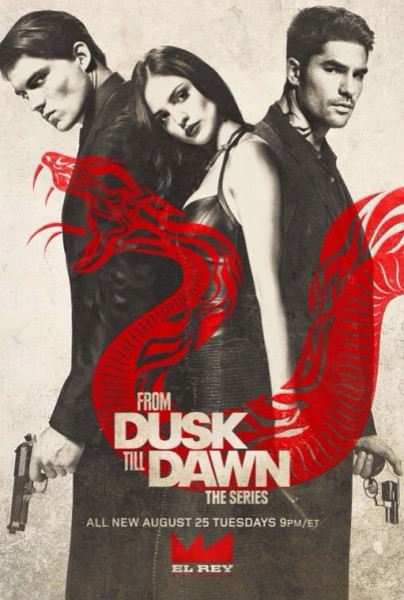