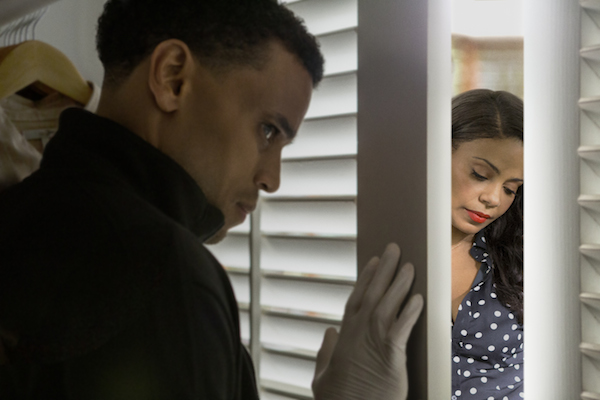 “I wanted to write a movie for Sanaa Lathan whom I love as an actress.” – Tyger Williams, screenwriter

Tyger Williams wrote the screenplay to the acclaimed film Menace II Society, released in 1993. I didn’t realize it had been so long since we’d seen a Tyger Williams movie so I was excited to get the chance to speak with him for The Perfect Guy.

The Perfect Guy stars Sanaa Lathan as a woman who breaks up with her boyfriend (Morris Chestnut) and meets a man (Michael Ealy) who sees to be, well, the perfect guy. Until he beats up random strangers and starts messing with her e-mail accounts. The Perfect Guy opens Friday, September 11 and Williams filled me in on his process for crafting the perfect thriller.

Nerd Report: My first question is about Tyger with a Y. Do you have a cool story about your name?

Tyger Williams: My parents gave me that name. I guess I was a little restless in the womb so they started calling me tiger. My parents never use my first name or my middle name, so needless to say I don’t really use either.

Nerd Report: Have there been a lot of unmade screenplays between Menace II Society and The Perfect Guy?

Tyger Williams: Yes, there are a lot of unmade screenplays. I was 24 when Menace came out. Hollywood in those days were developing tons of projects so I ended up on the development wheel pitching things, writing things and rewriting things. For one reason or another, things just didn’t get made but I was definitely still working. I was also trying to not stereotype myself with that subject matter. I got offered a lot of similar projects so I felt that for a long haul, to break out and do something different.

Nerd Report: So you’ve supported yourself as a screenwriter for over 20 years?

Tyger Williams: Oh yeah. I’ve been working. It just hasn’t been movies that have been getting made. I’ve done features, I wrote a few TV pilots, so that’s pretty much all I know how to do.

Nerd Report: What was special about The Perfect Guy that got it through the system?

Tyger Williams: That was the intention all along. Screen Gems is an interesting place in that Clint Culpepper, the president, really takes a hands on approach with most of his projects. This was a passion project of his from the beginning. He sort of went into it saying, “We’re going to make this movie, we’re going to make this movie.” For a writer, that’s a special place to be in. For all of the development work and amount of time it takes and drafts and all that, to know that you’re constantly working towards a production goal helps. I did my job the best I could. Then we got the cast assembled and from there it was easy to put together.

Nerd Report: Was it a movie you pitched?

Tyger Williams: No, this was something that they brought to me. I had sold them something a few years prior to that, before the Writers Strike actually. Due to forces beyond our control, that didn’t happen so during the strike obviously there was a year and a half hiatus. So we kept trying to find things to do. Shortly after the strike, we were pitching around different ideas. I would give them stuff, they would give me stuff so finally, he said, “Look, there’s this thing that I love.” He pitched it to me and basically I wanted to write a movie for Sanaa Lathan whom I love as an actress. I came on board and spent a couple of years working on The Perfect Guy.

Nerd Report: Over the time you were developing it, did the subject matter become even more relevant? There are so many more ways men can invade women’s lives with technology.

Tyger Williams: I think so. It seems like with each passing year, privacy and the internet and technology seems to invade our lives. There was always an element of that to the script. Carter is an IT technician so that was something that we had in our minds early on. Wow, to be stalked by an IT guy, someone who can truly invade every facet of your life, could be really interesting in today’s day and age. So now when you see the bullying laws and the Ashley Madison hack. So yeah, it’s definitely timely.

Nerd Report: The studio releasing this movie got hacked too so they must take it personally.

Tyger Williams: [Laughs] Exactly, that’s a perfect example of what can happen.

Nerd Report: Yet it seems no matter how many examples of this happens, people still trust their apps and networks. Are we too dependent on things or slow to give up our luxuries to protect ourselves?

Tyger Williams: I would probably say that we are. I’d say the world is moving at light speed. I know I have three or four different devices. If I can’t access the internet when I need to or when I want to, I get very antsy. If people aren’t allowed to use their phone, they sort of freak out, how am I going to make it through the day without my phone? I think they’re sort of dependent upon technology and the cloud to store stuff and back up stuff, but security is a real issue. I wonder how long it’ll take before enough of us are impacted by an invasion of privacy before things actually change, if they change at all.

Tyger Williams: Yeah, there’s some interesting plot devices. With his career, with the amount of technology and things that can be done. Without giving things away, there’s definitely some fun to be had with the technology.

Nerd Report: You said you had Sanaa in mind the whole time. Is Michael Ealy the type of actor who can be the perfect guy one minute and then be terrifying the next?

Tyger Williams: He absolutely is. There’s no doubt that women are in love with him. That in itself gives him a lot of credibility. He’s charming and nice and believable. Then suddenly he’s not. He played a character on The Following this past season and he was really understated but really disturbing. I think what’s interesting about this is the obsession aspect of it. They actually do have a relationship. It’s nice. It’s really great. And then it’s not. That’s really disturbing. As opposed to the normal celebrity thing where they’re stalked by people who are really disturbed who they don’t know and have no connection to them. I spent quite a bit of time looking up all the different stalker definitions. There are clinical definitions and medical definitions and FBI definitions of all the stereotypes of stalker personality and behaviors. It’s a dangerous world.

Nerd Report: I bet it’s a very sexy movie too. How descriptive are you writing those scenes? Or is it just when it’s Sanaa, Michael and Morris Chestnut, you know it’s going to be sexy?

Tyger Williams: It’s a sexy cast. I’ll give it that. It’s steamy. It’s gotten considerably steamier but there’s good chemistry between all of them. Their characters have such amazing chemistry and connections, I think that’s what’s at the core of it. It’s sort of a love triangle because she was involved with, not just a one night stand, but romantically involved with each of them at various points. So the sex isn’t just sex. There’s real passion and emotion behind it. Then you have those three amazing actors.

Nerd Report: What are your favorite sexy thrillers?

Tyger Williams: Oh, Fatal Attraction, for sure. Adrian Lyne, Indecent Proposal and 9 1/2 Weeks is a classic. We haven’t seen too many lately, have we? They were all ‘80s and ‘90s.

Nerd Report: No, but after Fifty Shades of Grey they might be back.

Tyger Williams: That’s right. They may, they may.

Nerd Report: What’s your process as a writer? If this was an assignment, did you start with the story or the characters, and do you have a routine of writing every day set hours?

Tyger Williams: It was very much a workman attitude and that’s how I try to approach it. Wake up, write a certain amount of pages every day, know what my page count is, make my page count the same way a director has to make their days while they’re shooting. If I miss a day, I’ve got to make it up the next day. Write every day. It’s definitely the process that I followed with this script.

Nerd Report: How many drafts did you go through for Perfect Guy?

Tyger Williams: For Perfect Guy, again because Clint Culpepper is so hands on, we did probably maybe five or six drafts. Maybe three or four big drafts, official drafts, and then constantly revising pages along the way. Basically going over scenes and dialogue and different things. At least three to six drafts I’d say.

Nerd Report: Is that relatively low for a studio movie?

Tyger Williams: I mean, those were the major drafts. If I would say how many times I wrote something and submitted it to the studio, or to my executives, then we’re probably well into 20. I know the treatment that I wrote, I did maybe 15, 20 revisions on a 25 page treatment. So a lot of it was worked out before I actually sat down to write in terms of exactly what this movie is.

Nerd Report: Are you working on anything else coming up? More original specs or studio projects?

Tyger Williams: I’ve got some original stuff that I’m working on, got some TV stuff that I’m working on that I’m really excited about that’s really close to going. There’s a book I optioned that I’m really excited about and possibly looking towards directing in the future. So I’m definitely busy, definitely working in original scripts. I love TV. I love what’s going on with television right now. Lots of great shows so I’m definitely working in that area. And talking to studios about all kinds of interesting sequels and remakes.

Nerd Report: Can you say what the book you optioned is?

Tyger Williams: No, things are under wraps right now. I hope to be announcing it soon though.