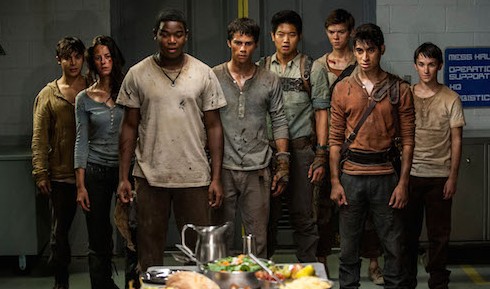 When I put out the call for fan questions for the Maze Runner cast on Twitter, I got more responses than I could possibly have asked within 10 minutes. I hope the fans like the questions I picked, and I definitely emphasized the ones where several fans asked the same question, since that’s what people really wanted to know.

I got to speak with Dexter Darden by phone about playing Frypan in The Maze Runner and The Scorch Trials. The chef in The Glade, escaping the maze puts Frypan in a new position. Not only has he left all his tools behind, but now he’s in the scorch, a desert wasteland where nothing grows anyway. Maze Runner: The Scorch Trials opens tomorrow.

Nerd Report: How much does Frypan miss his cooking tools now that he’s in the scorch?

Dexter Darden: So much. So much of what Frypan knows is cooking in the glade and bringing smiles on people’s faces. So when he’s out in the scorch and he doesn’t have a place to eat, or food to eat or food to cook for anybody else, he kind of struggles with that a bit.

Nerd Report: How did it feel to put on the Frypan costume again?

Nerd Report: How did you prepare for The Scorch Trials? Was there a lot of running?

Dexter Darden: Oh man, yeah. We did about 10 days to two weeks of training because we were in Albuquerque, New Mexico. So running up and down those sand dunes, it was tough because Albuquerque’s a mile high city. It’s like 5200 feet above sea level and at times we were shooting 7600 feet above sea level. So everything you do is just that much more tiring. So when training in Albuquerque it really got out endurance up. It really got us fit and ready to be able to shoot and deal with it because of the vigorous training that was going on.

Nerd Report: Was there ever a point where you felt too tired or exhausted to shoot?

Dexter Darden: All the time. There were plenty of times when all of us would have just those moments of just being like, oh my goodness, again? But our cast mates and Wes Ball, we did a good job of just picking everybody up and making sure everybody stayed motivated and ready to work.

Nerd Report: Were there any accidents or injuries making The Scorch Trials?

Dexter Darden: Oh yeah, everybody got hurt. Everybody got hurt, everybody got sick. We shot at this Indian burial ground and before we started shooting, the people came up and met Wes and told us it was sacred ground. Nobody’s ever shot there before because we’ve heard that it was haunted. One by one by one, all five of us main actors, we all ended up sick or in the hospital or injured. It just got severe. It just got really, really bad.

Nerd Report: What was the most emotional scene and what was the funniest scene to shoot in The Scorch Trials?

Dexter Darden: Oh man, the most emotional scene, not to give anything away, but when Alex Flores, who plays Winston, when he gets sick, he gets caught with the flare. When he goes, it is one of the saddest things in the film because we all become so close. So when we’re watching somebody die or watching somebody get sick, it’s one of those weird nostalgic things of oh my goodness, that’s my brother, he’s really dying, he’s wasted. So that was a tough scene to shoot. The funniest scene to shoot, I think there’s a scene between Thomas Brodie-Sangster and I, who plays Newt. Him and I have this scene where we’re getting provisions ready after we escape from WICKED and we’re just packing up bags of water and we’re changing our clothes. I clock Teresa, played by Kaya Scodelario, changing her clothes. Frypan just keeps staring at her and Thomas pulls his attention. I like it because I like that’s the one moment that we go, “Holy crap, this is a girl” and we’ve never seen girls before. As young boys, we still find girls pretty cute.

Nerd Report: If one of your friends caught the flare in real life, what would you do?

Dexter Darden: Oh man, I would probably cry. I’d probably do the same thing I did in the movie.

Nerd Report: What is the key personality trait you try to bring out in Frypan?

Nerd Report: What’s something you’ve learned from playing Frypan that you use in real life?

Dexter Darden: I did know how to cook. I’ve always loved to cook food so I think just bringing that over in real life. Whenever I’m having a barbecue or having somebody over, people always call me Frypan so I just kind of added to that and just kind of apply that to myself.

Nerd Report: If you could give Frypan one piece of advice, or change one thing about him, what would it be?

Dexter Darden: Hmm, that’s a good question. That’s a good question. If I could give Frypan one piece of advice, I would say just stick with the group because he does that. He’s all about the group, and I would just suggest that he just stays with the group. They try their best to survive because it’s hard out there in the scorch, man. We thought the maze was horrible but the scorch is a different beast.

Nerd Report: What are you going to remember most about making these movies when you look back?

Dexter Darden: Good question. I will remember just the friendships that we built. We still have one more movie together, all of us do. But it’s kind of coming to an end. I think we’re all starting to feel that a little bit because we all have become so close as a cast and we all mean so much to each other. So I’m just hoping to continue to have these friendships like we have now of just being a family and just being able to make a movie with people who I actually love and respect. That’s what I want to keep.

Nerd Report: Does anyone play any pranks on the set?

Nerd Report: Who got you good on The Maze Runner?

Dexter Darden: Will Poulter got me really good on The Maze Runner, Will Poulter who plays Gally. There was a point in time where I started receiving random love letters. I didn’t know who they were coming from and we tried calling the number and figuring out who it was. At the end of the day, it ended up just being Will just writing these little love letters and putting them in my pocket as a prank. Just totally being a goofball, because me, Will and Dylan are the jokesters. Rosa’s really funny too but the three of us, we kid around a lot and like to crack jokes. Just for the fact that he was just doing that was hysterical, and I didn’t even know it for the first two weeks.

Nerd Report: Do you like all the new publicity that comes with shooting these big movies?

Nerd Report: With any book, not everything can make it into the movie. With The Scorch Trials, there might be even more deleted scenes. Which scene do you wish had made it into the film?

Dexter Darden: In the first Maze Runner, I definitely wish the scene between Dylan and I where I’m cooking in the Frypan hut. I think one of the criticisms of the first film was that you never get to see Frypan cook,. You never get to see why Frypan is Frypan. It was a big set piece. It took a lot of time to build and we never really got the chance to show it the way we wanted to, so that’s one scene that I really wish would’ve made it into the film. I think fans would appreciate that.

Nerd Report: Was there a scene from Scorch Trials you wish made it in?

Dexter Darden: On Scorch Trials, I think they pretty much got everything right. There are a couple scenes, like I think there’s a scene with Dylan and Thomas that I really, really did miss that I’m sure is going to make the DVD. There’s a scene where Dylan and Thomas have one of those pick me up moments. I miss that one, and also there’s just a couple moments between Minho and I were Minho’s kind of picking on Frypan running on the treadmill when we first get to WICKED. I start running and then Minho starts running and then I start running and Minho starts running and Frypan just can’t keep up.  I think it’s a really, really funny scene. I think fans would like that.

Nerd Report: If you could’ve played any other character in The Maze Runner besides Frypan, who would you have liked to play?

Dexter Darden: Probably Newt. I really like Newt’s character. I really like what he brings, the realization of who he is and his arc and what he means to Thomas and the group. He’s kind of the glue.

Nerd Report: Did you keep anything from the set of The Scorch Trials?

Dexter Darden: No actually, or maybe. A couple just wardrobe things, wardrobe pieces like socks to remind me of who Frypan was. My favorite thing is there’s a necklace that I wore in the first movie and that I wear in the second movie that I kept that symbolizes unity, so I kept that piece of clothing.