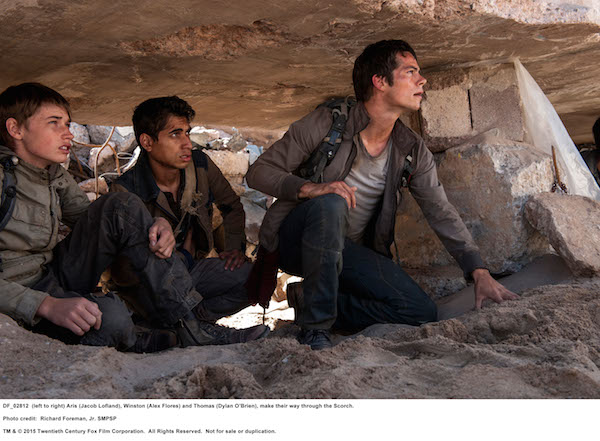 Franchise Fred approves of the basic sequelization of The Maze Runner. It’s a real out of the frying pan, into the fryer situation where the rescue turns out to be worse than being stuck in the maze. An introduction to other survivors suggests other mazes we never got to see. The scorch is a bigger, scarier wasteland than the maze, and a few new characters join our regulars. That’s all from the book. The Scorch Trials is also a technically better movie, but that elevates it from a disappointment to pleasantly mediocre.

The Scorch Trials has much more forward momentum. Where The Maze Runner was treading water between maze set pieces, Scorch begins with an escape and progresses through the wasteland. It’s got a Mad Max quality of visiting different eccentric communities along the way. Don’t worry, I’m not comparing it to Mad Max, just maybe one of the ‘80s Mad Max knockoffs.

The Maze Runner lost the scope of the maze by looking like obvious green screen barely interacting with the foreground actors. The Scorch Trials looks like mostly real locations. I mean, at least they found real rock quarries to double for the survival camps and debris-strewn rubble. That’s a real tunnel, not a green screen tunnel. Even if there are set extensions, they’re based on real sets.

The Grievers in The Maze Runner did not look good, and they were supposed to be the scariest things you’ve ever seen, but at least it was the idea of something different. The monsters in Scorch Trials are literally zombies, and the fast running modern kind. I mean, if you want to do your own zombie franchise, I guess that’s a little better than making Dawn of the Dead fan fiction.

When the young fans start watching more movies, they’ll recognize all the things The Scorch Trials rips off. There’s that thing where you think the bad guy shot someone but really someone else shot the bad guy. Not one of the main bad guys though, just an underling. It’s one of those movies where half the dialogue is characters yelling “Go, go, go!” or “Gotta move” or my favorite, “Whoa whoa whoa!” They completely rip off the glass trailer scene from The Lost World: Jurassic Park. It’s got a fun zombie twist, but it’s still the same scene.

For as long as the movie is, a lot of it is redundant. There’s a scene where Thomas (Dylan O’Brien) fills Teresa (Kaya Scodelario) and the others in on what he discovered. However, we already saw him discover it. We don’t need to hear this again. That’s the part you can skip over. Have Thomas say, “You won’t believe what I saw.” Cut to, Teresa says, “Wow, I can’t believe all that happened.”

I can’t quite get a grip on what the values of this franchise are. Thomas seems like a good character. Give Thomas a rule, he’ll find a way around it. The supporting cast is terribly underserved, which is an unintentional sequel trope too. Ultimately it’s just kids shooting guns. I’m not automatically against that, but it’s not very inventive. They’re reduced to copying the things done in other franchises and when they’re painted into a corner, have a shooting match.

Story problems are likely the source material, though I won’t discount the adaptation process. The technical execution of the film is improved, but only up to the level of the standard Hollywood movie. There’s nothing visionary about it, but fans of the book can look forward to seeing a superior representation of it on screen.