It’s nice to see Sony Pictures using their new release to bring attention to some of their classic and overlooked films. This is the best use of corporate synergy. The film adaptation of Goosebumps is coming in October, so they are re-releasing three other children’s literature adaptations. But that alone might only leave these films relegated to their previous status. So they’ve actually got Goosebumps stars Dylan Minnette and Ryan Lee talking up these films. If that makes some kids who never heard of them before get interested, that’s a win for cinema. It’s also a great chance for collectors to get the Blu-ray, and a digital copy for heir streaming library.

Jumanji is obviously the best known of these films. It was a really suspenseful adventure where each roll of the dice brought a new challenge for the heroes, escalating in danger and spectacle. The Blu-ray includes previous commentaries and bonus features, but includes a new motion storybook read by author Chris Van Allsburg himself. So now I can finally say I read the book, 20 years later. Two episodes from Jumanji: The Animated Series are included are full frame, as was TV standard in the ‘90s. I can’t quite tell if they’re HD but they look good, solid for 19-year-old Saturday morning TV. 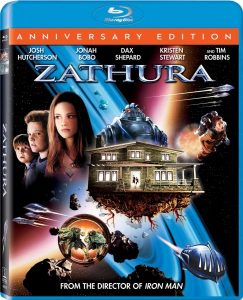 Zathura is the sequel to Jumanji, at least in that it was another Van Allsburg story about kids playing an adventure board game. It’s all new characters, and this time in space instead of the jungle, but equally suspenseful. Funny, both Jumani and Zathura were directed by future Marvel directors, and Zathura stars future Twilight and Hunger Games heartthrobs. The Goosebumps stars seem the least familiar with this film, even though it’s the one Minnette claims to have seen in theaters. It also gets the motion storybook treatment.

The Indian in the Cupboard was a book I read in middle school and was the ultimate fantasy at the time. What if you could bring any toy of yours to life? I don’t recall the book mentioning any licensed characters, so it was a cool acknowledgement when the movie had Darth Vader and Robocop toys come to life. The real point though is that the Native American and cowboy he hero brings to life are actual people and with great power comes great responsibility, as another Sony movie tells us. 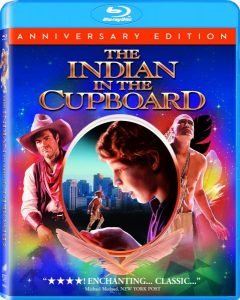 Cupboard features Litefoot in a new interview discussing his work on the film. It’s a good interview. His public speaking charisma hasn’t waned, even if it’s in straight talk form as opposed to his rap, which is what brought him to the attention of the filmmakers. Since this is the film’s first time on Blu-ray, with a new 4K transfer, it looks good. If you have your settings too bright (my Panasonic calls it Vivid) you’ll see all the pixels of the transfer, but on Standard settings you get a smooth image with particularly sharp detail in the schoolyard out in the city.

Anniversary editions of Jumanji, Zathura and The Indian in the Cupboard are available September 22.