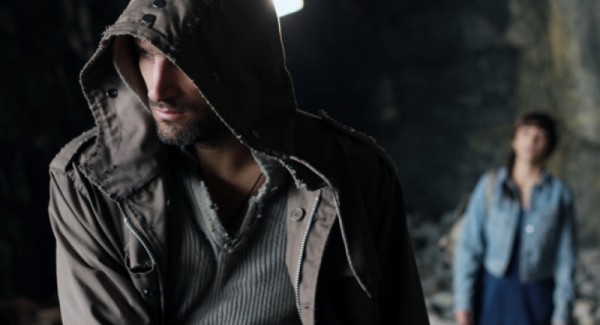 As I get ready to attend Fantastic Fest this year, I think back to a movie I saw at least year’s Fantastic Fest. Redeemer is the latest from Chilean martial artist Marko Zaror. It is now available on DVD and Blu-ray so everyone can see his latest moves, and I got to interview Zaror from Chile about his new film.

A tortured man suffering his own loss, Redeemer (Zaror) takes jobs for other wronged people needing help. He’s looking for his own redemption too. Hopefully I’ll discover another Redeemer at this year’s Fantastic Fest, but action fans should definitely check out Zaror’s new moves, which he explained to me in this interview.

Nerd Report: Were these the most complex fights you’ve coordinated yet?

Marko Zaror: Yes, by far. Redeemer is the best of all my Chilean movies, but I just finished shooting a film called The Green Ghost where we took it to the next level. I had so much more to play with: more time, talent, rehearsals, etc… So I’m really exited to see that one. And it was my first time fight coordinating a movie in USA, so it’s a big deal for me.

Nerd Report: Was Redeemer also your most emotionally challenging role?

Marko Zaror: Redeemer was intense, but I think Mandrill was number one if we’re talking about emotions, for sure.

Nerd Report: Are there now more good fighters in Chile to play your opponents?

Marko Zaror: Yes, there are fighters. The problem is that they’re all small, so it’s hard for me to find a big guy. They can be really good, but if they look to small against me, the audience can’t see any danger.

Nerd Report: Your footwork reminds me of an American boxer. Is that the influence?

Marko Zaror: No, my footwork is actually a combination of Karate point fighting and the work of a good friend, J.J. Perry. He’s incredible stuntman that I saw first in a video in LA. I was impressed with his foot work, so I started practicing. Then we met and worked together on The Rundown and Machete Kills.

Nerd Report: In the room with boards against man in leather jacket, were your rapid strikes influenced by Silat?

Marko Zaror: I’ll say it’s more wooden dummy and Wing Chung, but I’ve never done traditional styles. I’ve been a big fan of Bruce Lee all my life, and I built my own wooden dummy, which looks similar but isn’t like the traditional ones.

Nerd Report: Do your long legs make it easier or harder to sell choreography on camera?

Nerd Report: If you had to defend self on street would you be much less acrobatic and stick to efficient self defense strikes?

Marko Zaror: Haha. Yeah, I wouldn’t be doing a 720. Just some fast boxing and kicking, or maybe a good takedown.

Nerd Report: Here are a few of my favorite moves in Redeemer. Maybe you could tell me how you achieved them:

In fight by the docks, you do a running flip kick. Is this a new move? Is it harder than the axe kick?

Marko Zaror: Yes, that’s a new move for me in my movies. You need some really good power to get up, and then be able to slip and kick.

Marko Zaror: This is quite easy, because the other guy is grabbing my arm, which I use to balance. But it looks good, and I like it because I also get to take out the other guy as I’m going down.

Nerd Report: When you spin on your head and flip up from the ground?

Marko Zaror: That’s a kick-up. Yes, you need to build some good momentum in your legs and then kick your hips up. It’s a fun move.

Marko Zaror: That’s a corkscrew. Ive done this move in most of my movies, so I think it’s becoming my signature move.

Nerd Report: Why was the hoodie the right costume for the Redeemer?

Marko Zaror: I think because he’s wearing it because he doesn’t want to be seen. It makes him more mysterious.

Nerd Report: What can we expect from Torus?

Marko Zaror: That’s a project that I’ve put all my time and passion into. It’s a movie that I think can take my career to the next level. The story is very strong, and the concept behind it will make people ask themselves a lot of questions.

Nerd Report: Mandrill has been established that he exists in same universe as Machine Gun Woman. Was there any talk of having you cameo in that movie?

Marko Zaror: Yes, we’re working on and idea of having Mandrill and Machine Woman together. That would be a lot of fun.