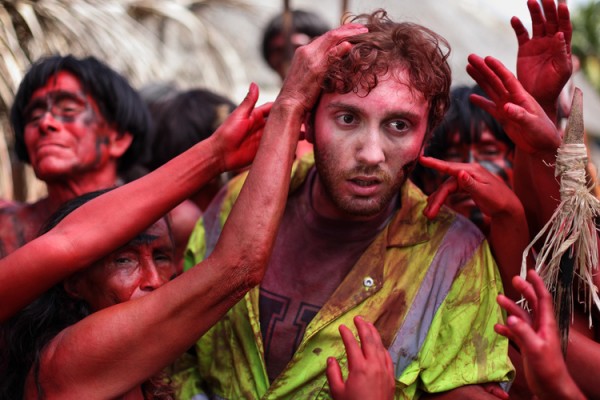 I first met Daryl Sabara at the press junket for Spy Kids when he was eight years old. 15 years later and he’s still passable as a college kid, although remember The Green Inferno was actually filmed three years ago, and screened at film festivals two years ago. So it’s taken an extra two years for me to see Sabara again, now at the age I was when I first interviewed him.

The Green Inferno is an intense film about a group of college students taken prisoner by a jungle tribe when they go to protest deforestation. Even as graphic and terrifying as things get, there’s still room for some levity. Sabara provides some of it as comic relief. The Green Inferno opens Friday, September 25. 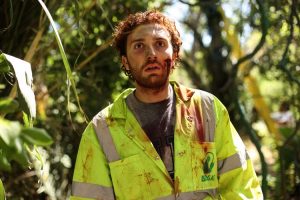 Nerd Report: How long have you been waiting for people to see you in The Green Inferno?

Daryl Sabara: As long as you’ve been waiting.

Nerd Report: Well, I saw it two years ago.

Daryl Sabara: Oh, did you? At TIFF? That was the first time I saw it and that was scary as hell, but fun.

Nerd Report: Did you embrace the role of comic relief?

Daryl Sabara: That was just kind of a fun surprise. I didn’t go into it being like, “He’s the comic relief. I’m the funny guy.” When I read it, the movie was very real and then once you’re there, is even more real. So I mean that was the crazy thing about the Midnight Madness screening at TIFF. I didn’t know how I was going to react after living it and then watching it on screen, but also the reaction from everyone else was intense and insane. I was happy that I got to be a little comedic relief for people. I heard about it before I read it because I’ve been really close with Aaron Burns who plays Jonah in the film. While I was filming Machete, he was working at Troublemaker Studios. Then he moved down to Chile. We would Skype with Nicolas Lopez all the time so he moved down to live closer to Nico to work on Nico’s films. Then Eli came down there and they did Aftershock so I would hear stories and get pictures from Aftershock. Aaron just looked like he was having a blast and every time he would come to the U.S., he would stay with me at my house. In the summer 2012 he was staying with me and he told me he had to go to the Sports Authority store. He was buying carabiners and backpacks and all this crazy gear. I was like, “What are you doing, man? Where are you going?” He told me the premise of Green Inferno and I responded with, “I will do anything to just be on set, to watch Eli direct.” 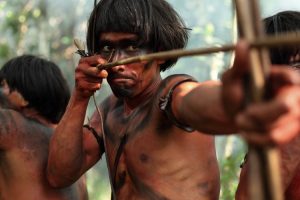 Nerd Report: How similar was the finished film to your memories of making it?

Daryl Sabara: It’s pretty similar. Also time. We didn’t have that much time. We really guerrilla styled everything. It was a four hour travel day. It was an hour car ride to the boat, an hour boat ride through the Amazon to the village. We had to leave before the sun went down because you cannot travel the Amazon at night. Every day we had to pack overnight bags and bring our luggage basically because if it rained, the weather conditions were too extreme, then we would have to stay at the village for the night to shoot the next day. So we had a limited amount of time. I don’t think there’s a lot on the cutting room floor because pretty much everything we shot is there.

Nerd Report: What was it like shooting in the cage?

Daryl Sabara: The cage was crazy, again, because it was real. There’s a lot more reacting going on than acting I feel like because they built everything. There’s no special effects. We got in there and it had rained the night before. So when we got in there, they had set it up. It had been set up for a couple days and we had seen pictures of it so we knew what we were getting into, but then the first day we shot, I think it was Magda who stepped in and slipped and got mud all over her. Then it was like, “Okay, you guys. I guess we should all roll around in some mud so we all look the same.” But it’s crazy after a while being in that cage, how claustrophobic you can feel. It was also so hot in that village, but fun because of who you’re with. There were only 10 of us, 12 of us as a crew, sort of like a little close knit family and a lot of trust going on between everyone. I don’t really feel like anyone had just one job. We’re all helping each other. We all wanted to make the best movie for you guys. We want it to be as real as possible.

Nerd Report: When you go on auditions, do casting directors still remember you in Spy Kids or is it less of a fight to be seen as an adult now?

Daryl Sabara: Thanks to Netflix, they’re all there. They’re all up on there. There was a little bit of time where there was a lull of being recognized and things like that, but now, it’s really strange to have little kids now come up and recognize me because it’s not their generation. It’s 15 years ago, the first one, almost.

Nerd Report: They can still tell it’s you?

Daryl Sabara: Yeah, the hair’s kind of a giveaway at the moment. Casting directors, I’ve just been doing it since I was really little. It’s not really Spy Kids but it’s more just, “Oh, I’ve been seeing him for 15 years.” They’ve seen me grow up. They’ve seen my adolescent stage and my weird, awkward puberty moments.

Daryl Sabara: It is, yes. I had a really good time with that one. That was actually the first audition that I went in semi-method because the casting directors Ruth [Lambert] and Robert [McGee] had cast me in a movie called Her Best Move when I was 13 and Wizards of Waverly Place. I originally was supposed to go out for the best friend but I saw the Kyle character and was like, “I want to be this *sshole guy. This is different from Juni. I want to be different.” Because I knew that Ruth and Robert knew that I wasn’t that guy, but I had never met Bobcat, I wanted him to believe me. I went in there and I was a pretty big prick when I walked in the room. Bobcat was like, “So, you’re reading for Evan, the best friend?” I said, “No, I’m not going to f***ing read that. I’m going to read what I want to read. I’m going to read for this role. Is that okay with you?” He was like, “O, O, okay.” I had the other part memorized just in case and I felt bad because I felt like I had maybe taken it a little too far. I was like, “I know the other part if you want me to read it.” He was like, “No, no, that’s okay.” A week later I sat down with Bobcat and he’s like, “You were messing with me, weren’t you? I’ve been background checking you for the past week and no one says you’re like the guy that I met.” I just told him, “I didn’t think you’d believe me.” He said, “Okay, I just want to make sure I wasn’t going to work with an *sshole for six weeks. You’re in.” That was fun.

Q: Did you keep in touch with Robin Williams after that?