Writer/director Jaco Van Dormael’s previous film, Mr. Nobody, was my favorite film of 2009, 2011 and 2013. ’11 I when I saw it at a Los Angeles Film Festival program for festival hits that didn’t land distribution. It had won awards at the 2009 Venice Film Festival but did not get a U.S. release until 2013. So I was very excited to see a new Jaco Van Dormael film.

In The Brand New Testament, we learn that God (Benoit Poelvoorde) created man because he had tried the world with different creatures and it didn’t work. This movie had me at giraffes in the supermarket. God also complicated our lives because he was bored, making us wait in slow moving lines and always have multiple hassles to deal with at once. 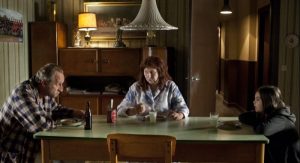 God’s daughter Ea (Pili Groyne) wants to do something about it though. To screw with her dad, Ea tells everyone alive when they are going to die, throwing God’s design into upheaval. She descends to earth to recruit six new apostles to write the Brand New Testament, the six people perhaps most dramatically impacted by learning how long they have to live.

Mr. Nobody dealt with spiritual themes that really spoke to me, offering a profound message about all the choices we do and don’t make, with wonderful surreal imagery. Brand New Testament clearly goes specifically religious with it. You might say it’s a bit creationist, since God creates the modern world, effectively erasing the recent past let alone evolution. Creationism taken to the most ridiculous extreme.

There are so many ways to interpret Ea’s defiance and Van Dormael (with a co-writer Thomas Gunzig on this one) seems to explore them all. What people decide to do with their remaining time ranges from the joyous to the macabre to the heartbreaking. Her delivery method causes some ironic comedy too. 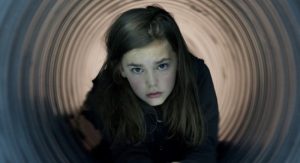 The film balances three very strong narratives evenly: society learning their death dates, God having a rebellious daughter, and the new apostles. The sixth apostle is an especially profound and current story. Then there is an equally powerful resolution to these complex stories. Along the way, God gets beaten up like a Home Alone burglar and it’s hilarious.

“Magical realism” is a term used to describe stories set in our real world that include fantasy elements. I think The Brand New Testament is real magicalism. It posits that the most supernatural aspects of Christian belief are literal, and have actually evolved to include modern technology. Magic is the status quo and reality is just a guest on this ride.