High-Rise has everything I would love in a movie: collapse of society, foraging for supplies, absurd debauchery and more. It’s either the source material by J.G. Ballard, the adaptation or director Ben Wheatley’s take on it that loses me, so we’ll have to agree to disagree, cinematically speaking.

Dr. Robert Laing (Tom Hiddleston) moves into a high rise apartment community designed by The Royal (Jeremy Irons). We are introduced to all of the residents very quickly via a party because we’re going to need to know who everyone is later. First, the power goes out on the bottom floors where all the poor live, because the rich are using up too much. Then they lose all power and water and the residents turn into savages. By the way, did you get that the rich live up top and the poor below? Yes, it’s a vertical Snowpiercer. 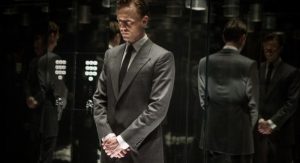 The frames of the aftermath of carnage are fun to look at, and I’m all about poor people stealing supplies where they can intercept them. Wheatley and the production designers created a great looking world of the tower with a sterile supermarket and elevators lined with windows on all sides. Then he gets all Ben Wheatley up in there with way too many close ups of people dancing in slow motion and kaleidoscope distortions. The montages of chaos are scored with horror music, because obvious things are obvious.

I trust the story comes straight from the J.G. Ballard novel, although the filmmakers control the adaptation. I’ll even give you that no one bothers to leave the tower, even though they all have cars and the parking lot is a major plot point. “No reason,” as Quentin Dupieux would say, but I’ll accept that they just don’t feel like leaving if it’s for a bold new take on the topic, but you can’t have it just for the old “society goes primal without laws.”

I’m not surprised an R-rated violent film about the breakdown of society uses rape as a plot development. Disappointed, but not surprised. Even if the rapist is punished (and spoiler alert, I’m not saying if he is or isn’t), it still doesn’t solve the problem of portraying rape on film.

Animal abuse is also cinematic button pushing, and High-Rise triples down on it with three scenes of dogs being beaten or killed. I don’t doubt that savages wouldn’t be sensitive to an audience either, but dig a little deeper. There must be ways society can break down beyond the most obvious taboos.

There is surprisingly little geography established given that they’ve already got the structure. I guess we’re just to assume if rich people are there, it’s a high floor, and vice versa for poor low floors.

Subtlety is not High-Rise’s game, but it doesn’t even give you credit for having watched the movie they just made. Right before the credits roll, it actually features a historical radio broadcast blatantly stating the film’s theme. You know, just in case the high/low, up/down part wasn’t clear.