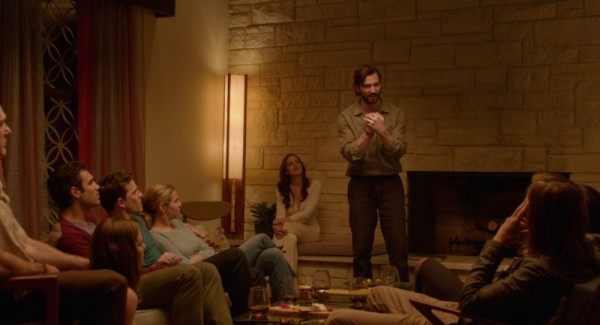 David makes a presentation in The Invitation.

The Invitation is Karyn Kusama’s best movie. I know how important Girlfight was to female filmmakers and leads, the Latino demographic and I have it to thank for Michelle Rodriguez in Furious 7, but I hope Kusama would accept that 15 years after her first movie, I say she’s developed even greater skills.

It’s no surprise Eden and David have an agenda. Why else do people throw reunion dinner parties after two years of absence? They’ve found an alternative way to deal with their grief, and they want to share it, but this is where it gets fascinating. Their friends would support Eden and David finding peace for themselves, but they don’t support pushing it on everyone else.

Eden and David test their friends’ compassion by confronting them with unwavering dependence on their own beliefs. It’s an ambush, even if the group wanted to be open to them. I try to be compassionate in every interaction but some people abuse it. At a certain point you have to say, “Okay, enough. I heard you and I’m not interested.” David and Eden are doing everything except allowing their friends to feel uncomfortable, which is vital to genuine compassion. Compassion includes accepting negative feelings too.

The Invitation is a scathing attack on alternative morals, but you can tell David, Eden, Sadie and Pruitt have no conviction. They’re just posing. Real conviction doesn’t require anyone else to follow you. You can offer, but rest assured that you’re on the right path even if you’re alone. And there are successful, beneficial alternative beliefs that do not require other people’s approval.

Will is a man of conviction. With every presumptuous suggestion David, Eden, Sadie or Pruitt offers, it gets to a point where he has to insist, “No, this is me. And the more you try to change me the more suspicious I am of you.” Will has his own demons but he is our anchor for owning them unwaveringly.

The script by Phil Hay and Matt Manfredi nails all the nuance of this debate, and Kusama’s staging of the performances ensures that the audience feels uncomfortable, but could still be an innocent misunderstanding. The geography of the house is very important too. Kusama establishes what you can see from which room, and the windows play a huge role.

Maybe I didn’t make The Invitation sound like a horror movie, but really this is the scariest part of human interaction. It would be great if everyone could just read when they’ve crossed the line but that is what self-preservation is for. And even self-preservation can go too far the other way. What a fascinating subject for a movie.