The name of the episode is “Knock, Knock.” Last week, certain villains from Arkham were kidnapped. And this week they are unleashed on the city. The leader of the newly formed gang is Jerome, the Joker-like character. I don’t consider this a spoiler since he’s been all over the video and commercial promotions. But he’s not the only villain of note; Barbra is becoming a pretty sick and dangerous girl in her own right. If she’s not Harley Quinn, she ought to be.

Things are getting very dangerous in Gotham, and this year, shady cops aren’t the problem. It’s the actual bad guys. The havoc they cause is both cartoonish and brutal. People are pushed off the roof of a building in a way that is both comical and disturbing. The Mayor’s head ends up in a box, while he’s still alive, and there may or may not be a tarantula in the mix. And what almost happens to a busload of high school cheerleaders is unimaginable. 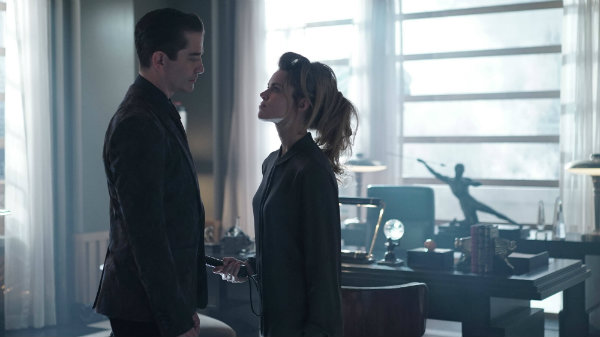 To say that Gotham has gotten dark is an understatement. One character proclaims, “Monsters are coming.” And by the end of the episode, we believe it. The last fifteen minutes of the show are harsh and heartbreaking. Jim Gordon is in over his head, and that point is made painfully clear. Gotham needs the Batman now more than ever. Unfortunately, Bruce Wayne is only a kid.

Bruce Wayne is still trying to figure his dead father out, and he’s so driven that he and Alfred almost part ways. But we all know the mythology. What bothers me is that Alfred’s role is undefined in the show. He calls himself Bruce’s guardian, but sometimes Bruce orders Alfred around like a servant. Making Bruce’s character less heroic and more of a spoiled rich brat. But hopefully things start changing by the end of this episode. And another familiar character is reintroduced to help Bruce become the man he’s destined to be.

A lot happens in this episode. But surprisingly, the Penguin has nothing to do with the mayhem. (Unless he’s working behind the scenes.) And that’s an assumption, not a revelation. We also didn’t see any badness from Selina Kyle this week. But I’m sure she’ll be back as well.

This episode rocked Gotham, with no bat in sight. And it looks like Jim and Harvey are going to have to fight their own battles. I want to say more, but I won’t, because that would be giving too much away. Keep an eye on Edward Nygma though, because he’s finally getting interesting. I’ll sign off with a few words of advice, and a big bloody kiss. “Don’t play Russian roulette, unless you play to win.”