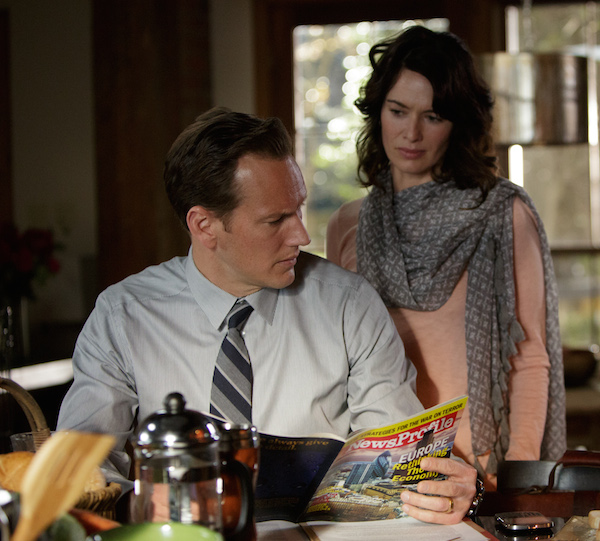 This week everyone can finally see the movie that blew me away at Sundance. Zipper stars Patrick Wilson as a lawyer who becomes obsessed with an escort service. This is troubling enough for a married father, but even more so when his political ambitions put him under further scrutiny.

Mora Stephens, who cowrote the script with Joel Viertel, directed Zipper and I got to meet her in Park City after her screening. Now that the film is coming out, I was happy to reconnect with her by phone and have an in-depth conversation about her film. Zipper, now available on Blu-ray, DVD and digital formats.

Nerd Report: Have you made any changes to the film since Sundance?

Mora Stephens: No. This is the movie I wanted to make and it’s the same movie.

Nerd Report: Watching it again, and having just bought something from a hard selling salesman (a cell phone), is the escort service a rare industry that’s actually sensitive to its clients? Every other industry is such a hard sell.

Mora Stephens: It’s a very tailored experience, right? I think at that high end that the movie is exploring, those $1000/$2000 escorts, the difference in price is all of those details of making a person feel as pampered as possible. There’s a whole etiquette and details to creating the perfect fantasy. In the movie, Sam is trying to recreate his crush on Diana Agron’s character, so he’s channeling that tight sweater, mohair and soft girls. All the girls are all based off that one conversation that they had, also knowing that he’s a lawyer and creating a perfect girlfriend experience just for him.

Nerd Report: Is it also about how quickly a novice becomes an expert at this world? He knows exactly what he wants and who he wants to meet.

Mora Stephens: Yes, I think particularly because that first experience is so surprisingly unsleazy for him. I think with Alexandra Breckinridge playing that character, there’s an element of pampering and comfort and intimacy. That’s another thing that Patrick and I were talking about. Even though he has this great family life and all these people believe in him, that first moment of real intimacy is with a total stranger. The fact that that first experience is like that is part of chasing that again. From all the details of the ritual leading up to it, it created such a big impression on his headspace.

Nerd Report: When he gets his political donations in an envelope, does Sam become the escort then?

Mora Stephens: Yes. If you look at the way Richard [Dreyfus] is playing him, working with Richard was amazing from moment one to how fun it was to hang out with him and all the other actors because he’s such a great storyteller. I hope you get to interview him as well. He has so many amazing stories about this topic. One idea we were talking about was about the character Hiller being a pimp from the beginning. In that first scene where they meet each other at the charity ball, he’s seducing him and there’s always an element of sexual imagery in the way he talks to him. “I’m the other woman.” There’s an element of the way in which he’s seducing him that is not just about the politics but there’s a sexual element to it as well. It’s layered throughout that character but comes full circle with that envelope. In truth, in the escort lingo, it really is called “donations.” That’s how they keep it a little more legal.

Mora Stephens: Absolutely, that was the original title and in every stage of the movie I fought for it because the term “zipper problem” I came across in research was coined under the Clinton scandal. It was something I had really heard in talking about political sex scandals. It’s something I hope when the next scandal happens, and there will be another one, people might reference that to the movie in part of the dialogue.

Nerd Report: It is an election year. Should we be looking into our nominees very closely?

Mora Stephens: I’m more advocating to not be so surprised and to look more at somebody’s actions as a politician.

Nerd Report: So many of the movies we see are aspirational. Is it equally compelling to see a downward spiral?

Mora Stephens: I certainly gravitate towards those movies and plays and stories. I’m drawn first to the place of character if there’s some sort of interesting psychology, if the story can take me someplace I hadn’t seen that character go before. So I love antiheroes both in movies, and I feel like we’re in a renaissance of antiheroes in television. I love those kinds of stories.

Nerd Report: As a matter of filmmaking, the first scene with Alexandra where she’s waiting on the bed for him is such a sensual framing. Had you storyboarded that or did you find it on the day?

Mora Stephens: That was an image I thought about while writing it of revealing her. The exact framing we found on the day. Everything was shot on location but I was drawn to that image of revealing her and the fact that I wanted the room to be daytime, but to have that feel of just a crack of light coming through the curtains. Those were the two main images of wanting to create a very intimate dark space that felt like it was lit just by this crack of light, but we were still aware it was the middle of the day. These are all little adventures he’s having within his normal work day. Then certain things costume-wise we were planning out with costume designer Shauna Leone.

Nerd Report: Did you shoot the whole montage of his escort encounters in one day?

Mora Stephens: That whole addiction/campaign montage, we shot the whole movie over 25 days and pretty much every single day that scene was on the call shoot. We were shooting some little piece of it. In the script it’s like a page in the script, or a page in a half. But to actually shoot little bits of it over the course of the whole shoot, there were six escorts that we shot all in one day. Patrick will probably have some good stories about it. I think there was one day where we had a ridiculous amount of sex scenes and masturbation scenes all in one day that he had some very funny comments about. He was a very good sport.

Nerd Report: What is it about Patrick that no matter what he does, we like him?

Mora Stephens: I think it’s both because he’s a tremendous actor and brings a lot of empathy and is willing to go to really dark, brave places with his character, but also comes from him being a genuinely good, amazing person at his core as well. What drew me to him for this role were he’s, in real life, very smart and a real gentleman, a good father, a good husband and a very collaborative actor to the other cast. But yet also, he’s willing to go to these really dark places and is curious about if something scares him to actually go for it. One of the first scenes we talked about was that scene in the car with Penelope Mitchell, one of the scariest places to go to in the script. He really went there.

Nerd Report: Was it a significant decision to make him southern as opposed to just generically American?

Mora Stephens: Well, we wound up shooting in Louisiana. There were many incarnations of where we might wind up shooting. Then once we were shooting in Louisiana, I got enamored with the idea of making it an imagined southern city. I didn’t want to make it Louisiana because that is one place that is very specific in the imagination and it’s one of the few places in the United States where Vitter had had multiple political sex scandals and still remains in office. They have a very specific point of view on sex scandals there in Louisiana. So we didn’t want to make it Louisiana but I liked the idea of it being in the south, a place of tradition. Patrick’s own family is from there so he has his own roots in the area and it grew out of that. But even while we were filming in Baton Rouge, the modern city in the south is a mix of all these different accents. I wanted it to be Anywhere, USA.

Nerd Report: Do you know what your next movie is?

Mora Stephens: Yes, I’m working on a few projects which I’m really excited about. As soon as I can talk about them, I would love to talk about them with you. Joel [Viertel] and I are writing something right now and hoping to go out to cast soon.