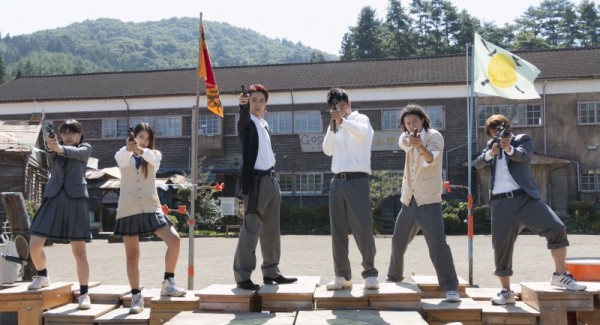 Assassination Classroom is the kind of idea so strange they could only get away with it in Japan, yet so whimsically absurd that it’s what movie audiences everywhere need. At least this one does. It is based on a manga, which has also been adapted as an animated series too, yet you need no knowledge of the source material to appreciate its weirdness.

An alien destroys the moon and is planning to destroy the earth, but makes a deal with the government to train a classroom full of students to assassinate him. If they succeed, they win 10 billion yen in addition to saving the world, but otherwise this just keeps him busy until his deadline. He can dodge bullets, regenerate tentacles and more, so they call him Unkillable Teacher, or UK for short.

A comedy about school violence is understandably a tough sell in the U.S., but trust me, there is no risk of imitation, nor bad taste. The students are provided with weapons that will only hurt the Unkillable Teacher, but have no effect on humans. It is literally just a bizarre self-fulfilling premise that allows teenagers to shoot and stab an alien while never committing human on human violence.

The kids come up with some inventive ways to try to exploit UK’s weakness, but every time they do, it seems like UK has some new power he’d kept secret until such time as it benefited him. Or, such time as the audience needs an explanation for why he’s not dead yet.

What’s so weird is how hard the film tries to make sense out of such a nonsense premise. UK takes genuine pride in his students and you see them become emotionally attached. It doesn’t really play the whole “student must overtake his master” card. It’s just an absurd emotional roller coaster that rings true at every loop.

The visual effect of UK looks cartoonish. That’s appropriate since the live-action movie was preceded by art and animation. A Hollywood film would make the mistake of making UK more realistic, but this way matches the tone of the subject much better.

I just couldn’t believe what I was watching, and that’s a great feeling to have after decades of watching movies. And there’s already a sequel, Assassination Classroom: Graduation, so Franchise Fred approves!