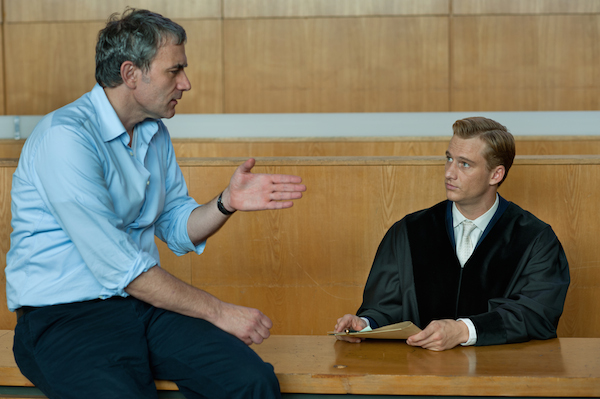 The tragedies of human history have long been the subjects of cinema, and The Holocaust has been the subject of some of the best films. The new German drama Labyrinth of Lies takes a different perspective on The Holocaust. In 1958, Johann Radmann decides to prosecute Nazis involved with Auschwitz.

Nerd Report: Is this a pre-courtroom drama because it’s all of the preparations that went into it before he actually went to court?

Giulio Ricciarelli: That’s actually very nice. I will write that down and use it. Yes, it’s a pre-court drama.

Nerd Report: How much research went into Labyrinth of Lies?

Giulio Ricciarelli: A ton, actually. It was always very clear that we have a very important story to tell but that we need to be historically very accurate. So we worked very closely with historians. They read every draft. They watched every rough cut. We read extensive material that is available so there was a lot of research, but when we were writing the script, we were going back and forth. You have to read a lot but then you also have to write a script that is also a creative aspect. So we were going back and forth, basically.

Nerd Report: Alexander, was your character based on a composite of multiple real life prosecutors?

Alexander Fehling: Exactly. It was a composite of three prosecuting attorneys during this time. One of them is now over 80 years old. He’s still alive and he really helped Giulio developing the script and I had the good fortune to meet with him and talk to him and ask him stupid and banal questions. It was quite helpful.

Nerd Report: I imagine a case like this is so complicated, what are some interesting things you weren’t able to include in the film?

Giulio Ricciarelli: The interesting thing that we tried to give an impression, but we couldn’t really talk out because it’s too legal is that in 1958 when Fritz Bauer and the prosecutor started the trial, they started out wanting to name Auschwitz a murder machine, and make any involvement in that machine, be it an accountant or a cook or a typist, part of a criminal act and be able to prosecute people. But the German justice system who was still filled with Nazis wouldn’t allow them that. They had the absurd situation that they had to prove actual murder. Manslaughter, there was already a statute of limitations. After 15 years, you could not be tried anymore. So they had to prove individual acts of murder. In the last couple of years, that legal point of view changed. They arrested a 93-year-old woman who was a typist. Five months ago they had Groning, an accountant on trial. Groning was known to the German prosecutors office for 30 years. They always said, “Okay, but he was just an accountant.” In the last years that changed. So now just doing anything there is considered a crime. That is, legally, I think a very interesting thing.

And one little side note, the Allied forces had asked the Germans to include crimes against humanity in their penal code at the end of the ‘40s. The German government, knowing quite well why, did not put that in the penal code. Otherwise, it would’ve been easy to prosecute every Nazi. “Crimes against humanity” is very flexible and you can do a lot with that. They didn’t have it in the law so they couldn’t use it of course.

Nerd Report: In the movie, the youth of the ‘50s didn’t even know about Auschwitz. Nowadays, are all the kids in Germany well educated about the Holocaust?

Giulio Ricciarelli: Yes, I would say, yes. Starting with this trial, Germany has started doing a quite meticulous job of dealing with the past. It’s definitely something that is taught in school and I think every German student visits a camp while he’s in school. There is films of course being made like our film, but also other films. Society has decided to really deal with it and it’s really part of the curriculum.

Nerd Report: Alexander, what was your experience growing up and learning about The Holocaust? Was this trial something you learned about in school?

Alexander Fehling: Actually, I don’t recall that we learned something about these trials in school. If so, it must’ve been very little because I didn’t remember anything of that, which is a shame I think. What Giulio just said, I think now is the time for every pupil and every student. This subject is so present in the education system, that there is almost a little tiredness. People say, “Okay, we’ve seen all these films, we’ve seen all these documentaries about Auschwitz. We can’t do it anymore, it’s too much.” Maybe it would be good to shift the space a little bit and make it less documentary and a little bit more about this actual development, how Germany really came to terms with the past. I learned a lot about these things when I was in school and the very first feature film I was in is about a young man who was doing civil service instead of the army, in Auschwitz by accident actually, and he’s taking care of an old 80-year-old Polish survivor of the concentration camps. So 10 years ago I already spent two and a half months in Auschwitz in this little city and I learned about these things a lot, a similar subject matter.

Alexander Fehling: Nobody, and it’s a shame. It’s interesting because out of our history, in Germany, we almost never use the word “hero.” If you talk to Americans and someone asks you, “What is your hero?” We have a huge problem with this word in our history, understandably. I would say Fritz Bauer should really be a hero.

Nerd Report: We’ve all heard of the Nuremberg trial but there’s a lot more to the Holocaust and its aftermath.

Giulio Ricciarelli: The Nuremberg trials by the Germans was very much perceived as the winner of the war puts on a trial, but the first time ever in human history, not just in German history, the Auschwitz trial was actually a country putting its own soldiers on trial. That is something that had never been done before. It wasn’t heard of so it was really a huge shift in the culture of every democracy I think, what Fritz Bauer and the prosecutors accomplished. Also Fritz Bauer had a nice saying: “Nobody has the right to be.” So basically making everybody responsible for his actions no matter who tells you to kill, maim or whatever. Today in democracies I think we feel that’s a given, but that is a culture that really started 50 years ago with this trial. So it’s quite remarkable not just for Germany but I think for everyone.

Nerd Report: Giulio, what was your decision to focus on the pre-trial activities and not show the courtroom trial?

Giulio Ricciarelli: That’s always the big question if you do a historical theme. It’s like a mountain and there’s many ways up that mountain. I felt what was most important to actually give the historical dimension of this trial, to really take the audience into the ‘50s and make them feel the amount of denial and covering up that was going on. I didn’t know that, so that was to me the amazing aspect of this story, that it took almost 18 years for Germany to actually face what it had done. I felt this was really important. And the second thing, while writing the script we realized that we tell a lot of history that is very interesting, but it’s also a drama. It’s about a young man basically going through a very emotional and turbulent journey to change and to become much more humble. Basically, he grows up in this story. In the beginning, he’s very black and white, very sure, sits on a moral high horse. He almost breaks down when he’s confronted with what actually happened and it really changes him profoundly. So that is basically our drama. The third thing is, and you probably know this, especially as a first time filmmaker but also consciously, because we are in 2015, I wouldn’t have wanted to re-enact, for example, the testimony of a survivor. I think audiences are sophisticated. Then you have an actor in a costume acting as if he was there. Claude Lanzmann, who did Shoah, he wrote extensively about what can you actually show about Auschwitz? As a filmmaker, I think I wouldn’t have felt comfortable doing that.

Nerd Report: Was that file room where they’re stacked up to the ceiling a real file room, or a set you built?

Giulio Ricciarelli: It wasn’t the original document center but it was a file room. Interestingly, it was the archive of the Ministry of War of Bavaria, Munich. Before the first World War, they weren’t called Ministry of Defense. It was actually called Ministry of War. I think they were much more honest than today. That’s their archive and they let us shoot there. So that archive exists and if you go to Munich, you can actually visit it. You will see what you see in the film.

Nerd Report: Alex, had you ever played a lawyer before?

Alexander Fehling: No. That was the big question. Are you playing a lawyer? What are you playing? I was not only concentrated on his profession I think. I needed to have a little feeling for the hierarchy in this profession. I think that was important about the development of the legal system that Giulio just explained. On the other hand, I think the scenes were about something else. Sometimes it’s pretty simple. You’re in a conference room and there are some people discussing something in suits. All these things work for you and you have to let them work for you I think.

Giulio Ricciarelli: I think Alexander brought a quality to the part. Although the lawyer aspect is very important, first of all, he’s very smart and he knows that he’s smart so the whole way he treats language and dialogue I think is very convincing for a lawyer, because lawyers are people who know how to talk. They know how to put complex facts into language. So that was important I think for the part Alexander played but also for the others that you had people you believe could discourse on this intellectual level.

Nerd Report: Alex, was the scene where you visit the camp especially heavy or somber?

Alexander Fehling: Yes, it was, because this is a scene, just two guys standing there and really revealing what they’re thinking and what they’ve missed in the last month. I remember that it was not easy to really achieve the essence of the scene without being pathetic or without being too emotional in an obvious sense. So the honesty of the scene I think wasn’t easy to achieve.

Nerd Report: Were you actually filming in front of Auschwitz?

Alexander Fehling: No, it was recreated. I think you’re not allowed to shoot in these camps. I think even to shoot from outside is a big issue so we went somewhere else I think in Bavaria and they recreated the camp.