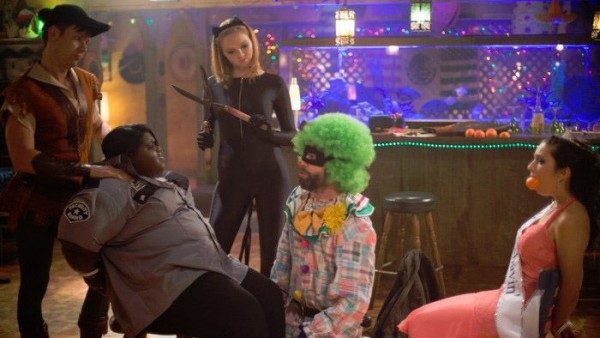 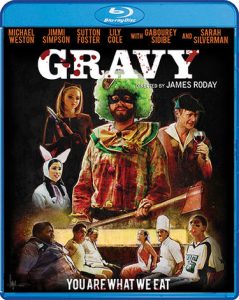 The new horror comedy Gravy has a diverse cast of celebrities and recognizable character actors that includes Sarah Silverman, Sutton Foster, Gabourey Sidibe, Lily Cole and many more. Paul Rodriguez plays the owner of a restaurant that gets taken hostage by gang of psychopaths with crazy plans for the staff and the kitchen.

This interview with Rodriguez contains some spoilers for Gravy, because some of the things that happen are so outrageous, we had to talk about them. The film is the feature directorial debut of James Roday, who had directed some episodes of his show Psych and an episode of Battle Creek. Gravy is now available on DVD and Blu-ray from Scream Factory.

Nerd Report: I don’t want to give too much away but you’re not in Gravy for very long. Were you bummed by how early you exit the film?

Paul Rodriguez: Yeah, I was because I was having a lot of fun on the set but I knew going in after reading the script that I wasn’t going to be long. I maximized my time by doing what I was asked to do. They gave us a lot of takes to improvise certain scenes. It worked out. I enjoyed it. It was fun working with all those young people. It was kind of sad to be the older guy on the set, but that’ll happen to you if you look both ways before you cross the street and get to live a long time. For me, it was my first horror movie and it was kind of eerie too because it sneaks up on you.

Nerd Report: Did you know James Roday before Gravy?

Paul Rodriguez: No, but I was a fan of Psych. I watched his show. I didn’t even know he was Latino but that’s what I found out. It was cool. The name Roday doesn’t sound Latino but he confessed he was so I’ll take his word for it.

Nerd Report: Did you audition for him?

Paul Rodriguez: Yeah, I did. I read but he pretty much told me that he had me in mind for it. I wish he would’ve told me that before. I wouldn’t have been so nervous, but he did look at other people, but I got lucky and got the part.

Nerd Report: You still get nervous at this stage?

Paul Rodriguez: Oh yeah, always. I’m a wreck. I’m surprised I can go in front of an audience. I get up there and I do it anyways. Once I’m up on stage, I’m all right but auditions are terrible. I’ve taken a couple of classes and worked with a coach. I know the parts backwards and forward, but once I get in that room, it’s terrible. I’ve messed up several opportunities. I wish I could control my nerves, but it is what it is. I’m lucky to get what I get and I just try to do the best I can.

Nerd Report: So you did get to improv in Gravy?

Paul Rodriguez: I wouldn’t say a lot. I wasn’t there that long but he did allow a certain amount of levity. He put people in the movie that aren’t known for being comedians, but I did get a lot of laughs out of them. A lot of that wasn’t in the script. It just came off on the set. I was really impressed by Gabby. She was amazing, very calm and professional, like she’d been doing this all her life. I was really impressed with her work and it was fun knowing her.

Nerd Report: Who else did you get along really well with?

Paul Rodriguez: Just about everyone I had a chance to work with. I was impressed that a big theater star was in it, Sutton Foster. I remember seeing her on Sesame Street. She was very nice to work with.

Nerd Report: You’ve been in movies for a long time, probably since you started standup. Has the industry changed a lot?

Paul Rodriguez: Well, it’s a lot harder to stay viable. There’s not a lot of parts being written for a 60-year-old Latino. But I’ve been very fortunate. I just finished doing a couple movies in Mexico. This’ll be my 40th picture. I’ve done about 40 pictures. I’ve been very fortunate because it was never my intention to be in the movies or be a movie star. My goal was always standup. It was always to do standup. You do all these other things so that you have a name so that people will buy a ticket to come see you at a nightclub. That’s still my only goal. I’m not trying to win any kind of award. I’m truthful with myself but it’s fun to be able to work with the people I’ve been able to work with. I got an opportunity to hang out with Clint Eastwood. It’s been a fantasy for me really. When I read for these parts and I don’t get them, I’m not disappointed. I’m sure they got somebody better. But when I get the part, I’m thrilled to death. It’s a win-win for me. As long as I can continue to do my standup, that’s my only goal. That’s really what I started out to do and I’m going to keep doing it. I’ll be doing standup until I can’t stand up no more.

Nerd Report: They gave you your own movie, A Million to Juan. Was that a good experience?

Paul Rodriguez: Yeah, that’s my favorite. I directed that. It was a good experience and it also told me that I didn’t want to direct anymore. It’s such a hard and difficult [job], like babysitting a bunch of adults. I’m not cut out for that, although A Million to Juan was very successful. Every once in a while I see it on TV and I’m happy. It was done on a shoestring budget and if I ever direct again, it’ll be a surprise to me. If I ever do that, it’ll probably be a stand-up movie.

Nerd Report: What is your material about these days?

Paul Rodriguez: Well, you know, I’m older and it’s a little more career focused. It’s a little more things I’ve done and things that I’ve learned as you grow older. My material basically doesn’t have a message or a philosophy. It’s just minutiae. I talk about how I dress, getting old, going to the doctor, Obamacare, that sort of thing. Right now I’m currently on my Fifty Shades of Brown tour. I’m a lothario on a budget. Basically nothing earth shaking but the audiences seem to laugh and I’m pretty well booked.

Nerd Report: Has social media changed the way you do comedy?

Paul Rodriguez: It has. Social media has become the pawn shop for your comedy. It used to be in my day you could work on five, 20, 30 minutes of material and take it around the country. Now, you get on stage somewhere, that thing’ll be on the web before you get home. So it’s forced you to ad lib a lot. It’s forced you to turn out more material to try to stand out from the crowd. In my particular case, when I was around, there were very few Latino standups. Now there’s a lot of them, a lot of very good ones. So we’re all in there talking to each other, find out what market you haven’t been in. Trying to find some audiences that will come and see you because it’s not easy.

Nerd Report: Were you a horror fan before Gravy?

Paul Rodriguez: Oh yeah. It wasn’t my particular genre. I love comedies, but like everybody else, I watched The Blair Witch Project and The Exorcist. It’s not my particular favorite but I was surprised what a big fan base it does have. All these websites and these directors who make these movies. When I grew up in Compton, I just had to open my door and I would see horror. I didn’t have to go to the theater, but to each his own.

Nerd Report: How did they do the special effect with the arrow?

Paul Rodriguez: That was a couple hours of makeup. They would put the protruding part of the arrow on my back and sometimes it would fall off and they’d have to glue it back on. You’d have to stay there for hours with your jaw open. My jaw was in pain. I sympathize with someone who has to do that, but my jaw didn’t open that wide and I had to have that apple in there. Overall, you do what you’ve got to do. It was fun, they paid me well and what can I tell you? I couldn’t complain about something they could’ve gotten 100 other guys who would’ve loved to do that.

Nerd Report: Were you happy with the way it looked?

Paul Rodriguez: I was happy with it. What I love about this movie is a lot of people that are in it are very recognizable, so you don’t think it’s a horror movie. It’s a coming of age movie. It’s a Ridgemont High kind of thing. Then as it progresses, it gets darker and darker. These are well dressed yuppies who are playing a game with our lives. It slowly starts to dawn hopefully on the audience that this isn’t a comedy, that nobody’s going to break into jokes. I played it like I’m running this restaurant and I’m being robbed. This happened before, I don’t think it’s too serious. As it progresses, they don’t want me to fix them any food. We are on the menu. 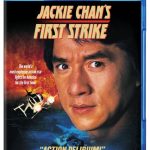