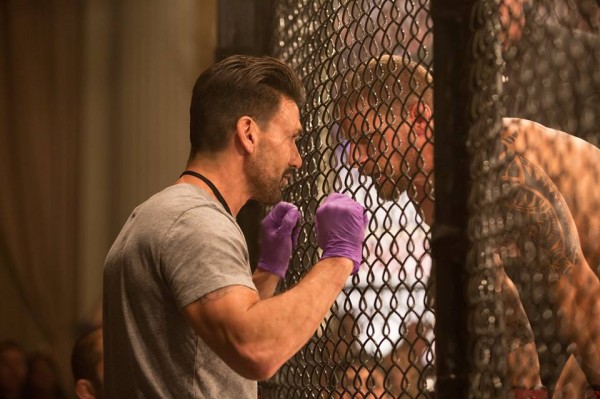 DirecTV’s original series Kingdom enters its second season this week. When the cast and creators met the Television Critics Association over the summer, they revealed that season two will see a female fighter enter the gym. This on top of all the drama already in motion between Alvey Kulina (Frank Grillo), his partner and girlfriend Lisa (Kiele Sanchez), her ex and Alvey’s fighter Ryan Wheeler (Matt Lauria) and Alvey’s own kids.

After the TCA panel, Nerd Report got some one on one time with Grillo. On a full day of interviews, I already knew Grillo had worked out that morning, which is more than I could say. He even discussed a 5:30AM sparring session on his TCA panel. We discussed one episode of Kingdom that actually scared me away from the gym. New episodes of Kingdom air Wednesdays at 9 on DirecTV’s Audience Network.

Nerd Report: How does Alvey approach a female fighter?

Frank Grillo: I think the same way, really. He looks at her as far as skill set and what he can do to improve it, and where, if there’s a ceiling to her talent, or this is somebody who could really be a Ronda Rousey. I think Alvey is in a sense a bit more old school than everybody else. She’s still a woman and is there really a place for a woman or is it me just saying, “Okay, I guess if they’re going to let women fight, I might as well get involved” type of thing? It’s going to be interesting to see when Alvey finds out about Nate, what the audience already knows. He’s kind of an old school, I say it often, like a neanderthal when it comes to these kinds of things. It’s great. It’s set up for a lot of story.

Nerd Report: Is the MMA world still a little behind on sexuality?

Frank Grillo: Yes, amazingly so. Probably more than any other sport.

Nerd Report: That seems odd, being such a trailblazing sport of the new millennium.

Frank Grillo: Well, I think sexuality in sport in general is still taboo. I really do. We talk about it more and there’ve been one or two high profile athletes that have come out, but I think as far as the fight world, as far as boxing or MMA, I just think it’s in the dark ages as far as sexuality. That’s why Nick Jonas is taking on this responsibility wonderfully and wholeheartedly. He’s committed to doing something that’s never been done before, because it’s not going to be an easy coming out. It’s difficult, it’s violent, it’s graphic and we haven’t seen that. We really haven’t seen that.

Nerd Report: Did you have to question last season how a trainer could leave his fighter so soon before a fight?

Frank Grillo: Yeah, you get involved in things in your personal aspect of your life that sometimes is just bigger than what you’re doing professionally. So I think Alvey’s always on the cusp of really unwinding and f***ing it all up. You’ll see that in the next 10 episodes because he goes down a path that is not the healthiest.

Nerd Report: I’m always impressed by how much everyone trains, and hearing about you going in at 5:30 AM makes me feel guilty that I don’t do that. But when I saw the “Cut Day” episode, I thought that’s so crazy, I’m not even going to try to go there. Could that episode actually scare people away from the gym?

Frank Grillo: No, most people say, and I hear it a lot, whether it’s on Twitter or whatever, they go, “You’ve inspired me today.” A lot of time I’ll say, “Just left the gym, did 18 rounds” and you go, “I’m getting to the gym today. You’ve inspired me. I should be doing more.” Or “I should start working out.” It’s never, “Oh my God, that looks so hard, I’m not going to do it. It’s too much.” I think people need to be motivated. I certainly do. I’m not motivated necessarily by other people working out, but I’m motivated by things in my brain or things that I see that make me want to stay in a certain kind of shape. By the way, because of that, because of that psychosis that I have, and it is a psychosis, there’s a reason why I’ve gotten these roles, these physical roles, getting these movies where I get to be this badass. I couldn’t do that if I wasn’t mentally intuned with my physicality because you carry yourself a certain way. So it’s actually paid off later on in life for me.

Nerd Report: Except for certain dramatic narrative foibles, is Alvey the character you’ve played who’s most like yourself?

Frank Grillo: Yeah, because I’ve had a chance to let him unfold and see him develop. He is not that far from me. Not that it’s not a lot of work to prepare and create a character, because he’s still a character. He’s not me, but there’s a lot of me in Alvey. If I didn’t have a wife and three children, who knows? I came from a rough and tumble place so I can talk like that, I can walk like that and I can do all that stuff. A lot of the characters, The Grey and all these guys, are kind of parts of who I am. Or if society wasn’t the way it is, maybe I would be those guys.

Nerd Report: You’ve had a lot of success, especially with Marvel and The Purge, but is Kingdom something that feels like it’s yours?

Frank Grillo: No, Kingdom is a complete ensemble. It really is. I think because of the character, I think it rolls down from Alvey, but this is a true ensemble. There’s no doubt about that.

Nerd Report: After the climactic fight in season one, where does Alvey take Wheeler next?

Frank Grillo: Well, you pick it up six months later. Alvey’s had some success. We’re not tethered to the last episode of the season which I love. Alvey’s got some success. He’s got a new gym, he’s got a new truck. He’s spending money and he’s got more fighters that bring him bigger purses and stuff. The thing that he got that he wanted so bad in the first season, which was success and for the gym to be okay, has kind of now turned on him a bit. It was at the expense of relationship and I think what we do is we see Alvey revert back to old behavior that is just so detrimental to him. You see a guy kind of come undone a bit.

Nerd Report: Is it fun to play stuff that you’d heard about as Alvey’s backstory in the first season?

Frank Grillo: Yeah, it is. It really is fun to do that and it really completes the character for me. There’s a freedom to it too so I am so blessed and grateful to have been cast in this show.

Nerd Report: Are you able to think a little bit further ahead since you got a 20 episode order?

Frank Grillo: Yeah, and you know what’s great about it is you discover stuff midway through the first 10. We started to discover stuff that we thought, “This would be interesting to explore in the back half.” I’d sit down with [Kingdom creator] Byron [Belasco] and go, “I got an idea for something. Tell me what you think.” And he’d say, “I like it. Let me write something up. Let’s see if we can figure it out.” It’s cool to be able to engineer it that way. 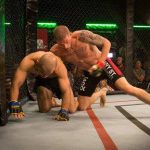