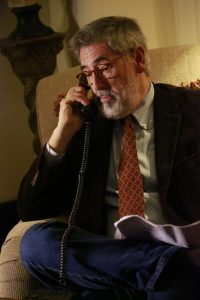 Screamfest 2015 kicked off with Tales of Halloween, a collection of 11 horror shorts from 11 different directing teams. Everyone is going to have their favorite stories out of the 11, but even if you don’t love them all, I loved seven out of the 11 which is a pretty solid ratio. Even of the other four, none of them are bad. There’s just the ones you’re hoping are shorter than the ones you like more.

You find that when a short is building up to a big twist, the buildup is pretty boring because the twist is all they have. When the initial idea is already clever, then the whole piece is fun, and even then they have a twist. 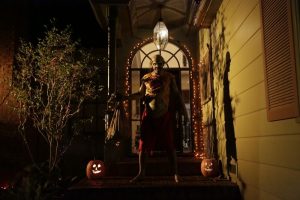 I’ll single out Dave Parker’s Sweet Tooth for creating a new monster mythology that plays with children’s wish fulfillment and feelings of parental betrayal. Darren Lynn Bousman’s The Night Billy Raised Hell has wildly inappropriate violence committed presumably by a child, and it thumbs its nose at that taboo with glee.  Adam Gierasch’s Trick is a full on siege. It’s vicious but inherently irreverent because of the attackers. Mike Mendez’s Friday the 31st is already a loving homage to slasher movies, and then it goes nuts. 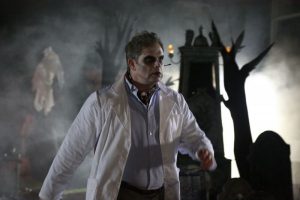 The premise is that these stories are loosely connected. The voice of Adrienne Barbeau as a radio DJ is heard over several of the stories. Night of the Living Dead is playing on TV in more than one. The bigger interconnections are revealed more towards the last few stories. It’s cool that it works either way. They don’t need to be connected to enjoy the individual stories, and it’s unobtrusive when the connections are revealed.

At film festivals, short films often play in blocks anyway, and those blocks can be more exhausting than a single feature. Mainly because most shorts are too long, but also because you’re going through so many complete narratives, watching seven in a row is just too much. Yet 11 in 90 minutes is no problem. Even though each story in Tales of Halloween has a unique tone and theme, it helps that they are connected and organized as a single entity, like an album.