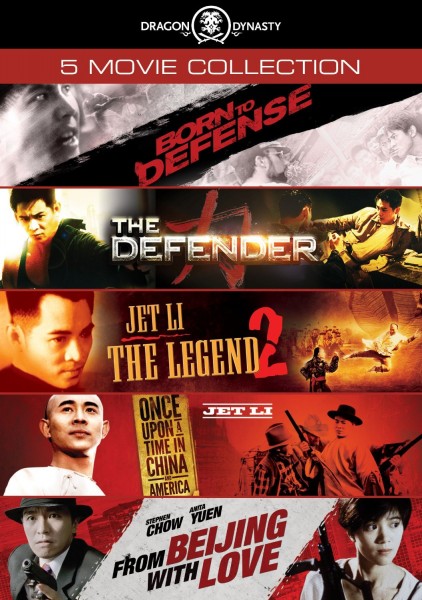 One of the bittersweet joys of discovering Hong Kong cinema in the ‘90s was trying to find movies on VHS, which usually meant cropped badly with the subtitles cut off, or just invisible white lettering on white background. DVD changed that when films were at least presented in the proper aspect ratio with electronic subtitles, but you still had to find a retailer, most likely online, that had region one or region free DVDs.

Dragon Dynasty has made that even easier by releasing films in the U.S. Their latest five pack includes four Jet Li movies and a Stephen Chow one. I went for the iTunes digital downloads, which unfortunately are only dubbed, but the dubbing is reasonable and sounds like the voiceover actors are trying to capture the same inflection and tone as the original actors. DVDs presumably have original language options as other Dragon Dynasty releases have. Considering I last saw Once Upon a Time in China and America with subtitles way out of sync, at least I could be sure I’m hearing the words that are being spoken at the right time. The films all have clean prints that are on the high end of DVD quality, even in the digital format.

I was sure they would release Once Upon a Time in China and America straight to video as Shanghai Noon 3, but I guess they’re still holding out hope to get Jackie Chan and Owen Wilson back for a legitimate sequel. The fifth in this Wong Fei-Hung series, and Jet Li’s return after one film away, is a martial arts western made three years before Chan’s. Directed by Sammo Hung, it has a good mix of Kung Fu and gunfights.

Born to Defense is the only film Li directed, and he is very self-critical of it. It certainly has a scrappy quality, but it’s also got a young, angry Jet Li going to town on racist American soldiers.

The Defender, aka Bodyguard from Beijing, is from that golden era of Hong Kong cinema from the mid ‘80s to mid ‘90s where they were mimicking modern day Hollywood movies, but with their acrobatic moves and insane stunts. The climax is relentless.

From Beijing with Love is Stephen Chow’s spoof of James Bond movies. This is before he started using visual effects in Shaolin Soccer and Kung Fu Hustle, so it’s just straight action comedy. There are some fun digs at gadgets and girls.

The Dragon Dynasty 5 Movie Collection is available now on DVD and digital.