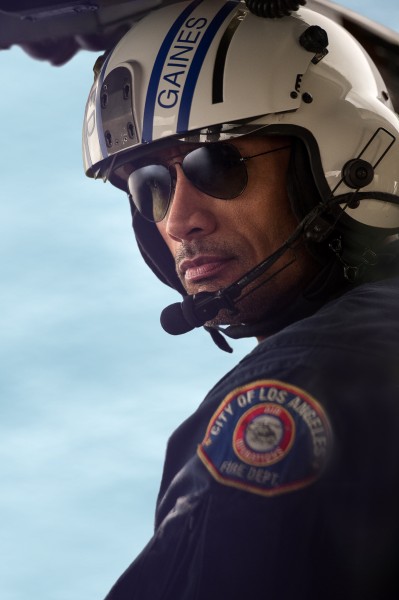 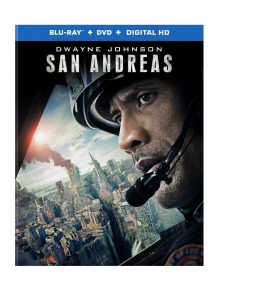 I saw San Andreas in 4DX, the new premium experience that involves motion and sensory elements. This is what I dreamed about when I was a kid on the Back to the Future ride, seeing an entire movie that made you part of it. As an adult, I’d worry that the movie then becomes a theme park ride and the film itself is irrelevant. No, it is a complete, coordinated experiences that enhances the movie with sensory effects, and enhances the generic shaky seats with a narrative that gives meaning to the ride.

From the moment the seats subtly swayed as the helicopter flew the camera over the mountains, I felt like there was something to this 4DX. This is motion coordinated with the movement of the camera. Oh, it’s bombastic, and when it sprays you with mist or scented smoke billows up, those are theme park gags, but they’re the kind of theme park gags you appreciate when executed creatively. This is a careful balance, because too much water would be annoying, or a possible health risk. It is a triumph that it’s just enough mist to give you joy that there’s a sprinkle when there’s a water scene. Part of it is the communal experience too. Watching the entire theater tilt in unison is more thrilling than being in a single shaking De Lorean.

And I was worried that just watching these sequences without feeling the tilting, shaking, spraying or air blowing around your head would be flat and generic. San Andreas has enough old school suspense sequences to assure me that it is a well crafted thrill ride in 2D as well. In particular, a collapsing car rescue shows creative build, and the fact that a tsunami is not the biggest obstacle in a tsunami sequence shows screenwriter Carlton Cuse worked overtime to provide some clever disasters.

San Andreas definitely follows the 10 minute rule, where something awesome has to happen every 10 minutes. Only it’s not even 10 minutes apart. It’s probably not even five, but we’ll find out for sure when we get the Blu-ray and time the talking parts between disasters. The only time it really takes 10 minutes is an emotional section in the middle, and it’s a good one. It’s about families dealing with grief and how they can potentially heal.

Part of the joy of disaster movies is the glorious melodrama, and San Andreas has it. There’s a raging A-hole who Cuse and director Brad Peyton know just what to do with. There’s a sense of community that manifests in survival comrades trading stolen vehicles for each other’s stolen vehicles. It’s equhnal opportunity heroism because the girls save the boys just as often as vice versa. I loved the scene with the looters, because it’s going to take a lot more than looters to stop The Rock.

The science is mostly sincere, in an overwrought cranked to 11 way like it should be. At least they don’t dismiss it as “the size of Texas.” Scientists actually develop a technology to predict earthquakes, and prove it works. Then they complain that nobody listened to them. You mean, since yesterday when you discovered it? Nobody heeded your warning in the last 24 hours since this technology has existed? So these aren’t the long ignored scientists. More like they beat the Twister tornado chasers to perfecting their technology, so let’s give science their credit while we enjoy The Rock saving the day.

Let me be clear. The movie’s commitment to science is part of what makes San Andreas awesome, but it is not actually the tribute to science it thinks it is. Someone knew they still had to make a summer movie. A real earthquake would not do damage in carefully choreographed awesome ways. That’s why real earthquakes are scary and movie earthquakes are awesome. But the people in the movie believe it would, and we love them for it.

San Andreas is awesome and I am sold on 4DX. The experience would really be complete if the 3D actually stuck out of the screen, but I guess we’re not there yet. I liked it so much I went back to see Mad Max: Fury Road in 4DX, but it wasn’t as good. I think because so much of San Andreas is aerial, it compliments the experience better than the road. I also imagine Peyton and co. designed San Andreas more specifically for 4DX, while George Miller just made a movie and someone did the 4DX later. So it will depend how each movie is designed for 4DX, but San Andreas is a great time at the movies and the perfect opportunity to try out a new format and see if you agree 4DX is worth leaving your house for.

Now, the Blu-ray is not in 4DX, but until they start building 4DX home theaters, Blu-ray is 4DX for your eyes. The picture is so perfectly sharp that all the epic and aerial disaster sequences take your eyes on a journey up the coast as it crumbles. The detail of all the destruction shots holds up but doesn’t draw attention to itself so it feels like you’re really watching Los Angeles fall.

Bonus features emphasize how much of the film’s action was created practically, and you can see specifically where it is handed off to visual effects. Peyton keeps his commentary moving, a self-professed commentary geek, detailing how ever sequence was put together. Four minutes of deleted scenes are unextraordinary trims, so don’t expect a San Andreas director’s cut. For a fun movie looking great and behind the scenes practical stuns, San Andreas lives on well on Blu-ray.