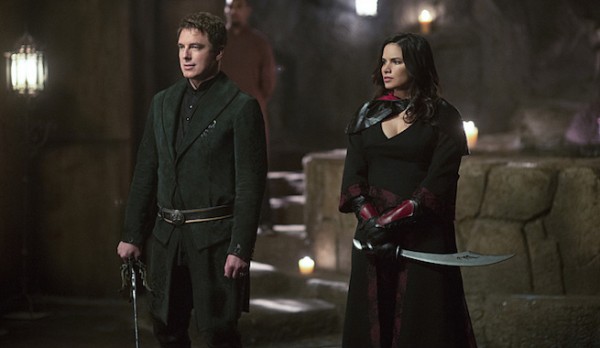 A lot goes down in this episode of Arrow,  so lets cut right to the good stuff first. The word restoration applies in both the main plots. Sarah’s withered corpse needs to be restored to life, and the Ollie/Dig bromance needs a reboot after the events of last season. If you remember, Oliver kidnapped Diggle’s wife and held her hostage, leaving baby Sarah home alone. Oliver’s ready to hug it out, but Diggle’s not looking to forgive and forget.

Laurel and Thea told everyone they were going on a spa vacation. But they’re really in Nanda Parbat trying to resolve a few things. Thea needs a cure for her rage attacks. And Laurel wants her long-dead sister brought back to life, via the Lazarus Pit. Is that too much to ask of Malcolm, now that he’s in charge? Apparently so, because he tells Thea he can’t help her, and he tells Laurel he won’t help her.

Oliver, Diggle and Felicity are back in Star City, fighting crime on their own. Just like back in the old days. But because Oliver and Diggle are feuding, they aren’t working as a team. That almost gets both of them killed, and Felicity is definitely not happy about that. There’s a new bad guy in town and he’s DC’s version of Gambit. His weapons of choice are deadly razor sharp playing cards.   He has them tattooed all over his body, and because he’s a meta-human, he can peel them off and fling them like knives or throwing stars. They don’t explode, but they can and do kill.

Back in Flashback land, Oliver has successfully infiltrated Baron Reiter’s operation on the island (Lian Yu).   Which was all part of Amanda Waller’s plan. The bad guys are harvesting a hybrid plant that is used to produce a drug they call ‘ Slam.” To save a man’s life, Oliver has to use torture. And while it did save his life, he wasn’t that happy about it. Oliver ends up blowing his cover though, to rescue an attractive female worker the bad guys want killed. So what next?

Diggle finds Mina Fayad, the woman that put the hit out on his brother. But before he can get any answers, Damien Dark arranges her death. Double Down, the card throwing meta-human deals her the fetal hand.  Diggle and Oliver work together to find and catch Double Down. But when he tries to kill Diggle, Oliver takes the fatal card instead. (He survives.) But it’s enough to prove that Oliver’s still a friend, and the two dudes make up. And they send Double Down away to a meta-human prison.

Back in Nanda Parbat, Malcolm sends Ninja’s in to attack Thea, and she kills them. Apparently that’s the only temp cure for her bloodlust, real blood. And Thea’s not too happy about that. And despite nay-saying Nyssa, Malcolm caves and dunks Sarah’s body in the Lazarus Pit. It works. Sarah’s alive, but she’s more of a raging animal than a loving sister. And as a dig against Malcolm, for using the Pit on Sarah when she didn’t want him to, Nyssa destroys it. Stay tuned.