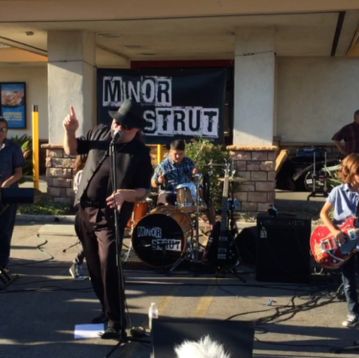 One of the special events on Wednesday, October 21, 2015 was the Million McFly March (Visit the link to donate to Team Fox), put on by Stolen Dress Entertainment at the Burger King on Victory Blvd. in Burbank where Marty Mcfly skateboards to school in Back to the Future. Of course, the day is significantly the day Doc and Marty arrived in the year 2015.

From 9AM until well past five, people arrived in costume just to hang out with other Back to the Future fans. At 3:30 we were treated to a performance by the band Minor Strut, whose median age is 11, and at 4:29, they were joined by Mark Campbell. Don’t worry if you don’t know the name. Campbell sings with the band Jack Mack and the Heart Attack but provided the singing voice of Marty for Johnny B. Goode.

After Campbell and Minor Strut rocked the parking lot at 4:29, around 4:32 or so I interviewed Campbell about his work on the series. The Johnny B. Goode scene was a landmark that was repeated in Back to the Future Part II, and the song was on the soundtrack credited to Marty McFly, as was the MTV music video. The real story has been known for some time, but this was a special opportunity to go back in time with Mark Campbell.

Franchise Fred: Did you do the prerecord before they shot the performance?

Mark Campbell: Yeah, that was one of the coolest things about Mr. Fox saying, “No, you guys find somebody that can actually sing the song and I’ll be more than happy to lip sync to it.” Bones Howe, the music director on this movie, told me that up front. The only suggestion he made to me after listening to me sing it a couple times with all the guys, Tim May and everybody on the track, was, “Okay, you’re from New Orleans. This guy, we don’t know exactly where exactly he’s from.”

Mark Campbell: Yeah, but he was thinking he might be from Ohio. “Region it up a little bit to make it more generic.” And I was like oh, okay. We did that. Since I’m a few years older than Michael anyway, it was like youthing it up, energizing it up just a tad. That was all I knew about it and the rest was it’s Johnny B. Goode by Chuck Berry and everybody knows it, or should by that time.

Franchise Fred: When they did the sequel, did you re-record or did they use the original tracks?

Mark Campbell: They looped what they did in the first movie, Back to the Future, for the second one. Then I was brought in to do overdubs during the dance scene in the saloon when he’s dancing like Michael Jackson, and the “Hoo!” and all that stuff.

Franchise Fred: So you worked on Back to the Future Part III also?

Mark Campbell: Yeah, I’m in all three but the second one was looped from the first one. I didn’t actually go back in. The third one I went back in to do those little things, more like what Michael would sound like if he was moving around, trying to get out of Biff’s way shooting at his feet. Then the “hoo!” where he jumps up and hits the spittoon that lands on Biff’s head. Yeah, I was in all three.

Franchise Fred: The first movie comes out, the soundtrack comes out. At what point did you realize this was huge?

Mark Campbell: From the gate because I knew this. I’m in the band Jack Mack and the Heart Attack and we’re really good friends with Huey Lewis and the News. I was told up front that Power of Love and Back in Time were only going to be on this soundtrack. They weren’t going to be on a Huey Lewis album. So if you were a fan of Huey’s back in the ‘80s, which a lot of people were, you had to buy this soundtrack. Bones Howe put it in his heart to give me a very small piece, but a very nice piece of the percentages of the soundtrack because I went into it knowing I’m not going to get credit. They want to keep the mystique that it’s Michael singing and I was all good with that. I did get a special thanks credit at the end, Mark Campbell, my name’s right there. I was happy with that but Bones didn’t really like that. He was like, “You should get more than that.” So he made sure I got my gold album and also that I got a very small piece of the soundtrack, so every time I run into Huey I do the same thing. “Thank you, thank you, thank you for putting those songs on that album” because it went through the roof. Before there were fans to Back to the Future, there were Huey Lewis fans and the only way you could get those two songs was to buy that soundtrack.

Franchise Fred: That’s amazing because I remember the MTV video said Marty McFly. On the soundtrack it says Marty McFly.

Mark Campbell: And I understood. It was keeping the mystique of Michael. As a matter of fact, I always tell a story when my mother flew out from New Orleans. We just for the fun of it went down, because it had just come out, and we went down to Westwood. She sat next to me and there was a young couple in front of us. I was so wrapped up in the movie that I was watching it going, “Oh yeah, here I come. This is my part.” Because I was so into the story. Then when he hits the screen in that whole scene that we all know and love, these two kids, one turned to the other and went, “I didn’t know he could sing.” And I promise you, the thrill that I got was like, “We did it. We did our job” because people were believing that was him. I understood. He’s not going to go out there and go, “No, no, no, this guy named Mark Campbell from Jack Mack.” He’s not going to do that. I didn’t expect him to do that. It’s the mystique, for years and years and years. Finally, about seven or eight years later, it broke on different YouTube things that started coming out when that technology, online research and all of you wonderful Back to the Future lovers started finding out things like that.

Franchise Fred: Now that people know, how often are you asked to do Johnny B. Goode?

Mark Campbell: You know, I haven’t in a long, long time simply because it kind of gets away, but as anniversaries come up, as a matter of fact, the last time I did it with Tim May, was in front of a 62 piece orchestra at Seth MacFarlane’s private party up in the hills. They had the whole orchestra and they were showing footage from behind. He does theme parties and they had us do Johnny B. Goode together. That was the last time I saw Tim. I’d like to see him.