Here’s a movie that was made for seven-year-old me. If you could have told me I could one day see Pac Man, Donkey Kong and to a lesser extent Centipede and Galaga re-enacted by A-list movie stars, I would have given you all my money. Now the joke’s on you. I see movies for free. My seven-year-old self was still sophisticated enough to know the script isn’t as strong as the concept and visuals, but it’s good enough to justify experiencing the live action ‘80s coin-ops.

Pixels actually breezes through the introductions efficiently and entertainingly with appropriate Adam Sandler levels of ‘80s nostalgia. We’re introduced to the characters as kids, the rules of the various video games for newbs, and their eventual downfall. Where Pixels gets too bogged down is in trying to give its adult comedians schtick to do in between video game scenes.

First Sam (Adam Sandler) has to meet Violet (Michelle Monaghan) and share a sincere, albeit contrived, moment so he can blow it and they can bicker through every scene of exposition in the rest of the movie. It’s tired snobs vs. slobs schtick that isn’t the heart of the movie so they couldn’t even do it justice if they were truly committed to the snob/slob paradigm. It’s not painful, it’s just not good, and certainly doesn’t warrant taking up time from the awesome video games. It just makes the exposition take longer. We get it, the light guns defeat the pixel aliens because science. Just get on with it without the pedestrian insult comedy.

But, we get to see three dimensional Donkey Kong, even if it’s just actors on a green screen stage with a red floor, and maybe some actual blue ladders. And the conclusion is based on a willful lack of knowledge about how you win a game of Donkey Kong, but it’s artistic license and they’re running from barrels and grabbing hammers. The Pac-Man sequence makes good use of the rules of Pac-Man to create momentum and suspect. Yet there’s surprisingly little sense of geography, even given the Pac-Man board.

There isn’t a lot in the way of awe and wonder. One effective shot lets us see Galaga reflected in a helmet, but there’s more in the modern style of just show everything full on. The Centipede scene is a little clunky, as if it was just Sandler stepping up green stairs which later became mushrooms. That scene is mainly Sandler and Josh Gad standing around shooting guns in the air, but at least they let one monster break loose and interact with civilians.

Incorporating the three lives you’d get in an arcade game was a great structure for the video game invasion, and it ramps up the suspense when two lives are down. One ‘80s classic plays a major role and hasn’t been spoiled in the trailers, so good on that.

Some unexpected visual effects include Forrest Gumping some ‘80s videos to speak for the aliens. It’s well done, looks more natural than the 1994 Zemeckis movie, and they can speak for much longer but I’m not sure there’s an actual reason for going to all this trouble.

The film is fairly inconsistent with the rules it sets up, but are we really going to be sticklers over Pixels? We should be, I know, but I’m not surprised. I’m not sure I’m comfortable with the blonde fantasy warrior from a video game they made up who doesn’t speak and only exists to be Ludlow’s dream girl. Then Jane Krakowski plays Kevin James’ wife in what must be the live action re-enactment of that one line from 30 Rock (Season 7, episode 3, “Stride of Pride” or Google “Jenna Maroney Kevin James wife.”)

The most bittersweet quality of Pixels is that it’s afraid to be a smart movie about video games. Even as a video game nerd, Sandler has to keep assuring us he’s the cool dumb guy. Wouldn’t it suck to be smart? They never miss an opportunity to make fun of someone for being too smart and knowing what words mean and stuff. Bright side, there’s still a live-action video game movie for smart gaming satirists to make. For now, here’s an excuse to see the money shots.

Pixels looks great on Blu-ray. Picture clarity and color isn’t really a problem. The standout scenes are of course the set pieces, where the pixelated enemies glow in bright Pac-Man yellow or Centipede green.

Bonus features are brief behind the scenes featurettes on the making of each sequence. Seeing the green screen set of the Donkey Kong scene confirms my suspicion about how that was done. I was not able to get the cell phone game to work. I downloaded it and it kept trying to sync with the movie but never could. That’s a bummer, because that seemed like the most fun you could have watching Pixels, getting to play along. 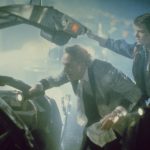