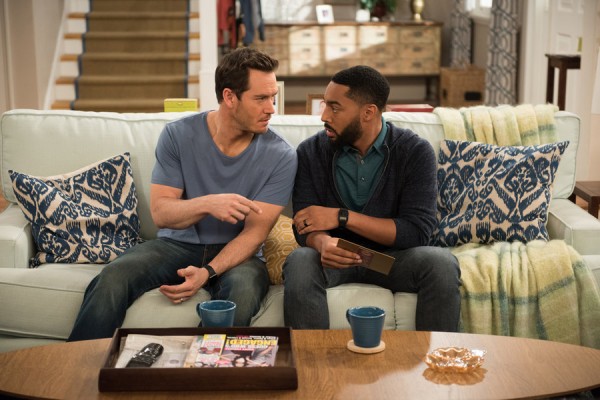 NBC’s newest comedy is Truth Be Told, starring Tone Bell and Mark-Paul Gosselaar as two married men navigating relationships. I ran into Bell at the NBC party for the Television Critics Association and got a quick interview over hors d’oeuvres about the new show. Truth Be Told airs Friday nights at 8:30 on NBC.

Nerd Report: Were you looking to do television?

Tone Bell: I was playing it by ear, man. I kind of lucked up on a deal with NBC my first year in LA and I’ve been riding ever since. It’s been a really nice ride. NBC’s taken care of me over the last couple years.

Nerd Report: Is Truth Be Told based on the comedy of Tone Bell?

Tone Bell: My character is based on a couple friends of DJ Nash who was the creator of the show, but as we go along, he’s been very gracious enough to let me put my two cents in on the style of jokes I do, the stories I tell, what I think is funny and bleeds into what he already has ideas on. It’s been real nice. It’s a really fun show about these two couples, best friends, who don’t have rules but they have questions.

Nerd Report: Who represents DJ on the show?

Tone Bell: DJ Nash is Mitch who is played by Mark-Paul Gosselaar. Very high strung, neurotic, very exhausting friend but does it because he loves people and wants everybody to get along.

Nerd Report: Who is Russell?

Tone Bell: Slightly younger. Mitch was a member at his wedding, not in the wedding, but they just become best friends and Mitch ended up moving next to Russell. Now the two best friends live next door to each other. He’s a “why” guy. He always has to find out the answer. He needs the justice of it. He needs to figure out why things are the way they are, whereas Russell is a why not guy so I do it for the story because I want to put it on stage. Just the dynamic about the yin yang is really fun. Russell Logan is actually not too far from who I am in real life to be honest with you. He’s a standup comedian, actor, writer, six months married, lives in Sherman Oaks, CA, a little bit of success.

Nerd Report: Are Russell and Angie still in the honeymoon phase?

Tone Bell: I think we’re still in the honeymoon phase but I do think in a few episodes, there’ll be a down tic and we’ll have to ask our married for 10 years [friends’] advice on how to keep the sparks alive and the fire brewing.

Nerd Report: What makes this perspective on relationships different?

Tone Bell: We dig into the past of Russell quite a bit on who he’s dated. He’s played around, he’s had a little bit of Hollywood success. He’s not a star but he’s a working actor. At least commercially, and he travels. So he’s had some fun out there in the world and now he’s having to stay at home as a one woman man. His past comes back to haunt us a little bit, but they have single friends. There’s a couple across the street who has five kids. There’s a gay couple down the street. There’s roommates down the street so we get a little bit of everything in the neighborhood.

Tone Bell: Being a standup and that being, if I’m not doing television, mostly my professional career, I think standup is back. We took a lull for a little while, like early 2000s and now TV is ready to see comics again. People come to clubs and I think Last Comic Standing is a great platform for NBC.