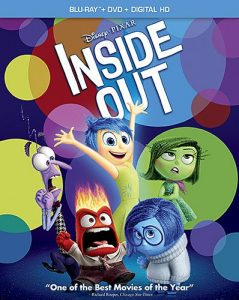 Pixar has finally fulfilled my dream of a big budget Herman’s Head movie. I know Inside Out is a completely original idea, highly sophisticated and emotional. You just can’t achieve that in 22 minutes on network prime time, but if anyone was going to do the nostalgic reboot with all the cinematic resources we have today, there’s a chance Pete Docter is that man. 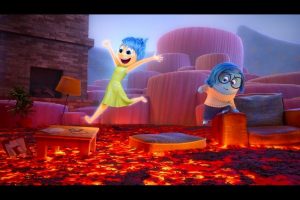 The classic Pixar movies excelled at creating worlds within our own world, the toys that come to life, the monsters in our closet, even the superheroes in our midst. It was Cars that first explored a world that was not our own, unless you believe the sentient automotive apocalypse theory which is totally valid. Inside Out feels like a Pixar classic though, creating a whole wonderland within our own minds.

You could read Sadness (Phyllis Smith) as metaphor for clinical depression. She can’t help it, she doesn’t want to feel sad, there’s no reason for her to but it’s insurmountable. To the point where anything she touches is irreversibly sad. You could read that and it will be valid and sympathetic, but that’s micro for people who can specifically relate. The macro, for everybody, is that there is a purpose for sadness, and Inside Out knows that too. 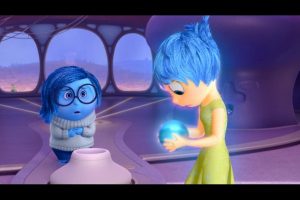 Sadness and Joy in Inside Out

While the feelings inside Riley (Kaitlyn Dias) play off each other beautifully, the story is really Joy (Amy Poehler) and Sadness getting separated. In a way it’s the Office/Parks and Rec crossover we always wanted. Their quest to restore balance to Riley’s personality takes them through a sort of Jim Henson’s Labyrinth of the mind. It’s so sophisticated how aspects of psychology and the human condition become fantastically visualized worlds to explore. Nothing is easy for them either. Inside Out makes Joy and Sadness work for it, just like the complexities of the human mind makes us work to feel calm and happy.

The triumph of Inside Out is its depiction of our complex emotional functions, but it is irreverent all the way. So it knows us intuitively, but it’s not pretentious about it. A non sequitur joke can be a hilarious tension breaker, but equally perceptive about a common human foible. 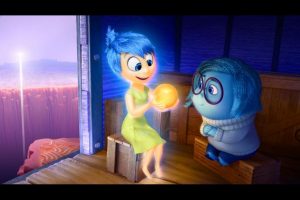 Considering how many rules the film needs to explain to set its plot in motion, the dialogue is brilliant and seamless. I didn’t even go into it in the plot summary, but Poehler delivers the bulk of it and keeps it fun.

Inside Out is an intellectual and imaginative masterpiece, but it sneaks up on you so subtly, good God is the emotion layered in there expertly. That’s a good thing. We want movies to make us feel. This is the best Pixar movie since Up.

Pixar animation always looks tremendous on Blu-ray and Inside Out is one of their most colorful. All the colors of the different emotions stand out, as do the different colors of the backgrounds in the mind. The pinkish lavender seems like a color we don’t usually see in animation, so the landscape of the mind gives it an opportunity to shine. The abstract thought sequence is particularly stunning with all the sharp lines on crisp Blu-ray.

The Blu-ray also includes a wonderful bonus feature on the women of Pixar discussing how they knew what they wanted to do, and all the naysayers they rejected along the way. It will be a very valuable piece for anyone to see, especially kids. Another behind the scenes feature discusses who they visualized each of the inner emotions.

The commentary is accessible to young listeners but more mature than most adult storytellers can articulate. Invisible storytelling is the most poignant aspect of this. Two shorts are also included, Lava which was paired with the film theatrically, and the new Riley’s First Date short which gives us a lot more time with Mom and Dad’s emotions.