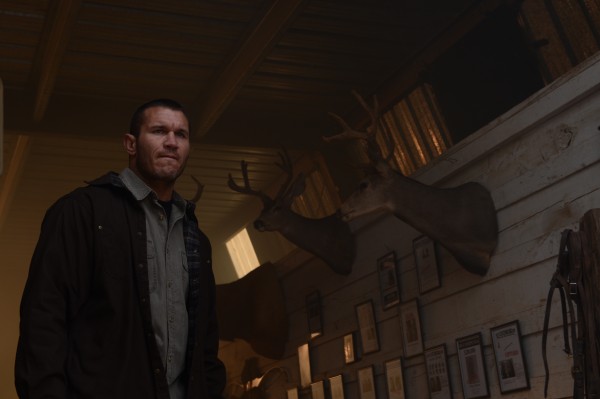 Randy Orton in The Condemned 2

WWE Studios has been continuing the series of many of their films with sequels to The Marine, See No Evil and even 12 Rounds. Now WWE Studios has produced The Condemned 2 starring WWE Superstar Randy Orton. The Condemned starred Steve Austin as a convict battling other prisoners to the death in a battle royale. Now it’s a little different.

Orton plays Will Tanner, a bounty hunter retired in disgraced. Now Tanner is drawn into a new battle for his life in an all new and updated tournament taking place in the real world. I got to speak with Orton by phone the day after Hell in a Cell to get his thoughts on the new movie and the current state of WWE. The Condemned 2 opens in theaters and VOD Friday, November 6.

Franchise Fred: My favorite WWE movie is That’s What I Am. Was that a special one for you?

Randy Orton: It was my first film. Amy Madigan and Ed Harris were in the film. I was surrounded by great actors. I think I had three scenes. He was in each one and they were pretty intricate parts to the movie. I was thrilled to be a part of that film, especially for what the whole point of the story was. Ed did such a great job. I just remember being a part of it, the whole crew, everybody, was such a welcoming first time for me. What the story was all about too and how it was good for kids and it wasn’t just a bang bang shoot ‘em up WWE film but it actually had a really good message.

Franchise Fred: How did The Condemned 2 come to you? Did you campaign for it?

Randy Orton: The way it works is they come to you with it. It wasn’t like an audition with five or 10 guys shooting for this role. It was more or less, “Hey, we think this would be good for you. You’ve got time in your WWE schedule to do it. Would you like to be in this film?” Then it goes from there. Of course I said yes and met with an acting coach, read the script over and over and started thinking about this guy, Will Tanner, and what kind of guy he would be in this movie with this story, deal with his background. I just went from there.

Franchise Fred: You said you have time, but Roel told me it was only 17 days so that’s not that much time.

Randy Orton: No, it’s not but for a WWE film it’s plenty of time.

Franchise Fred: Did you look at the original The Condemned?

Randy Orton: You don’t have to watch the first one to understand the second one. I remember when Steve [Austin] did it, probably 10 years ago, just about. They had a screening for all the guys. That was an awesome movie. This is similar but also completely different, so it’s not a continuation or anything.

Franchise Fred: Now that you’ve done a few WWE movies and the action-packed ones, how different is fighting on camera versus fighting in the ring?

Randy Orton: There’s a lot of differences and similarities. I’d say that the biggest difference is WWE, we’re live. If you mess up a part of that fight, that brawl, whatever you’re doing or if someone drops you a little wrong or punches your teeth out or your shoulder dislocates, what have you, you’re still on live television. It’s one take so there’s that pressure, but I’ve been dealing with that pressure and it’s been 13-14 years now, so I’m really used to that way of doing things with the physicality. On the movie set, it’s so much different in that aspect because it’s take after take, angle after angle, a wide shot or a master shot and then go in and pick up little parts. So it might take eight hours to film a 90 second fight scene. I’d say that’s the biggest difference. They’re similar in the sense that you’re throwing punches and you’re working with these stuntmen who are also very good at the art of what we do in the ring in a sense. So you’re picking up things from them, just like when I started working with Sean Michaels or The Undertaker or Triple H, I picked up things from them. So you’re learning on the job. Being green, being a rookie on a movie set, having an idea of how to use my body and get the best angles, it meshes very well. The wrestling with WWE really prepares you for fighting on a movie set. It’s different as well.

Franchise Fred: Does getting the second take allow you to try something a little differently?

Franchise Fred: I think you guys never get enough credit that half of your job is public speaking. Does that give you tools for the dialogue in the movies?

Randy Orton: Oh, definitely. That as well as not only speaking in public, but being in front of a camera. That’s another thing. On Raw, on Pay-per-views, it’s live. Network specials are live so when that red light’s on, you’re reaching millions of people. On a movie set, having take after take, it’s a little easier but because it’s so close up and you’re not projecting to a crowd of people or an arena of 20,000 people, you’ve really got to bring it back and dial it down. So that’s different, but speaking in front of people, public speaking, cutting promos, doing interviews on the radio, just how you articulate, all that comes into play and helps you on a movie set as far as the acting and dialogue go, for sure.

Franchise Fred: Do you have an easy time memorizing lines from the script?

Randy Orton: Earlier in my career, I would memorize a lot of stuff. Now we have a lot more liberty in WWE. You still have a main point you have to get across. How you get to that point is up to you on how you feel your character would relay that point. In a movie, you’ve got a script supervisor right there making sure you say every and, the, but. Roel was great because I wouldn’t say everything exactly how it was written, or I would come to him before we did a scene or another take and say, “You know, it feels weird right here. How about if I say this instead.” 99% of the time, he’d say, “Try it, go ahead, let’s do it, see how it looks.” That was Roel. I don’t think all directors are like that but Roel is pretty much the only director I really know. I was very fortunate to work with him on Condemned 2 because I had that prior relationship with him filming 12 Rounds 2.

Franchise Fred: What were the most difficult stunts on The Condemned 2?

Randy Orton: A lo of pro, lot of FX, a lot of explosions. We were in Albuquerque on an Indian reservation so it was a really different kind of mud and dirt that we were working with. So all these percussions are going off and there’s mulch and dirt and sand and rocks and plants all throughout the desert that are blowing up in my face. So I’m having to run through and hit my mark. There was one time where they’re shooting at my feet and I’m running down this 200 yard straightaway, I gotta hit all these marks. But they can’t have a big orange X in the middle of the dirt because that’ll pick up on film. So I gotta use shrubs and bushes and rocks as a guideline as I’m running. There was one time where I tripped up. I didn’t know where I was but we’re shooting. These pyro guys are hundreds of yards off at a safe distance where they can’t be seen because it’s a master shot. They’re hitting these squibs on the ground. One blows up in my face and it’s not only distracting because all this sh*t’s blowing up right in your face, getting in your eyes, but I got wax in my ears because the percussion’s so loud. That’s disorienting. It’s BOOM, you get hit in the face and oh my God, I keep going, I don’t stop and then BOOM, the other one hits me in the face, then BOOM, this one. I just drop to my knees and I put my hands up, like, “Okay, let’s reload these. I need a second.” That was probably the most stressful, all this sh*t blowing up everywhere, because it happens a lot. If you’ve seen the movie, you know what I mean. The fight scenes were great too. Those are a little easier. I’m used to that kind of stuff but all the pyro and the FX stuff, the gunshots, the squibs, that was the most terrifying.

Franchise Fred: What are your thoughts on the Hell in a Cell results?

Randy Orton: I watched the pay-per-view and I was happy with both Hell in a Cell matches. Bray and Roman tore it down. Brock and Taker had a great one. It’s been a while since there’s been that much blood in a match. There’s nothing you can do. You’re in a cell. That thing’s made of metal so it’s bound to happen. I just felt like the drama in that last match was awesome. I wouldn’t have picked Undertaker to take the fall. Him losing, I wasn’t too happy with, but seeing how Taker’s doing something with the Wyatts now and how they walked off with him, I’ve never seen anything like that. So I’m very excited to see what happens tonight on Raw post Hell in a Cell.

Franchise Fred: Do you watch the pay-per-view on TV and every Raw and Smackdown when you’re not performing?

Randy Orton: When I have time. That’s what a DVR is for so when I get a couple days here and there, I’m able to go back. I gotta admit, I fast forward through some stuff. Don’t we all? But there’s a lot of guys that I like watching. I’m as big a fan as any. All the guys and gals in the locker room are. That’s why we do it. It’s fun when you don’t know what’s going to happen. Seeing Alberto Del Rio come back last night, I would’ve never thought that was going to happen but there it was. Then he got the win, he got the title. So a lot of exciting stuff like that when you don’t know what’s going on and watching it as a fan. It reminds you how much you love what you do.

Franchise Fred: What’s next for you?

Franchise Fred: Any more movies after you get back from the honeymoon?

Randy Orton: No movies in the immediate future. I love being in the ring. It’s tough, man. A lot of these guys are successful. Bautista, Rock, even John with Trainwreck. They’re coming into their own and becoming actors out in Hollywood. That might be a fantasy of mine but I think my immediate future calls for proving I still got it with all these NXT guys coming up. Proving I still got it in the ring with guys like Kevin Owens, Finn Balor, Seth Rollins, the Nevilles and all the guys coming up right now. It’s motivating because they have such a hunger for getting better. It motivates me too so that’s what I’m looking forward to in the next bit of time. The movie thing, with the WWE, every couple years, if they want me to star in a movie, I’m happy to do it. It’s a great experience and you never know what the future holds.