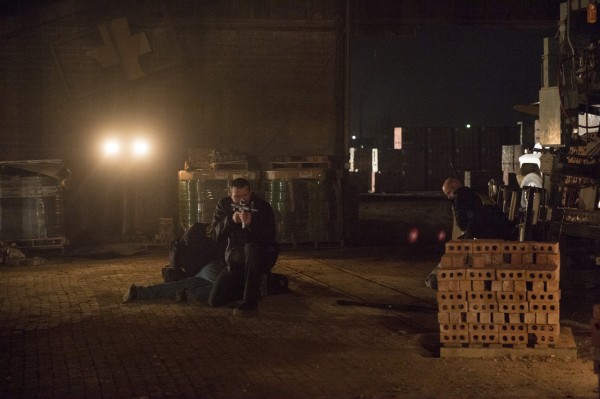 Randy Orton in The Condemned 2

My last interview for WWE Studios’ The Condemned 2 is Eric Roberts. Roberts plays Frank Tanner, the estranged father of Will Tanner (Randy Orton). While the Tanners disagree on Will’s path as a bounty hunter, Frank comes through when Will finds himself an unwilling contestant in a battle royale.

I got to speak with Roberts by phone out of Philadelphia. He had just flown in, shot for a day, worked out and then called me, as he would later explain how he keeps working so steadily. The Condemned 2 is out in theaters and VOD Friday, November 6.

Franchise Fred: Did doing The Condemned 2 with Randy Orton make you think back on Best of the Best where you were the fighter?

Eric Roberts: That actually never crossed my mind and that’s absolutely true, thank you. Randy and I had a good time working together. He’s a wonderful person.

Franchise Fred: I believe it. I got to talk to him last week. Was your relationship with Randy more about the acting than the physical stuff?

Eric Roberts: As far as acting goes, Randy is a natural. He just walks in, learns his lines and he does ‘em. He has no issues about what he’s playing because he knows he’s just him basically. So he’s really intelligent about it. He’s really cool with it and he has fun. He has fun in that old fashioned way of, “Eric, isn’t this great?” “Yeah, Randy, it really is.” He’s a nice person with a nice outlook on life and he’s good to everybody. I really enjoyed working with him.

Franchise Fred: So he’s essentially being Randy Orton as Will Tanner, but you’re not being Eric, so what was your take on Frank Tanner?

Eric Roberts: My job as an actor was to play the conflict in the father/son. No, I was not playing myself because Randy and I laughed all day that we worked together. We honestly had a good time together. I would just turn it on for the camera, the A-hole that I was playing. Randy and I would laugh after each take, “That was funny, that was good.” We honestly had a good time like we were at camp.

Franchise Fred: But Frank gets some redemption, doesn’t he?

Franchise Fred: Besides Randy himself, what was your experience working with WWE Studios?

Eric Roberts: It was easy. They were organized. They were together and they obviously have a real future in moviemaking for their stars.

Franchise Fred: So really just like working with any studio?

Eric Roberts: Yeah, but it’s a little more hands on because you can actually see every dollar they spend. They’re very good about it.

Franchise Fred: Roel Reine told me they only had 17 days to shoot The Condemned 2. How many of those days were you working?

Franchise Fred: He also told me that the scene where you’re set up with the sniper rifle actually took more time to set up than to film. Do you remember that?

Eric Roberts: Exactly, good for him for telling you. Yeah, it did. It was very specific. I would say hours, probably four.

Franchise Fred: Does that phase you, having a lot of setup?

Eric Roberts: It’s just all a part of the package. I love every bit of moviemaking and I know what everyone’s job is and I know how hard and/or easy it is. I know everything about everything on the set and I pride myself in that so I can be a team player. I love movie sets.

Franchise Fred: At what point in your career did you get that sense of everyone’s job and how important it is?

Eric Roberts: Right away. I had interest in it right away but I’ll tell you what honestly got me. I worked with such a great crew on my first movie, the Sven Nykvist crew. He was director of photography and he shot all the Bergman films and stuff so he was very famous. He had such a great crew that I would act and I would go home, and act and go home. In my next movie, I was told, “Okay, hit your mark.” And I said, “What’s a mark?” I realized I had such a good crew working with me that they didn’t even tell me I had to hit a mark. They just kept me in focus. It was my second movie where I started to learn what I had to do as an actor. I didn’t even know because I had such a first great crew on the first movie, they picked up all the slack I was giving them because of my lack of experience. Isn’t that a funny story?

Franchise Fred: It is. You’ve done a lot of action movies and movies with guns, so did you have any special training for the sniper rifle?

Eric Roberts: No, I’ve been around guns my whole life. My grandfather and my uncle Albert are gun guys. So I’ve been around guns. I’m not a gun advocate and with all the school shootings, we have to change our gun laws. But guns have a place and some stronger than others for certain people. No, I didn’t have to get any special training.

Franchise Fred: What other scenes in The Condemned 2 were either physical or just fun to do?

Eric Roberts: My wife is reminding me of a really funny scene. When I’m under the truck doing repair work, Randy and I were playing around with the roller board that goes under the truck. Randy and I acted like eight-year-olds the whole movie. We just had fun together. We had very intense scenes so everybody thinks it’s an intense set. No, it was not an intense set. It was a very friendly, nice set. There was a lot of laughing.

Franchise Fred: Have you ever worked with actors who, when the scene is intense, they need it to be intense?

Franchise Fred: When the other actors needs it, can you adapt?

Eric Roberts: Of course I can. When the other actor needs it, you have to give it. It’s what they need and when you need an off camera line, you can feel free to ask them for it.

Franchise Fred: You have over 400 credits. Do you remember them all?

Eric Roberts: That’s such an unfair question because I don’t know. [Laughs] I thought I forgot something once, but I forgot, you know what I mean? It’s like that.

Franchise Fred: Was there a point where you noticed your output exponentially increased?

Eric Roberts: When I started just saying yes to a lot of stuff. When I started out in movies, I would make one movie a year, like you’re supposed to do. Then you do all your press for it and you get ready for your next film, whatever that is. That was really hard for me because I love acting and I grew up as a child in the repertory theater so I’m used to always working. It was hard for me and then when the whole industry just had a huge shift where there were no movie studios anymore, really, like there was no music industry. It was all gone. So everybody started doing it for themselves. With the advent of HD, everybody could afford a camera. So then everybody in America could make movies. There are hundreds and hundreds of movies being made right now all over the place and they’re real movies. They’re 90 minutes long with real actors and real sets and real costumes, real locations. They are real movies, and there are hundreds and hundreds being made right now in this country by independent people. I just went with the flow. Okay, we’re going to make five movies this year? Let’s go! I just started having fun with it because I love to work. I love being an actor as much as anything I’ve ever known about.

Eric Roberts: It’s as simple as just saying yes. Also, in between the stuff that’s of any merit, my wife also sends me all over the country, all over the world really to these people making little movies and they need a name or they need a real actor, and she sends me. I give them a little value and it’s wonderful to work with these people and to be a part of, from the ground up, this new era of home movie making.

Franchise Fred: I was always curious, why didn’t you do Best of the Best 3? Phillip Rhee did two more!

Eric Roberts: Did you see 3 and 4? If you see them, that will answer your question.

Franchise Fred: When Sly calls you to do The Expendables, did he remember you from working together on The Specialist?

Eric Roberts: That’s why he called me, because we’re friends. He says, “Eric, please, come make a movie with me.” He’s a great guy. I love Sly.