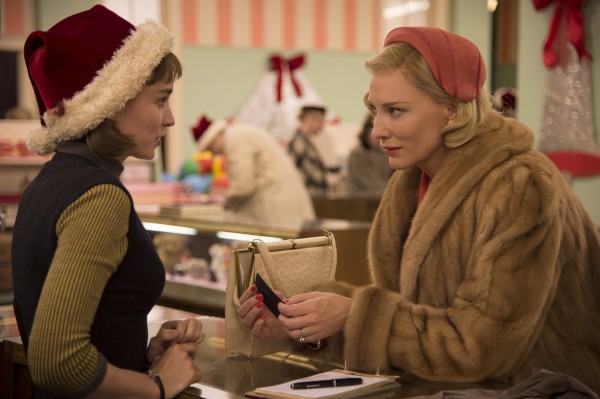 I’m always nervous when there’s a movie with finely tuned period details and acclaimed performances about an important subject. It always feels like that movie is going to be cinematic medicine, an exercise in production design. Carol has those elements but is so engrossing, it transcends the superficial trappings of its construction.

Therese (Rooney Mara) works in a department store at Christmas. When Carol (Cate Blanchette) leaves her gloves behind, Therese returns them and becomes closer with Carol. Both women are exploring feelings for each other in a time when society would simply send gay people to psychiatrists, or worse. Carol was married to Harge (Kyle Chandler) and they have a daughter, Rindy (Kk Helm), which Harge uses to manipulate Carol in their divorce.

Right away, the period detail immerses you in Therese and Carol’s world. We open on a New York intersection all dressed in 1950s holiday festivities, with all the right cars, costumes and perfectly coifed hairstyles. From there, you simply believe that Carol and Therese live in the 1950s. While that sort of attention to detail is sure to garner well-deserved Oscar nominations, it serve the correct purpose, which is to establish the world and then get out of the way.

The courtship between Carol and Therese is subtle as they’re feeling each other out and stealing touches as they pass by each other. Maybe I take it for granted how easily we buy a love story between Blanchett and Mara. Yay for progressive times where it doesn’t seem like a big deal, but I should also credit the subtlety of both performances, that they’re not playing up how significant it is to portray a lesbian relationship on screen at any time.

Chandler is vital in Carol and I’m afraid he may not get enough credit for his role. He conveys the confusion and frustration a man in the ‘50s would have. For more of Kyle Chandler’s excellent work, watch Bloodline on Netflix.

When I first saw the Super 16mm footage, I thought it looked like 35mm. Then I saw more grain in some of the scenes, but I guess compared to the digital footage I’m used to now, any film looks aesthetically pleasing. Director Todd Haynes and cinematography Edward Lachman choose some interesting framing to direct your eyes to windows within the frame.

There are points where some of the precision of the filmmaking can feel a tad soulless, like it’s executing the perfect machinery. That’s the sort of worry I had above, but it is minimal in Carol. Whenever it starts to linger too much on the technique, the story pushes along and gives the characters more to convey.

Still, “that forbidden love story between two 1950s women” might be a hard sell, and the inevitable awards buzz may only reinforce worries that it offers more for the craftspeople than the viewer. All I can say is I was worried about that too and Carol won me over from the first establishing shot, let alone when I got to know Therese and Carol. I would encourage people to get to know them too.