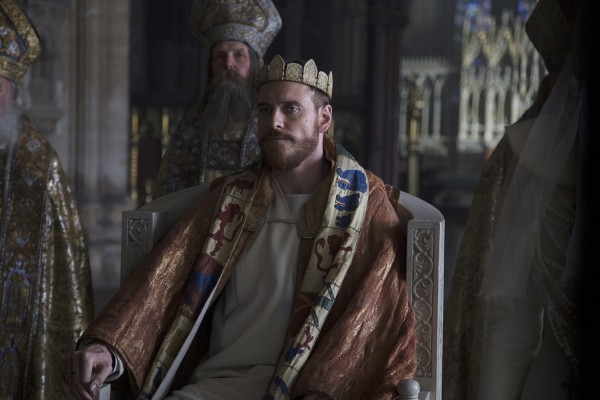 When I was forced to read Shakespeare in high school, it just seemed like intentionally confusing language to make it harder to follow and seem deeper than it would be if spoken economically. You’d think as Franchise Fred I would at least be into the Henry and Richard sagas but cinema has actually deepened my appreciation for the Bard because it shows what each filmmaker got out of material that didn’t speak to me. It’s speaking my language, except for the language. I’m still not a Shakespeare fan but I like to see Kenneth Branagh, Baz Luhrmann or Ralph Fiennes’ passion projects. I didn’t like Justin Kurzel’s Macbeth though.

While it is a more traditional era Macbeth, the film makes the worst choice in cinematic adaptation. You know what they can’t do on stage? Shaky cam! Why stare at theatrical actors on a level stage when you could see even less with a camera jerking around?

It is a very sparse MacBeth, which feels appropriate but it’s ugly to look at. If these events did unfold in medieval Scotland it wouldn’t be lavish. It would be the grimy, dirty tents where most of this takes place. Even the palace looks moldy. Take away all the lights too. Just use candles and shoot outdoors on the most overcast day of the year. Sorry, Macbeth 2015 is no Barry Lyndon.

Macbeth wasn’t one of my high school assignments so I’d never unpacked the story, but I got the gist of it fine in the movie. It’s basic treachery and you can see Macbeth’s character change after he attains power, thanks to Michael Fassbender’s performance.

There is as much silence as there is dialogue, which helps convey the plot visually but also you’re already cutting the play in half via running time, then half again while nobody’s talking. The key soliloquies are there, the dagger I see before me, the damn spot, the sound and fury. Even if I could follow the language I couldn’t hear it. Everyone mumbles. Because the problem with Shakespeare was always too much enunciation. But it’s real, man. Real people don’t project to the balcony. They also don’t have iambic pentameter ready to go on the fly, so gritty realistic Shakespeare is an oxymoron.

The most off putting aspect of this Macbeth, even more than the shakeycam, is the morose score by Jed Kurzel’s. Any passion left in the performances is sucked out by the low energy score.

And to think, I missed The Last Witch Hunter but I saw this witch movie. I’m still superstitious though so let’s call it The Scottish Movie.