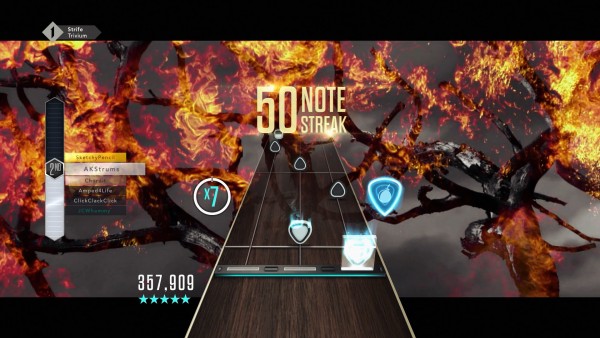 As far as I was concerned, all the Guitar Hero franchise ever had to do was keep coming out with new songs. It would be forever playable as long as songs were added after we’d gotten perfect scores on the previous songs. But Guitar Hero kept reinventing, adding a full band for World Tour, and now a whole new guitar for Guitar Hero Live.

The best part about Guitar Hero Live is that it comes with a free cat bed. Once I put together the guitar, which is a very easy assembly, I didn’t throw the cardboard box away, and I never will. Tippi loves it!

The most significant change in the new guitar is there are six notes, but it’s not a sixth note added to the end. It’s redesigned so that two sets of three buttons lay atop each other on the neck. This is a tad more like a real guitar, but nothing like Rocksmith so it’s still just for fun.

Just like I learned the original guitar, I was amazed to feel my hands learning how to recognize up and down notes. The tutorial teaches you the new guitar fairly quickly, but it’s really hands on experience more than anything. I stopped shaking my pinky within an hour as I got used to using my three middle fingers only.

Once you get the hang of it, you can tell when the note tracks are going to move your fingers from upper to lower notes and vice versa. Sometimes it feels like it’s just random, but that just means you have to develop a more sophisticated musical ear. While the game notes are only an interpretation of the music, it still makes sense how they make chords that fluctuate with the songs.

It means that if there are any songs that were in the old Guitar Hero games, you have to learn them completely differently. Even though it’s a new live version, “Hit Me With Your Best Shot” is a wildly different note track. “Cult of Personality” is significantly adapted too, because now there are exponentially more combinations of notes to make.

You eventually just feel your fingers dancing along the new guitar. I step one finger down, then the other joins it for a different chord. My biggest mistake is holding both upper and lower notes down unintentionally, and then of course missing it when it is a double note, but I still make the same old mistake of hitting notes too early too. Some things never change. Just like that familiar clicking of the strum bar along with the music.

I used to play Guitar Hero on Hard, but not Expert level. Guitar Hero Live defaults to Regular, and it’s a satisfying game for now. I’m sure I’ll work up to advanced. I have two completely new games to look forward to once I master Regular, because Advanced and Expert will have all new notes. On Regular, I actually haven’t failed out of a song just yet. I came close once.

The new game also accounts for earning rewards. You can use earnings in career mode to buy single plays of catalog songs. You also have to earn Hero Powers with experience points. Double multiplier doesn’t even become available until level 13. Otherwise, why would you use any other Hero Power? 2X will earn you more coins and experience points, but until I get there, the bomb is neat.

The songs are a good mix, but I’d always take more classic rock. Like previous Guitar Hero and Rock Band games, Guitar Hero Live is introducing me to music I wouldn’t otherwise listen to, although I haven’t discovered any new music I love because of the game yet. The Kongos got me into a good rhythm though.

Guitar Hero TV might become more of a draw when there are more channels available. For now it seems like something I’d only use as a break if I’m stuck somewhere in career mode, but more channels will come. A snafu in the catalog list, bands with names starting with The are listed under T. That’ll make them harder to find when the catalog grows overwhelmingly.

The live-action footage during career mode is actually a little distracting to me. I mean, I’m zeroed in on the “highway” with the notes pouring down anyway, so I’m not trying to watch a live-action concert. The footage can be distracting, and time consuming as it follows you on stage in real time, but I suppose it’s not any more down time than in the animated version.

I always joked that they should make a game called Groupie Hero. This is what I get as they captured footage of backstage flirts giving you the eye. The point of view camera when you jump into the mosh pit is impressive cinematography, and the quality of the footage is better than Blu-ray, but I just find it creepy when they look directly in the camera. Especially you, Ms. Portland Cloud.

Guitar Hero Live is going to be an ongoing project. I am going to continue getting better at the game and finding new aspects about it, earning more rewards to experience and trying more difficult levels. There will be new songs added so I’ll want to review the latest additions more specifically. Check back for future Guitar Hero Live reviews at Nerd Report.